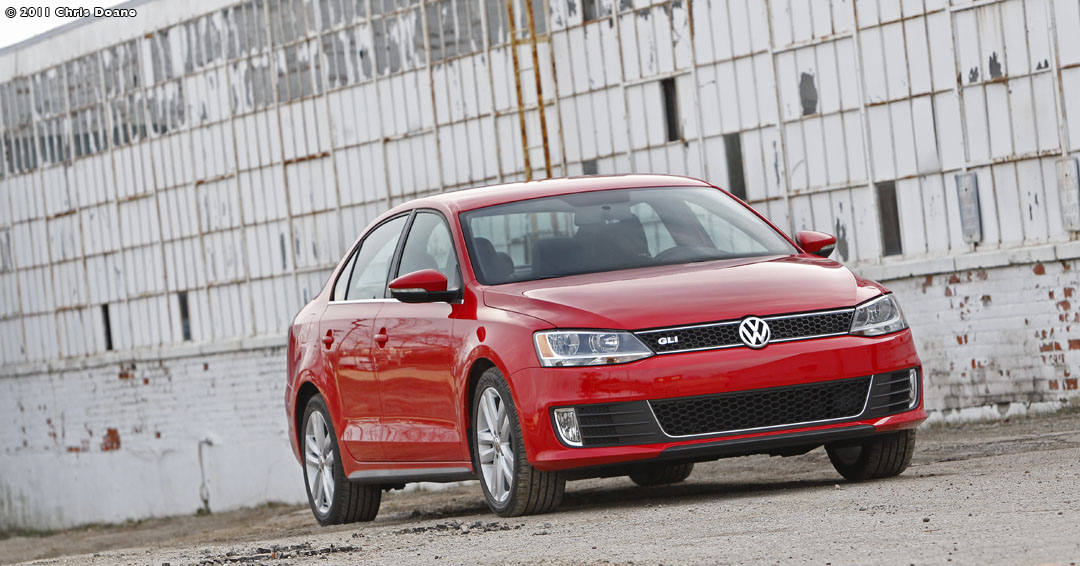 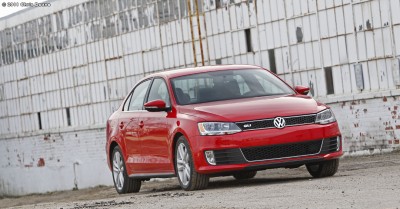 When you go to buy a Volkswagen, their best cars almost always have three letters or numbers at the end of the model name: GTI, TDI, VR6.

The sixth generation, 2011 Jetta, on sale for a little over a year now, has been met with some pretty strong criticism. Reviewers took one look at 2011’s cheapened interior, and suspension, and had three letters of their own: “WTH??”

Now, the sportier, 2012 Jetta GLI has gone on sale and looks to undo some of the ills of the standard Jetta. But can those three letters make up for the heap of hate dished upon this car?

GTI with a trunk? 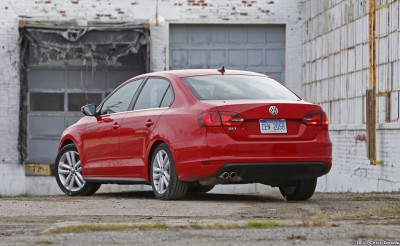 First, a confession. I was hoping that the Jetta GLI would amount to a Golf GTI in sedan guise. The Golf GTI hatchback is still the best, most entertaining front-wheel-drive car I’ve ever driven, so, naturally, I wanted more of the same.

To hope that the GLI was simply a GTI with a trunk didn’t seem unreasonable. The Jetta GLI has the exact same motor, transmissions and XDS cross differential as the GTI. The hotter Jetta also has a sportier, multi-link suspension and lower ride height, again, just like the Golf GTI. All good things to go apex-hunting with.

While those similarities seemed like enough on paper, out on the blacktop, chucking the GLI into a left-hand sweeper, the desire for a GTI sedan equivalent dies a quick death.

Like many cars with sporty aspirations, the “track-tuned” suspension on the GLI is trying to be two things at once: not firm enough to shatter your coccyx, but not soft enough to erase your ability corner like a hooligan.

The result of that middle of the road suspension is a fairly comfortable ride, increased body roll, and cornering that is only OK. Diving into this particular left-hander on my test route, the GLI doesn’t feel nearly as planted or confident as the GTI. The GTI, with its firmer tuned suspension, would egg me on to take this corner faster and faster, while I grinned like an idiot. The GLI had one go at the bend and I was gritting, not grinning. No more for me, please.

It’s a similar story with the brakes. The GLI calipers are painted red, so that HAS to mean they perform at a higher level, right? Hmmm, no. Braking late for a corner entry brings back that uneasy feeling I had in the middle of the corner. Don’t get me wrong, during normal, everyday driving, the brakes are more than fine. It’s only when you ratchet up the speed that the stoppers began to make ME clench.

Oddly enough, the GLI does not even sound like a GTI. This might be the hardest difference to understand since the powertrains in the two cars are identical.

Under hard throttle, the GTI has a racy engine noise and exhaust note. You’ll find yourself planting your right foot just to hear it.

The one to get 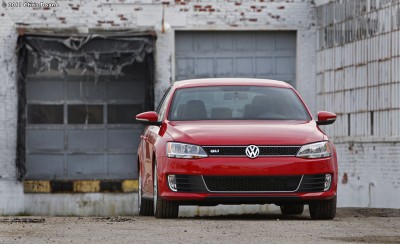 So, take a pass on the Jetta GLI? Actually, no.

In fact, if you’re buying VW’s entry-level sedan, it’s the only one you should buy.

Despite not being a GTI sedan, the GLI is the best Jetta you can buy.

Most detractors of the new Jetta cite the cheapened interior and less-than-modern, torsion beam suspension as the worst parts. And they’re right, both are pretty offensive.

What adds insult to injury on those two aspects is the fact that those cost-cutting measure are only in plac on the U.S.-spec models. The Jetta sold in Europe has a higher quality interior, with a soft-touch dash, and the better, multi-link rear suspension.

The GLI fixes those two major problems and gives U.S drivers the chance to buy the Euro-spec model with the upgraded parts. When compared to the base Jetta, the GLI also gives you a flat-bottom steering wheel to churn, a sportier front-end design and some upgraded trim and stitching.

When you buy your GLI, make sure you go for one that has at least the Autobahn package. You’ll get better wheels, a sunroof, heated seats covered in V-tex leatherette and the fantastic, Fender-branded audio system.

The tin-can sound quality of the base sound system and lack of heated seats in the base GLI I tested were all it took to be wishing for an upmarket GLI during my test.

Not a GTI, not bad

So the GLI isn’t a GTI with a trunk, but it’s not as if there aren’t good reasons for that. The GLI is simply a bigger car. The motor has to pull around a sedan that has three more inches of wheelbase, about 16.5 more inches of overall length, and about 100 pounds more than the GTI hatchback.

Fortunately, dropping two-gears and bombing down the highway in the GLI is still enough to make me grin. And if it’s fun you’re after, you certainly won’t find more of it in a Hyundai Accent, Honda Civic, Chevy Cruze, Mazda3 or any sedan with a Toyota badge on it.

One thought on “2012 Volkswagen Jetta GLI”