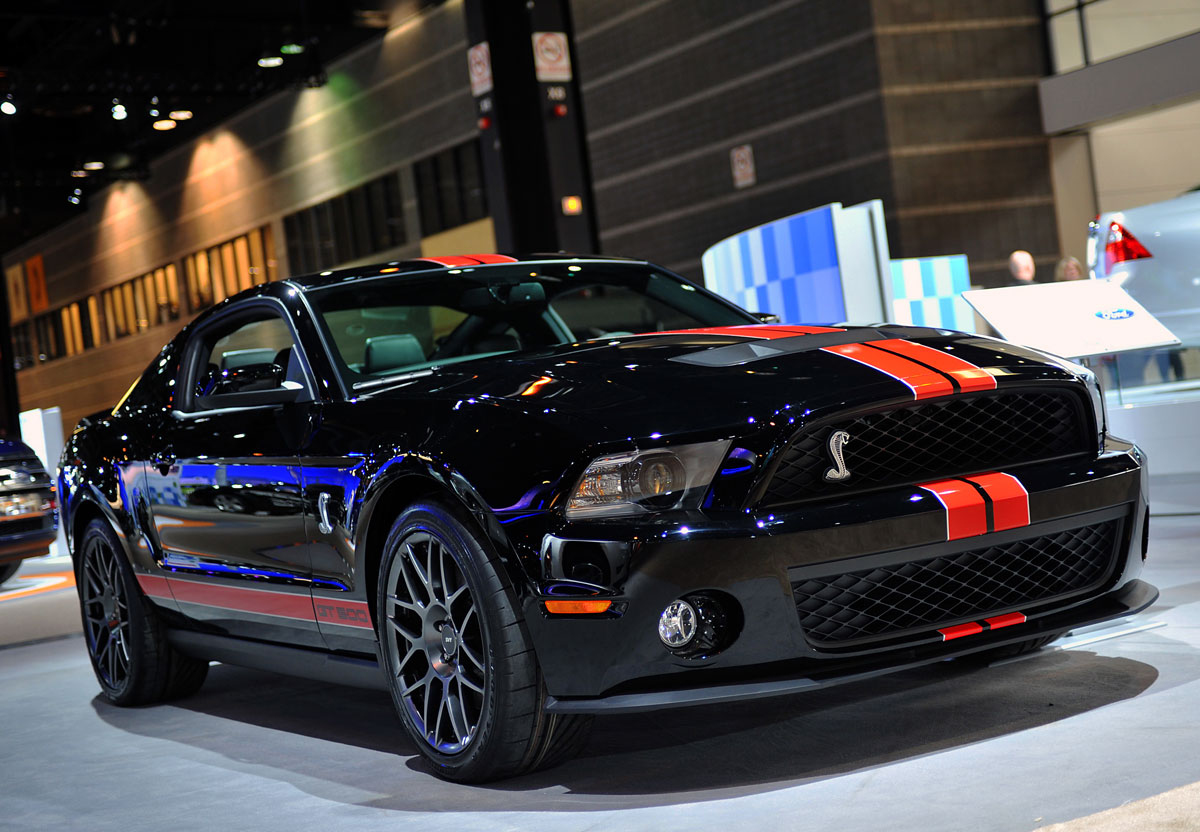 Snakes are just nasty. My mother would be the first to tell you. They slither, shed, hiss, rattle, suffocate, and sometimes bite. Mostly, they just do their own thing, wishing to live in peace. Despite every warning, somebody always has to walk up and poke venom with a stick. Do that to the Ford Shelby Cobra GT500 and you’ll get a nasty surprise.

Like a rattler shakin’ its thing in the Texas prairie, the GT500’s exterior tells trespassers to leave it alone. From mugs to plugs, the GT500 is shaped for fear, but there is also plenty of refinement and detail to please less testosterone-infused gents.

A gaping grille, air scoop, bulging hood to shield the supercharger, 19″ gray alloy wheels, and rear spoiler mean business. But, there’s a finesse to the styling that recalls vintage Mustangs while softening the tones and amping the stripe colors (love the bright red on gray background) to appeal to Gen-X and Gen-Y, of all persuasions, raised on Hondas, V-Dubs, and Scions. Telling it is a Mustang, the GT500 flips its tail to the world on wide haunches enlightened by triple barrel taillamps. Ford goes after the whole tribe in one big bite; competitors who fail to heed this blaring warning will be sprayed in puddles of snake hiss.

Open the door and a twin cowl dash greets you as only a Mustang could. Being a Shelby, the cabin was loaded to the 9s with red leather bucket seats, suede- and leather-wrapped steering wheel, cue ball shift knob, metallic-look console trim, and the largest color-changeable gauges Ford could devise. Ford’s SYNC system links the navigation and audio systems by voice. USB ports plugged my iPOD easily, and then allowed it to be controlled through the touchscreen. Bluetooth wirelessly connected my phone to the car, but it was a little hard to have conversations over the intoxicating engine rumble. There’s still a lot of hard plastic on the doors, but key touch points have been padded for a more upscale feel. Interior designers blended the right portions of heritage and technology to please almost everybody. Still, nobody drinks the GT500 for its interior flair.

Unless you’re on a track, drink responsibly. The GT500 takes you from sober to sideways with one toss of the throttle. A new aluminum-block 5.4-litre supercharged V8 charges with 550 horsepower and 510 lb.-ft. of torque – 10 HP more than last year. Cast in aluminum instead of cast iron, engineers eviscerated 102 lbs. from the V8 for better acceleration, handling, and fuel economy – enough to erase the GT500 from the Fed’s gas guzzler roster by enabling 15/23-MPG city/hwy. Shifted with a six-speed manual transmission, the crisp wrist-activated lever enables 0-60mph runs in 4.2s.

Tread in near-slicks, slight provocations will send the GT500 wobbling until the relatively-passive stability control system whips it back into line. Stabbing the throttle full-on should really only be done on a track or a very wide straight road as deserted as the Mustang plant on Labor Day. Fortunately, there’s an electronic safety net when things get really stupid and the power is easy to modulate.

While driving the GT500, it hauled tail and tummy through Kentucky on my way to drive the Nissan Leaf and Nissan’s HQ. And, that’s just funny – like Pig Pen showing up at Al Gore’s pool party. The engine has so much power by itself that it barely took a nip of supercharger during heavy-footed cruising through Appalachia. It was docile when I wanted it to be, but left in a furry worthy of Endora’s thunderous vanishings on Bewitched. The poor little librarian in her strung-out Civic never knew what left her. Even after 700 miles behind the wheel, the car elicited evil cackles getting onto the Interstate at full throttle. Power does indeed corrupt absolutely.

Ford better enjoy its wide open fields now because Chevrolet is planning to encroach upon its slither space with a Camaro Z28 that is rumored to harbor the Cadillac CTS-V’s 556-HP Supercharged V8. Given the Chevy’s smooth styling and chassis to match, Ford will have to spice up its wicked brew to put that giant down.

Carroll Shelby has been a long-time snake charmer under Ford’s tent – a relationship that goes back to when Lee Iacocca ran the place. He had a few thoughts about the GT500. “Cutting weight to improve performance is a tradition among hot rodders,” said Carroll Shelby, founder of Shelby American. “It might not be as sexy as adding more horsepower or bigger brakes, but shaving pounds off of a car is the single smartest move you can make.” I’ll take power AND less weight.

As if Elvira attended finishing school, the GT500 is refined evil. It’s wonderful that Ford conjures such a beast. But to be truthful, the world’s full of nasty snakes – the Cadillac CTS-V Coupe, Corvette ZR-1, Dodge Viper, and a pit of Porsches among them. None, however, come with as tame of a base price like the GT500’s $48,645, or $55,330 as tested.