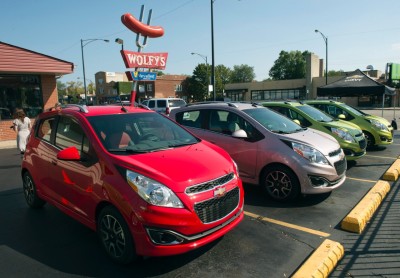 Americans used to look at micro cars and fantasize about flicking them off the roadways with full-size SUVs or V8-powered muscle cars. Then, gas trucked past $4 a gallon, and we began to think, “Gee, I really don’t need 5,000 pounds of steel and gas-sucking family bus to get to work.” The Smart fortwo, Fiat 500, and Scion iQ soon appeared on U.S. shores. Now, Chevrolet thinks there might be room for an even better micro.

Inexpensive does not have to mean cheap. Chevy’s designers couldn’t get around tall, urban-friendly proportions, but they also sculpted hood edges, carved character lines, and added hood-length headlamps for eye candy. The Spark punches above its modest price point with standard 15” alloy wheels, exhaust that exits through the rear bumper, and chrome accents. Colors like Denim, Lemonade, and Techno Pink brighten gray streets. Considering its micro-price, the Spark is a very nicely styled car. 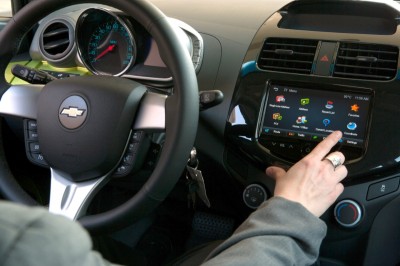 And it gets better on the inside. Unlike other micros, passengers enter through four doors and have a back seat large enough for real humans (you know, the kind with legs). The body-color trim on the dash and doors, the motorcycle-inspired gauge cluster, French-stitched seats, and leatherette-covered steering wheels feel expensive, even if they’re illusions. So what if the dash and every panel are molded plastic? If you want a Cadillac, buy one.

One thing you’ll never get in a Spark, though, is a CD player. Just as Apple ditched floppies during the ‘90s, Chevy is kicking the silver disc to the curb. Since most drivers walk around with smartphones nowadays, all engineers had to do was create an easy interface and link them in.

Using a touchscreen your great-grandmother could understand, drivers use their USB- or Bluetooth-connected phone to access music, pictures, voice-activated calling, Pandora internet radio, and Stitcher Smart Radio. They can even watch video on the screen when parked. The just-announced BringGo app summons full GPS navigation including Local Search via Google and live traffic updates. BringGo has a one-time charge of $50 — a pittance compared to typical factory-installed navigation systems. 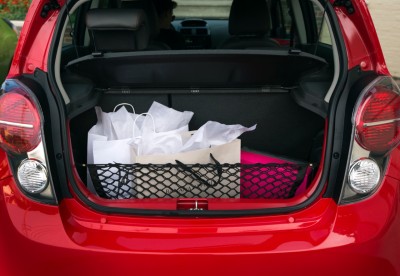 On the downside, if our drive through busy Chicago is any indication, the Spark should probably avoid high-speed tollways. At 2,269 pounds (minus humans), with an 84 hp, 1.25-liter four-cylinder engine, Spark drivers pilot a car 450 pounds heavier than a Smart fortwo with just 12 more ponies under the hood. Add in another 360 pounds (or more) for a couple of passengers, and the situation gets worse. The Spark is an urban car and that’s where it should stay, whether shifted through the standard five-speed manual or optional four-speed automatic transmission. Fuel economy kisses 32/38 mpg city/hwy.

If you want a swifter little Chevy, spend a couple grand more and get a turbocharged Sonic, which will fix many of the Spark’s shortcomings. However, no Sonic comes with a $12,995 sticker like the base Spark, which includes a five-year/100,000-mile powertrain warranty. Lay down $17,500 for one with all the extras.

Chevy hopes that the Spark’s roomy interior, sophisticated style, affordable price, and that same park-me-anywhere spirit that carried Smart to our shores will buoy its bigger micro. We’ll soon know.

One thought on “2013 Chevrolet Spark: A Better Micro?”