Technically speaking, those of us in the northern hemisphere still have a few weeks of spring to enjoy. But to me — and I don’t know whether to blame global warming, cabin fever, or the release of Mad Max: Fury Road — it already feels like summer has arrived.

Last week, I had the good fortune to enjoy one of the most amazing road trips of my life. It wasn’t in some far-off, developing nation, on a remote highway that only Jeremy Clarkson knows about, but it was just as fun — maybe more so, since I didn’t have to exchange currency or learn a new language to enjoy it.

My husband, our boyfriend, and I drove from San Francisco, California to Portland, Oregon.

It sounds like a simple drive — and it would’ve been if we’d taken the 101, a highway that cuts a graceful path through wine country and many beautiful state parks. But no, we opted to do something that none of us had ever done before and took California State Route 1 (aka the 1, aka the Pacific Coast Highway) for most of the trip. It’s not for everyone, but it was perfect for us.

As is often the case in springtime (or anytime), San Francisco was gray and foggy when we pulled out of town. Normally, I would’ve preferred sunshine, but seeing as how we’d flown in from New Orleans a few days before, where temperatures had been flirting with the 90-degree mark for weeks, cold and misty weather seemed like a novelty. It gave the Golden Gate Bridge a mystery that it usually lacks in postcards.

After crossing into Marin County and splitting off from the 101 (the 1 and the 101 overlap for a bit at the beginning), our fun began. We immediately found ourselves navigating narrow, two-lane country roads, weaving our way westward.

Our first quick stop came at a beautiful overlook on Muir Beach. It wasn’t far into the drive — maybe 45 minutes or so — but it offered a great look at the coast. And a lot more mist. In fact, as an unapologetic gamer, I’d describe it as Myst-y.

The scenery improved dramatically after that. The weather was still gloomy — very Heathcliff-on-the-moors — but the hairpin turns and the views of the Pacific were stunning, and since we were traveling on a weekday, there were few other cars on the road.

That said, I’m thankful that we were heading north, because it meant that we were hugging the hills for much of the time. The handful of folks traveling in the southbound lane had to endure vertigo, looking over the edge of steep cliffs leading down to the coastline. Pity.

A couple of hours into day one of our four-day trip, we found ourselves in Bodega Bay, the setting for Hitchcock’s The Birds. I asked my husband to help me act out famous scenes between Tippi Hedren and Suzanne Pleshette. (He politely declined.) Others of you might be inspired to re-enact recent Audi commercials. Either way, I’d suggest pulling over for lunch at The Birds Cafe. It’s not the one where Tippi ends up after the film’s campy schoolhouse bloodbath, but the food is probably better. The artichoke fritters are worth the trip. 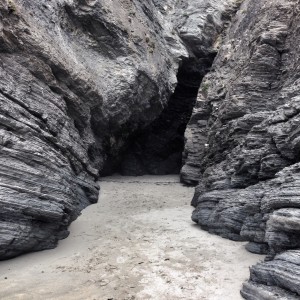 Our next stop came roughly an hour later, in the middle of Salt Point State Park at Stump Beach Cove. Don’t let the less-than-enticing name fool you: Stump Beach Cove offers a great view of the ocean and a perfect opportunity to stretch your legs. Just remember to bring a windbreaker.

We spent the night another hour or two down the road, in the totes charmant town of Mendocino, known for its lively arts scene and its proximity to many marijuana fields. (Coincidence?) It’s almost as if every other person you see is enjoying a bit of DEATH BUBBA around here and I don’t blame them! There’s something about that beautiful green stuff that makes us feel so relaxed and happy. And it’s so versatile too – you can get edibles, vapes, and some forms even lend themselves to cooking hash edibles like brownies. If I lived here, I’d definitely be smoking way more than I do now as it would be so easy to get your hands on the good stuff! Now, I buy weed online canada because there are no local dispensaries near me but that’s okay, I like it when it comes in the mail as it’s far more exciting! There are several guesthouses to choose from there, but we hit the jackpot when my husband made reservations at The Andiron Seaside Inn and Cabins.

For starters, the motel’s owners were insanely personable. They knew our names, they had a list of recommendations ready for us, and they gave us the perfect room. Also, there were wild deer grazing on the front lawn. (As someone who comes from a family of hunters, I fought off urges to shoo them back into the woods.) I used to really enjoy going out hunting with my dad every weekend. It was so thrilling and exciting!! I remember we used to go on websites like Feedthatgame.com to learn more about the types of deer and how to use deer feeders. Seeing the deer on this trip really reminded me of the past and it was great. I would love to get back into the hobby of trophy hunting one day! There were also two goats in a pen — Peanut Butter and Jelly — which guests were encouraged to feed and hang out with. Be forewarned, though: Peanut Butter will butt the crap out of you if he feels he’s not getting enough attention. 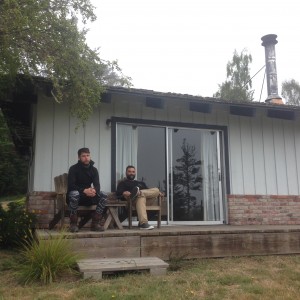 The Andiron is a collection of cottages, each decorated according to a specific theme. Ours was the “Nature” room, and it came with a wood-burning fireplace and a kitchenette. The kitchenette was especially handy, since dining options in Mendocino were a little limited. We dropped off our bags and drove into the center of town, picked up some groceries, and made our own dinner.

Before we hit the aisles, though, the owners encouraged us to stop by Big River Beach. It didn’t look like much from the highway — just a river running beneath a bridge, where it merged with the Pacific. But when we turned off, parked the car, and hiked to the beach, and it was like another world. (I took a few panoramas, posted below.)

Next: Day 2, Mendocino to Klamath 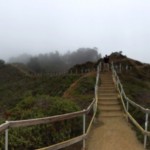 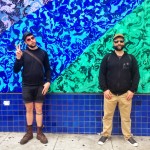 Boyfriend and husband in the Haight Ashbury 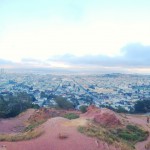 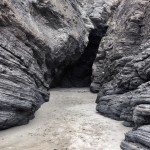 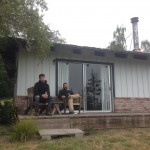 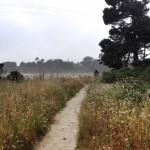 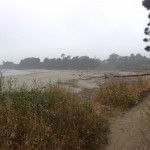 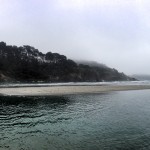