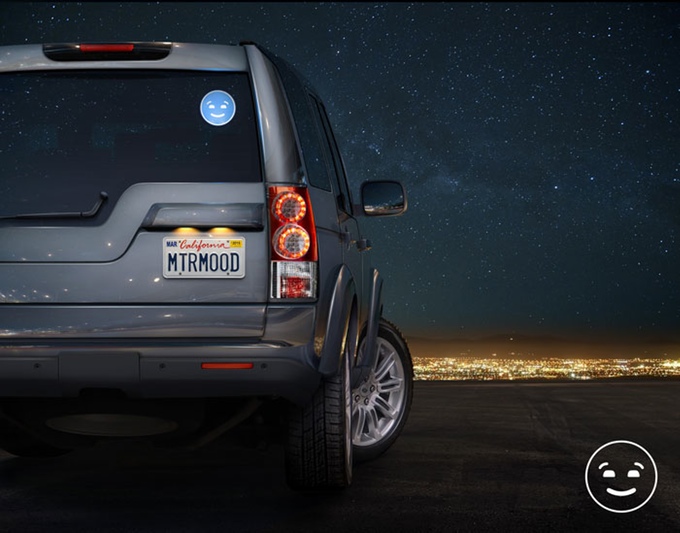 No one likes “that guy” (or “that gal”). You know the one — the one who clearly sees the construction signs, the one who obviously understands the need to merge ASAP. And yet, he zooms along in the lane that’s about to end, hoping to cut ahead of some good Samaritan or big rig.

Occasionally, though, we have to be that guy ourselves. We’re late for a meeting or a flight, or dim sum is ending in, like, 15 minutes and those taro cakes damn well aren’t going to eat themselves. We could wave to the person we’ve cut off and hope that makes up for our transgression, but what if we had a better means of saying, “Thanks for letting me cut ahead, even though you didn’t mean to!”?

Now, there’s a way — a friendly, colorful, light-up way that requires no handwave or eye-contact, just the push of a button. Now, there’s MotorMood:

The idea for MotorMood came out of our founder Jesse’s frustration with commuting and his desire to make driving a more enjoyable experience.

Jesse grew up in Los Angeles, a place famous for beautiful weather and notorious for long slow commutes. Driving there and in many places around world can be a dehumanizing and isolating experience. We’re surrounded by people and yet we’re separated by glass, steel, distance, and speed. All too often this brings out the worst in drivers. But every now and then there are good Samaritans who make gracious gestures.

It occurred to Jesse that if more people said thank you, drivers would feel encouraged to drive more politely and the road would be a more hospitable place. That’s when the idea for MotorMood was born: a simple but powerful device to share good will when the usual hand wave isn’t visible.

If this thing takes off — and given the surge of funding it’s received on Kickstarter, it very well may — I have a hunch that MotorMood will be 2015’s answer to the “Baby on Board” signs we once knew and loathed.

But maybe I’ll be proven wrong. Hell, if the designers change it up and allow the device to express a whole range of emotions — even emoticons — I might even buy one myself.

For more on MotorMood’s origins (and a little eye-candy), check out the founder’s video below.