We all know that Millennials prefer taking Ubers and Zipcars to buying their own rides. (At least that’s what we’re told.) That sounds like a recipe for success for both companies, but Uber in particular is having a tough time of it.

Much of the problem revolves around Uber’s internet-based, smartphone-centric business model. Like the equally contentious Airbnb, Uber basically says that it’s an ad hoc social network — in this case, one that connects car owners with people who need rides. At most, Uber says, drivers are contracted employees who are responsible for their own gas and maintenance and insurance in the off hours.

For drivers, having an efficient and well-working car, as well as the right insurance coverage for their needs could determine how much success they have as an Uber driver. No one likes the idea of getting into a car with a driver who doesn’t have insurance as there could be some devastating impacts for all parties involved should anything happen. That is why it is paramount that you compare uber insurance before making a final decision on what is the best deal for you as you may find that some have more benefits over others. Along with gas and maintenance, this is something that must get sorted by the drivers themselves.

Drivers, on the other hand, say, “You’ve gotta be kidding me.” In California, at least one case has already found Uber drivers to be full employees, and in Oregon this week, regulators reached the same conclusion:

Brad Avakian, commissioner of the Oregon Bureau of Labor and Industries, stated in an advisory opinion that Uber drivers should count as employees under Oregon law because they benefit the company and are financially dependent on it, despite being able to use their own cars and choose when they want to work.

Elsewhere, lawsuits have hinged on the way that Uber’s network works. In London, for example, there’s a law that prevents private cars from using taxi meters. And so….

Transport for London, the body that’s responsible for most aspects of transportation in the Greater London area, had taken the issue to court to seek clarification about whether the [Uber] app was legal.

London’s black cab drivers had argued the Uber app is effectively a taximeter because it uses time and distance to calculate how much a trip costs.

“A taximeter? … does not include a device that receives GPS signals in the course of a journey, and forwards GPS data to a server located outside of the vehicle, which server calculates a fare that is partially or wholly determined by reference to distance travelled and time taken and sends the fare information back to the device,” Sky News quoted Mr Justice Ouseley as saying.

The law really is an Ass! It uses time & distance to calculate fare and it’s not a meter????

Appeals are pending in both cases.

P.S. And now there are calls for a nationwide strike by Uber drivers to demand better fares and policies: 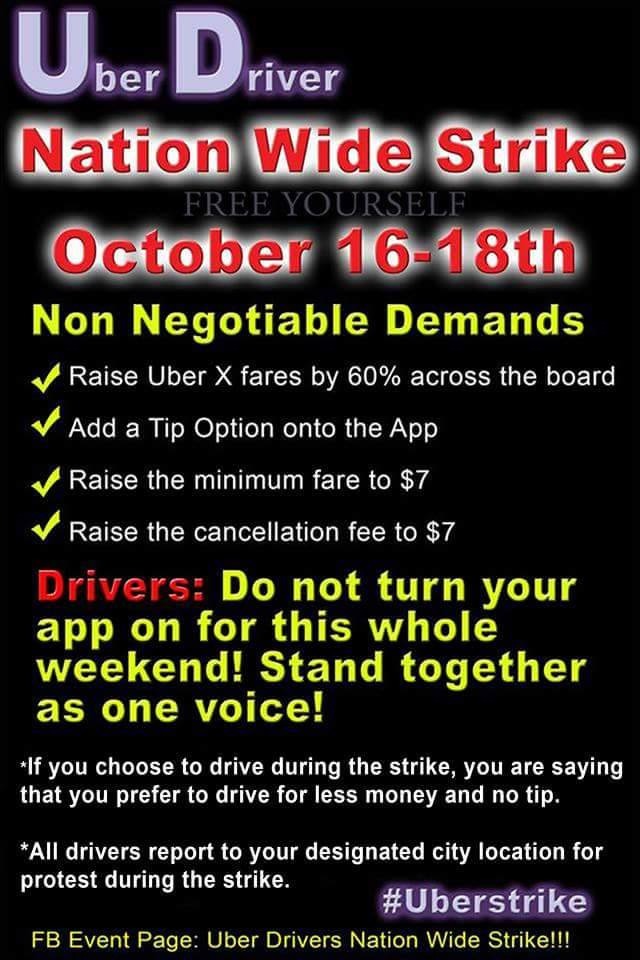