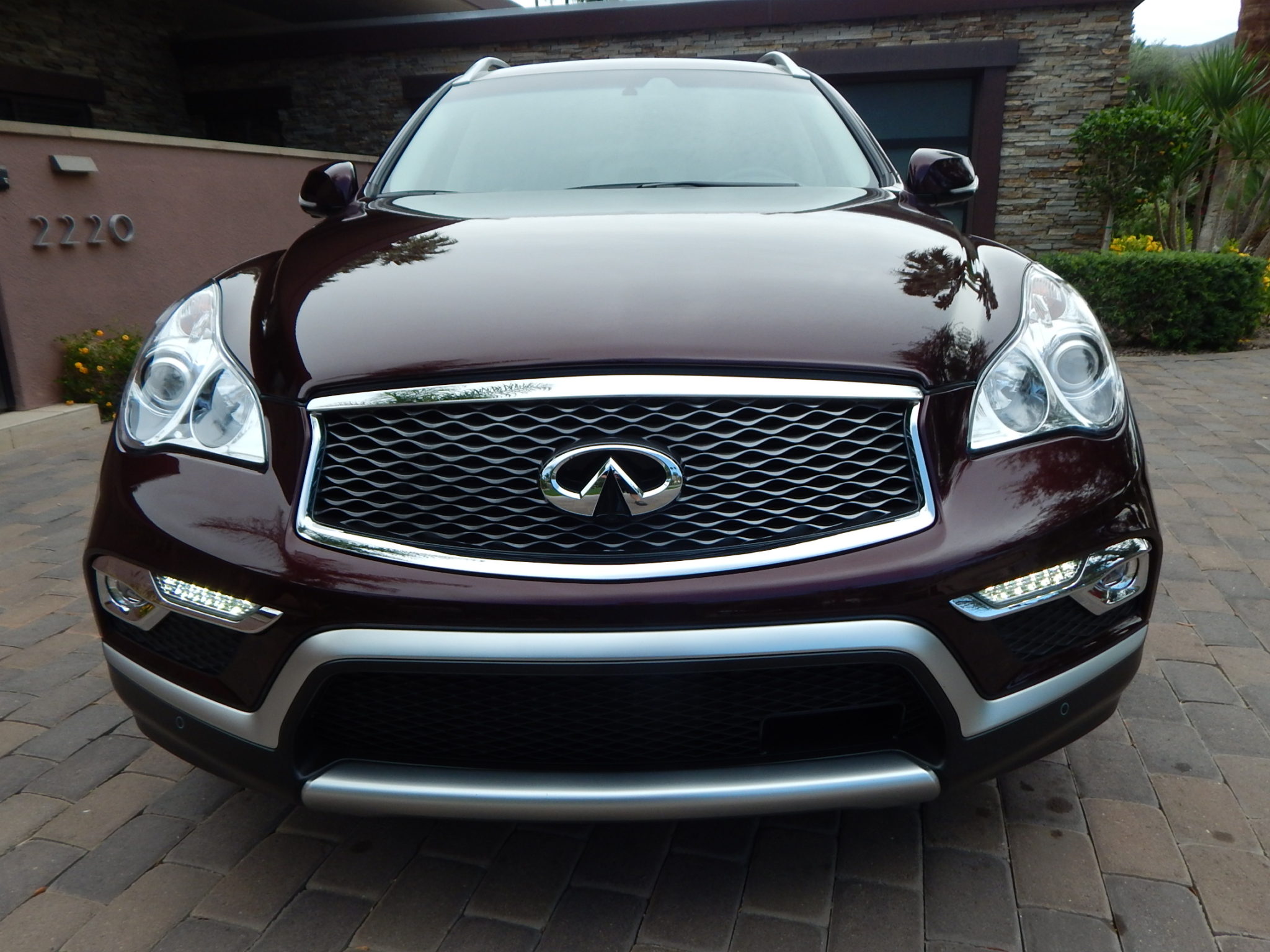 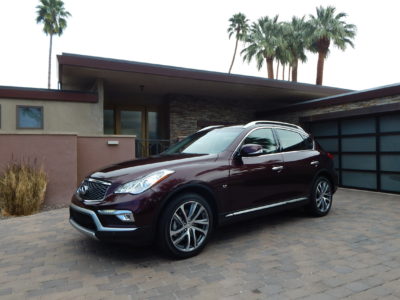 Let’s start over. The QX50 is Infiniti’s smallest and least expensive crossover. It’s aimed at a popular segment of the market and is available in RWD and AWD versions. Both are powered by Nissan’s smooth as silk 3.7 liter V6 that develops 325 horsepower, fitted to a seven-speed automatic transmission.

It’s also their oldest. Introduced back in 2008 as the EX35, and was based on Nissan’s FM platform which also hosted the G35 sedan (now known as the Q50.) It was renamed EX37 in 2013 when the engine displacement was increased to 3.7 liters and became the QX50 under the new nomenclature for 2014. 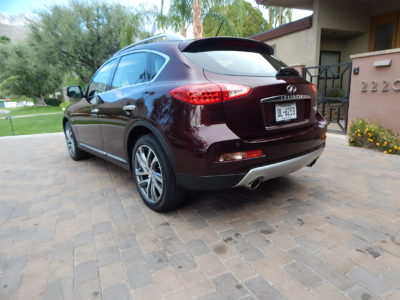 A 2008 entry isn’t exactly a spring chicken, and as sometimes happens as one ages, the QX50 has had some work done for 2016. To make it more appealing to the Chinese market, the wheelbase has been extended by 3.2 inches and the rear seat legroom gained 4 inches. And any time you can gain four inches, well I’ll just leave it at that.

The extended length is very well integrated into the exterior styling and really doesn’t jump out at you- it looks like it’s been there all along. The overall styling is upscale and tasteful, while avoiding the current “angry birds” edginess of some, and that suits me just fine. The design is only moderately revised from 2008 but doesn’t look outdated. The test car was finished in a very handsome shade of Midnight Garnet which I thought gave it an air of sophistication. 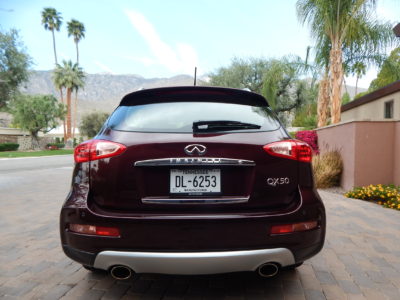 It’s been said that Infinitis are Nissans that shop at good stores, and sure enough the QX50 shines when you open the door. The luxurious cabin was finished in a handsome red brown leather than Infiniti calls Chestnut. Warm and inviting and well tailored all around, and a nice place to spend some time.

The test car arrived pretty well loaded. On top of the $35,445 base price, our QX50 was equipped with the $2,750 Technology Package (Distronic Cruise Control, Lane Departure and Blind Spot Monitors, Intelligent Brake Assist with Forward Collision Assist) and the $2,400 Deluxe Touring Package with 19” wheels, Xenon Headlamps, Adaptive Front Lighting, 8 way passenger seat, Power Driver’s Seat Lumbar, and Power Folding Second Row.) We also had the $500 Premium Package with Bose Audio, electronic climate control, dual memory seats, Homelink and other interior goodies) and the $2000 Premium Plus Package which added Navigation, a 7-inch color display and the Around-View Monitor with front and rear sonar, plus XM Traffic and Weather and streaming bluetooth audio. Throw in $500 bucks worth of lighted step plates and the result was $43,535 worth of shiny new QX50. 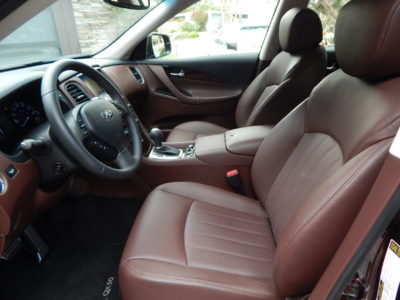 Infiniti likes their crossovers to drive like sport sedans, so no surprise that my overall driving impression was positive. The 3.7 V6 is one of my favorites — smooth and powerful — and does not disappoint. It’s well mated to the seven-speed automatic. The steering is very tight- in line with its Z-car heritage although requires a bit more effort than I’m used to, and the ride is much friendlier than the QX70. It steps off the line smartly when you step on it — indeed it’s not happy with light throttle pressure — it wants to go, so I obliged. The downside of that was the observed fuel economy which was around 16 mpg for mostly city driving.

The cabin is beautifully tailored with grained leathers, high quality soft vinyls, beautiful stitching and even embroidered floor mats. The electronics are top shelf, with Infiniti’s remarkable 360-degree parking assist camera including front and rear sonar- virtually the same as a Rolls-Royce. The best part is it can be manually activated for tight front view parking situations. 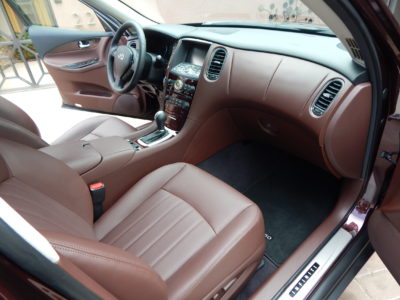 The nanny features are for the most part unobtrusive, although the collision monitor was somehow convinced that I was on a suicide mission. I could stand for it to be a bit less sensitive. The color monitor seemed a bit small by today’s standards, and I was surprised that it reflected in the windshield at night. Kudos for the really excellent headlamps and for the very user friendly navigation.

There are more choices in this segment than there are bottoms at the White Party, and while I’m not expecting the QX50 to suddenly jump to the top, it does offer a very luxurious cabin, top drawer electronics, a great drivetrain and very sporty handling. If the Infiniti retailers are offering deals you might want to check them out.