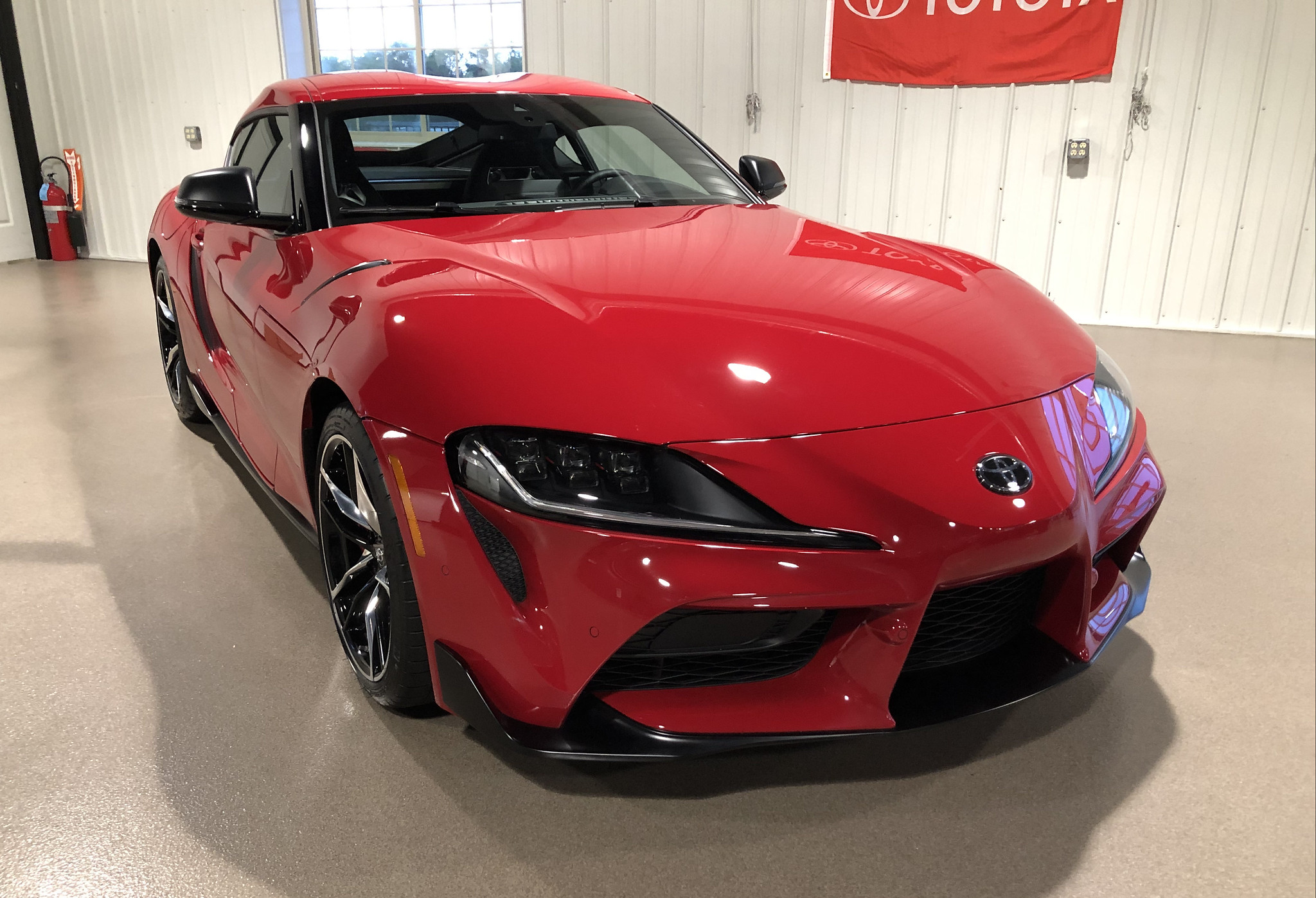 Our attendance at the Midwest Automotive Media Association’s Fall Rally this year had a specific mission in mind. A mission that would require some leaps of faith, including taking a track “novice” onto the Autobahn Country Club’s North Circuit to see whether the hype is real for one of the biggest stars of the 2020 model year.

The highly anticipated 2020 Toyota GR Supra – the nameplate’s fifth generation, also known as A90 – awaited its turn on the track. We had to drive it on what one could call a “Supra Day.”

This generation of Supra came from a collaboration of Toyota and BMW, assembled in Austria. From some angles, it looks like it’s all Toyota. Once inside and underneath the hood, there is clear evidence of BMW’s collaboration. The fusion works, yielding key elements in terms of driving dynamics and other optics to the Supra’s heritage.

But, one must take an overview of this car to know that this Magna Steyr-assembled collaborative effort is aimed at creating a sports coupe worthy of the name. The Supra also shares the same platform and assembly line as the newest BMW Z4 roadster. This is also the first Toyota sold in North America to wear the Gazoo Racing (GR) badge for public consumption.

Power comes from a 3.0-liter turbocharged in-line six-cylinder engine from BMW. The B58B30 engine is clearly not a 2JZ or any of Toyota’s superbly engineered motors. However, it provides a level of performance that picks up where the A80 Supra left off.

The engine puts out 335 horsepower and 365 pound-feet of torque – numbers that eclipse the 2JZ’s own benchmark. Power is sent to the rear wheels by the ZF 8HP 8-speed automatic transmission with paddle shifter engagement. The launch control on the GR Supra is standard across the lineup.

Our first impressions of the GR Supra were met with few surprises. We already figured that this car was going to be a powerful coupe with the prowess for the best roads the world has to offer.

First and foremost, the A90 GR Supra is a true road carver. It’s time on the track gave us that impression, as it worked its way around the North Circuit of Autobahn Country Club. The responsiveness of the chassis and steering set gave us the impression of how well it will handle through some tough twisty roads.

We did notice some lean through the corners, but it was in response to the way it was being pushed into the apexes and coming out of them. The transmission needs more engagement from the paddle shifters on the track. Otherwise, it can be indecisive when left alone. A good understanding of the track and shift points will make Supra respond to any driver on any road or track.

One cannot fault the choice of tires for the GR Supra. This car was engineered to run on Michelin Pilot Super Sport rubber – a summer performance tire made for maximum grip on dry and wet surfaces.

A drive mode adjustment would solve that quick, however, it was an indication that perhaps the GR Supra is much better driven on public roads than on the track. In that environment, this car would give us exactly what we want from it.

There are some practical points to make. One, the GR Supra is quite low, so taller drivers may have to find a way to get in and out of the car. Once they do, they are duly rewarded with supportive and comfortable seats.

One of the tricks Toyota employed to make tall drivers comfortable was the inclusion of some “domes” on the roof. These domes help in increasing headroom inside the cabin, something we saw in the last generation of the Dodge SRT Viper.

Also, note that there are only two seats in the A90 GR Supra. No longer is the Supra a 2+2 with limited room for anyone behind the driver and the passenger seat. It still has a hatchback to access the 10.2 cubic feet of cargo space.

A scan of the cabin will yield a mostly BMW arrangement. The steering wheel controls, infotainment screen, the shift-by-wire lever, and a version of the iDrive controller known as Supra Command should be familiar to anyone who owns a car with the Roundel badge. However, the instrumentation is all Toyota, customizable in a full TFT screen.

Perhaps the best indication of Toyota’s input into this sports coupe is the exterior design. The adaptation of the FT-1 concept onto this collaborative platform was pulled off magnificently. One can no longer question the badges on the car and the aerodynamic shapes it embodies for a unique and stand-alone coupe.

Pricing for the 2020 Toyota GR Supra starts at $49,990 for the 3.0 model. You can step up to the Premium, which offers various upgrades that make the Supra more desirable or jump to the Launch Edition. If you can find any of these at your local Toyota dealership, make sure it is not sold upon your arrival.

In all, the 2020 Toyota GR Supra is a sports car that is made for maximum excitement pleasure on the road. It may not be the dream Supra the fanboys (and girls) wanted, but it is truly aspirational for those who want a performance coupe without the luxury car price tag.

Driving one is always a Supra Day for you.