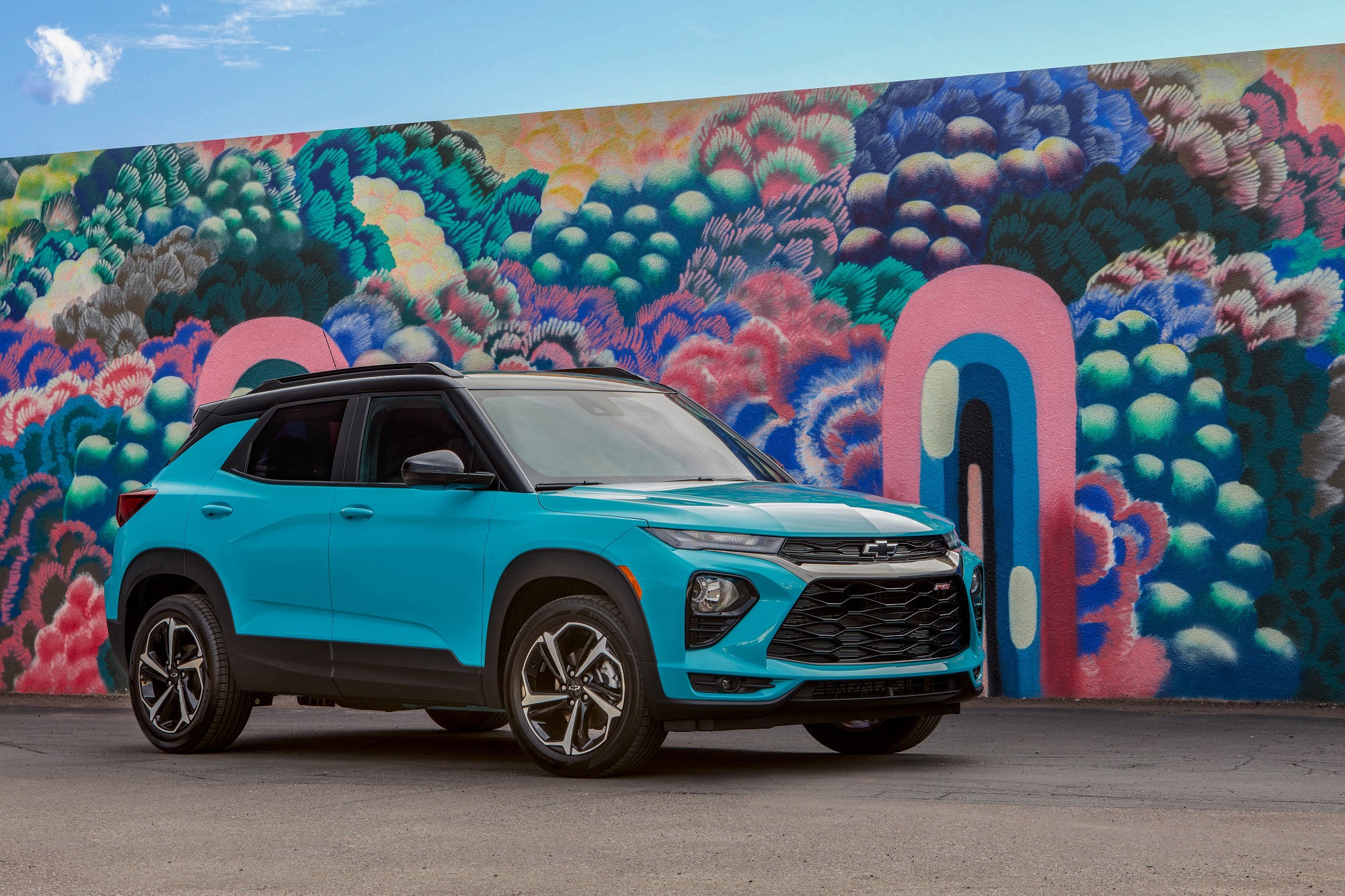 “I love the color of your car,” yells a guy in a mini-van on my way home from work.  “What color is that?” “Oasis Blue,” I reply.  “That is a cool car!”  I may need sunglasses to look it in the face, but the bright baby blue hue definitely expresses the 2021 Chevy Trailblazer’s sunny personality.  Especially in RS trim, it’s also fun to drive All of this has elevated the little crossover to one of GM’s best sellers.

While the Trailblazer is Chevy’s latest subcompact crossover, it shares styling cues with its bigger mid-size Blazer sibling.  Squinty driving lights over LED headlamps, black grille, and black chrome trim distinguish the front while a contrasting black roof and 18” wheels dominate the side view.  It’s as much Volvo XC40 as baby Chevy.  Around back, there’s faux carbon fiber, twin exhaust outlets, and chiseled taillamps.  Logos and lettering are rendered in black.  Lift the hatch to fill a roomy cargo compartment with fold-down seats.

As expected in a compact crossover, there’s a fair amount of hard plastic topping the dash and doors, but there’s also some surprising upscale details like a thick flat-bottom leather-wrapped steering wheel, padded dash inserts with red stitching, red accents around the air vents, and piano black trim ensconcing the touchscreen.  Cloth and neoprene seats are heated in front and should prove durable.  Single-zone automatic climate control, Bose audio, and power front seats with lumbar adjustment add comforts.  A sunroof would make it even better.

There’s plenty of power to get it all down the road, too.  Base Trailblazers have a 1.2-liter three-cylinder, but RS editions come stoked with a 1.3-liter turbocharged three-cylinder engine that delivers 155 horsepower and 174 lb.-ft. of torque.  Front-drive with a continuously variable transmission is standard, but our all-wheel-drive model shifts power through a 9-speed automatic transmission that’s so much more satisfying with actual cogs.  I could do without auto stop/start that pauses the engine at rest, but it contributes to 26/30-MPG city/highway.

There’s nothing complicated about the chassis, but it works well enough.  An independent front and compound crank rear suspension is typical of this class.  There’s a bit of clunking over rough pavement with the large wheels, but there’s nothing untoward and it is willing to play a little in the twisties.  Hit the Sport button to sharpen steering, throttle, and shift responses.  Just don’t expect any more horsepower, because what you have is all you get.  Fortunately, the torquey little engine tosses the Trailblazer down-road with relative enthusiasm.

If you’re going to get a Trailblazer RS, get one in a fun color like Oasis Blue.  It definitely fits its happy personality whether spinning the turbo on highways or slipping through tight city streets.  Chevrolet created a cool little crossover and is being rewarded for the effort.  Base models start at $19,995, but came to $30,580 in sporty RS trim with all the luxury and safety gear.  Competitors include the Subaru Crosstrek, Toyota CH-R, Ford EcoSport, Honda HR-V, Hyundai Kona, and similar Buick Encore GX.