Riding a Mustang hard and putting it away wet may be a sexy saddle, but it’s a little tight in the stall given two doors and a tight back seat.  And, don’t even think about taking your date away from smooth pavement.  If your idea of adventure stretches from to the gayborhood café to a sensual camping spot, the 2022 Ford Bronco Black Diamond edition is your wild beast of pleasure. 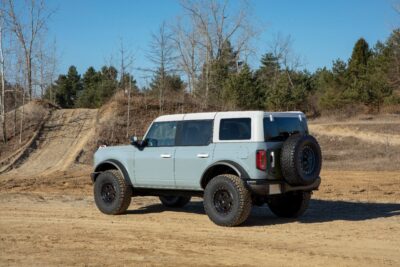 Let’s recall there are actually two Broncos and neither shares anything with Ford’s full-size pickups as did the O. J. Simpson-era models.  The Bronco Sport borrows architecture from the Escape and Maverick pickup, making it more of a hard-core crossover than all-trail beast.  The more fortified Bronco we have is based on the Ranger pickup’s rigid frame for more serious endeavors.  They’re both good, so pick your passion.

Styling recalls the original Bronco that debuted in 1966 with beaming round headlamps, wide flat hood, and grille with BRONCO stamped across.  Steel bumpers over tow hooks and tow loops on the fenders add play.  The brick-square body rides over black steel 17” wheels on our Black Diamond edition.  Rip off the entire hard top or just the front panels for a breeze.

When things got messy, you could hose out the original Bronco, and while the latest one is more sophisticated, it’s nearly as robust.  Sure, there’s plenty of hard plastic on the dash and doors, but it’s rendered in stylish contrasting colors and receives molded-in texture for brushes of class.  Rubber flooring accompanies an actual drain plug in the passenger side floor should things get filthy!

There’s plenty of technology, too.  Ford’s touchscreens are very intuitive with icons for audio, phone, and apps along the bottom.  There’s no navigation, but you can connect with Apple CarPlay and 4G Wi-Fi.  Drivers get a flatscreen instrument cluster with digital speedometer and bar graph tachometer for a touch of flash.  Stay safe with automatic emergency braking and a rear seat child reminder.

Under the rippling hood of our Bronco is the base 2.3-liter turbo-four delivering 270 horsepower and 310 lb.-ft. of torque to zip through traffic or hike up steep trails.  Fuel economy, as expected for a mobile brick, is just 17/19-MPG city/highway.  For more power, choose the optional 2.7-liter turbocharged V6 that ups output to 310 horsepower and 400 lb.-ft. of torque.  Fuel economy is disgusting.

It’s rare to find a stick today, but the Bronco is available with a seven-speed manual that includes six forward gears plus one crawl gear for hard-core off-roading.  It’s easy to shift, even in busy morning traffic.  A knob in the console directs the truck’s G.O.A.T. modes (Goes Over Almost any Terrain) that configure the powertrain for all conditions. 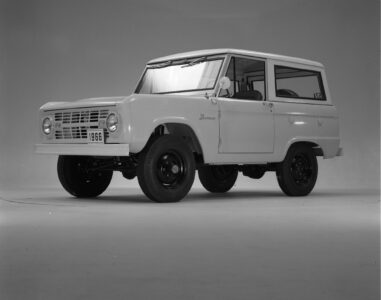 Jeep Wrangler drivers would lose themselves over the Bronco’s composure on rough city streets, fast freeways, and rugged lanes.  Unlike the bounding Jeep, Bronco employs an independent front suspension for handling that’s more crossover than tractor.  Heavy-duty dampers squash untoward behavior in the rear.  I’d gladly load up those I call family and drive cross-country.

The Ford Bronco proves a hard romp mustn’t leave you raw as the tough rider is surprisingly refined.  Fuel economy is horrendous, but the rest of is severely charming.  In fact, the hardest part about owning a Bronco may be getting one as they’re in pretty short supply.  Base two-door models start at $28,500, but ours came to $42,720.