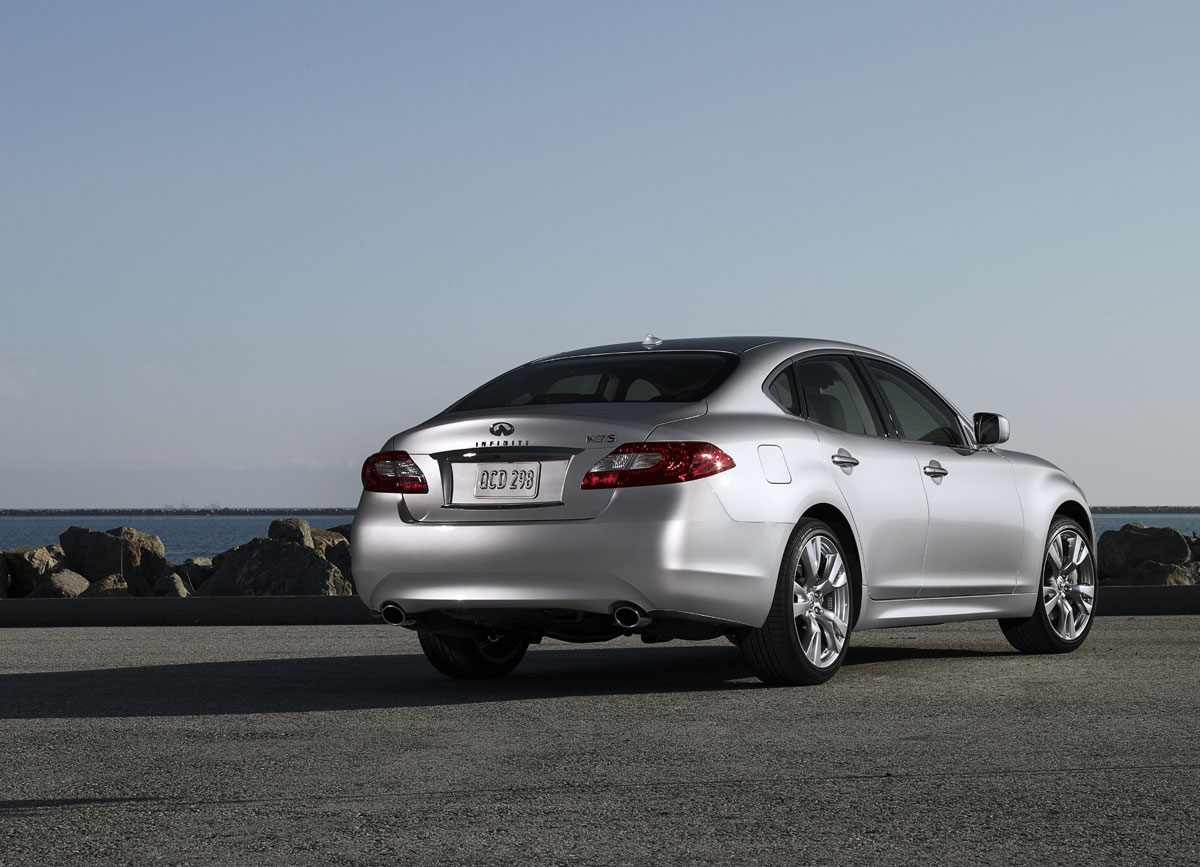 Still making its rounds at auto shows, the Infiniti Essence concept car defines the brand’s design language for the next generation. Looking like a Japanese Jaguar, the car’s flowing lines, chrome window detailing, and concave side panel sculpting have become the essence of Infiniti, and no current model wears this suit better than the M37x.

The M37x’s exterior style embraces the new four-door sports car ethos with a long sloping nose, arched roof line, high windowsills, and a fastback look. Shoulder lines drape over 18″ alloy wheels as they flow from the hood to rear deck, and body surfacing on the front fenders and doors is especially nice. Up front, Infiniti’s big chrome grille and curve-following headlamps project the car’s authority while elegant wrap-around taillamps give another nod to Jaguar. From many angles, the M37 looks like a four-door XK. Whatever you think of the design, the M is much more adventurous than the previous two generations’ boring Euro sedan profiles.

The interior embraces the same two-tier control stack established by the last generation Q45 and adopted by the rest of the Infiniti line-up. At first glance, the hodgepodge of buttons and knobs seems a bit overwhelming, but given enough time, the grouping quickly becomes second nature.. While many in the media have compared the buttons to piano keys, the designers actual intent was to keep all major functions within eight-inches of the driver, a logical idea. Rounding out the M37x’s interior motif are swooping dash and door contours with stitched coverings and real silver-coated woodgrain trim. The cabin immerses passengers in heated and cooling leather seats and multi-zone climate control, while the driver is treated to a heated leather-wrapped steering wheel, power tilt/telescoping steering column, Bluetooth phone connectivity, and Infiniti’s traditional analog clock. Besides a Bose two-channel, 10-speaker audio system to please the ears (I love the baby Bose speakers built into the front seats), music can be played from any mobile device connected through a USB port or by Bluetooth streaming. Infiniti’s Active Noise Control keeps the cabin near absent of unwanted sounds.

In the area of occupant protection and accident avoidance, Infiniti has equipped the M37x with one of the world’s most sophisticated suites of electronic safety measures. Four-wheel anti-lock disc brakes, vehicle stability control, traction control, and side curtain airbags are all on-board, but it’s the dizzying array of electronic sensors that transform the M37x into a miniature mother-in-law. The Intelligent Cruise Control automatically slows down for traffic, while the Blind Spot Warning blips an orange light near the mirror to alert drivers to unseen vehicles,. The Blind Spot Intervention system can automatically apply brakes to nudge the sedan away from danger, the Lane Departure Warning system generates resistance in the steering feel while encouraging the car back into its lane, and Forward Collision Warning alerts the driver when he or she is approaching a vehicle in front too quickly. When the sensors detect scenarios that could lead to imminent collision, they will pre-tighten the seatbelts (apparently, this works when you put the brakes into full-ABS on slick roads). Before long, we’ll have probes in our brains so the car can react when we even think about doing something stupid (like turning down the volume on a really good Lady Ga-Ga song.)

Unlike the complex labyrinth that makes up the M37x’s safety features, the car’s powertrain choices are easy to understand. You can get an M with a 420-horsepower 5.6-litre V8, but I think most people will be more than content with the 330-horsepower provided by the base 3.7-litre V6 engine. Even at speeds that will earn quality time with local constables, the M37x is not deterred from galloping away with gusto. The seven-speed automatic transmission with manual shift mode works crisply to deliver up to 50-percent of power to the front wheels. Driving more responsibly, an Eco mode (gifted from the Nissan Leaf) reduces accelerator sensitivity to save fuel. Still, 17/24-MPG city/hwy. is good for a car like the M37x.

The M37x is one of those rare vehicles that is enjoyable in all driving situations. It is nimble enough to enjoy corners, but lounges comfortably when high-rolling it down the Interstate. I found the steering and suspension to be a good balance between sport and luxury. If you want a pure sport sedan, buy the G37 – it is based on the same vehicle architecture as the M37x, but rides on a shorter wheelbase. The M37x’s main job is to fill in for the Q45 while keeping the Mercedes E-Class, BMW 5-Series, Lexus GS, and Jaguar XF in check.

Infiniti got off to a slow start in 1989, giving Lexus a wide lane to make a name for luxury and renowned build quality. While Lexus touted excellence, Infiniti ads talked about trees and rocks. It didn’t work. Fast forward to 2010 and vehicles like the G Sedan and Coupe, the FX Sport Crossover and even the mammoth QX56 prove Infiniti has finally found its footing. There is a lot of style and performance in the M37x. If the car is indeed the essence of Infiniti, then the Japanese automaker is flying with beautiful curves.