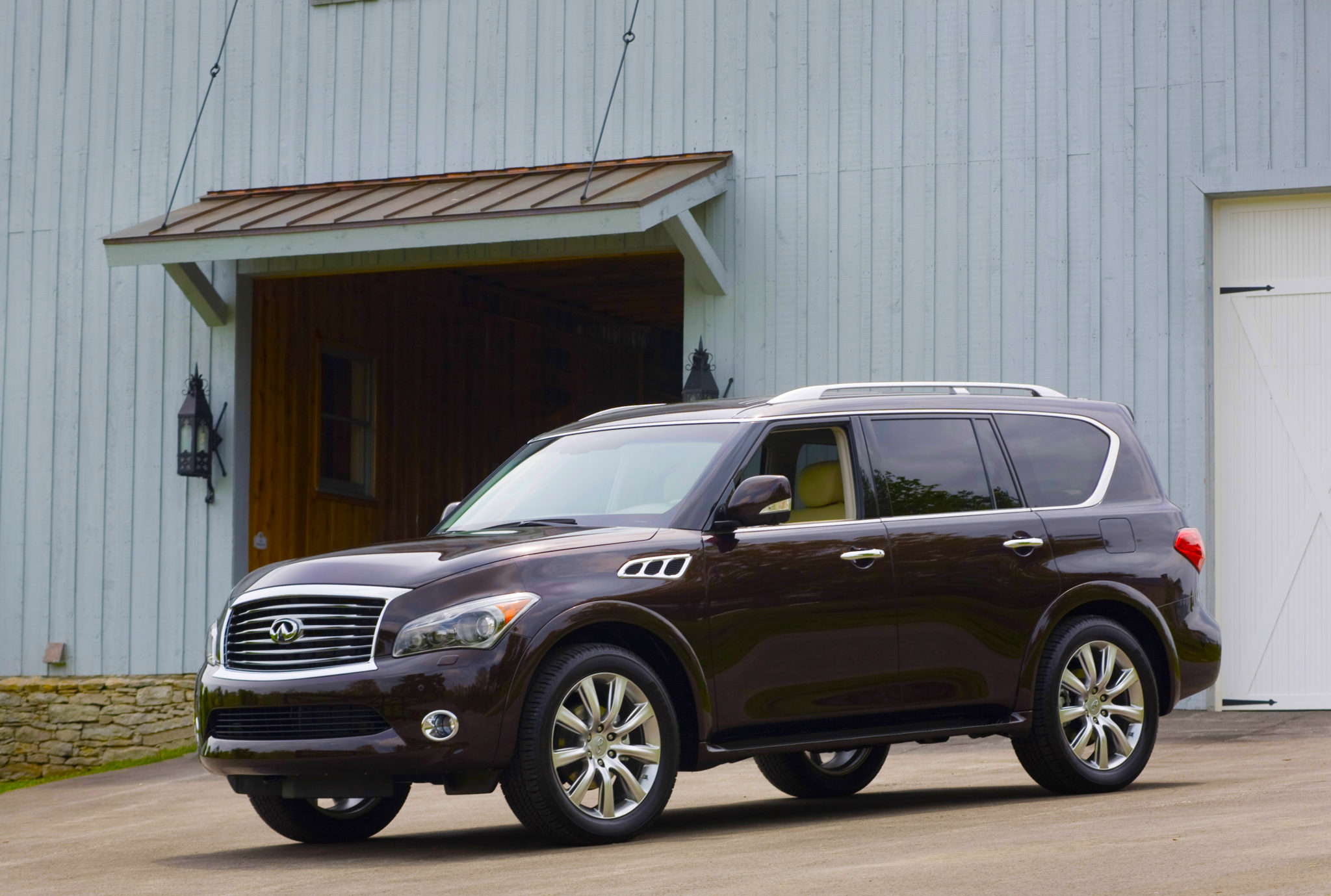 Journalists often refer to high-performance luxury sedans that do everything perfectly as “Q-Ships”. The original Lexus Q-ship was literally a Q-ship, branded Q45. When it debuted in 1989, it was the equal of German bismarks costing twice as much. Fast, comfortable, well-appointed, and over-engineered, the car was fantastic. Since its discontinuation several years ago, Infiniti exclusively used Q on its SUVs. Gi-normous or not, the re-designed QX56 SUV carries itself well as Infiniti’s top transporter.

Infiniti tried familiar waters with the first two SUVs it set loose in America. The Pathfinder-based QX4 was well-appointed with serious off-road credentials, but failed to convince anybody it was little more than a nice Pathfinder. Infiniti went jumbo with the first-generation QX56, which was based on the Mississippi-built Nissan Armada (Has a better name for a people-ferrying cruiser ever been devised?) An excellent vehicle with pleasant road manners, outstanding luxury, and memorable design, the QX56 trailed competitors. The second generation QX56, built in Japan, defines Q-Ship differently.

Bigger by inches all around, the new QX does a much better job of shaping its heft behind a curvaceous body that adopts Infiniti’s latest trend towards Japanese elegance. Compared to the previous bulldozer, this one looks as if salt water and sand washed over it in a tumble cycle. An elegant chrome grille with plate-size Infiniti logo is sided by xenon headlamps that swivel around curves. LED taillights, heated side mirrors that flip down for backing, body color running boards, roof rails, and 22″ alloy wheels are both functional and beautiful. The old Conestoga roofline is toppled and replaced by graceful lines and a chrome upturn at the C-Pillar. Vents on the front fenders apparently signify the power within.

Fortunately, the QX56 is up to the challenge of moving them around. The engine bay is spacious enough to harbor a couple of industrial turbines, but the SUV goes smoothly with its 32-valve DOHC 5.6-litre V8 that generates 400 horsepower and 413 lb.-ft. of torque – routed to all four wheels through a seven-speed automatic transmission. That’s enough to tow up to 8,500 lbs. of mini-yacht, horses, or better yet, a couple of classic cars. Unloaded, fuel economy is rated 14/20-MPG city/hwy. – respectable for a vessel this size.

Acting like giant stabilizers on another high-tech Q-Ship, the Queen Mary 2, a new Hydraulic Body Motion Control system reduces body lean while cornering and keeps the vehicle level in all circumstances. Each shock absorber has a hydraulic chamber that is cross-piped with the other cylinders, allowing the vehicle to adjust suspension travel on each wheel independently.  A rear leveling system compensates for trailers and cargo loads. Working with the standard four-wheel independent suspension, HBMC provides a luxury car ride without wallowing down the highway.

The wagon’s four-wheel-drive system is equally impressive. Controlled by a large metal knob in the center console, the system features Auto, 4H, and 4L modes. Up to 50% of the power can go to the front wheels. The powertrain can be dialed for Snow and Tow modes. Four-wheel anti-lock disc brakes, stability control, Electronic Brake force Distribution (maintains stability while braking), and Hill Start Assist (holds the vehicle momentarily while lifting from brake to throttle) provide an extra margin of safety as do lane departure, blind spot, and front collision warnings. Adaptive cruise control is great for keeping a safe distance, but I could do without the proximity sensors that are perceptive enough to detect a Vulcan starship from three centuries away.

A journalist calling any vehicle a Q-Ship is high praise. Infiniti finally found a unique style that is true to its Japanese heritage. Sybaric luxury, substantial power, delightful road manners, and a full suite of the latest technology make the QX56 a great vessel. An as-tested price of $72,560 is in line with competitors from Germany, America, and Japan.