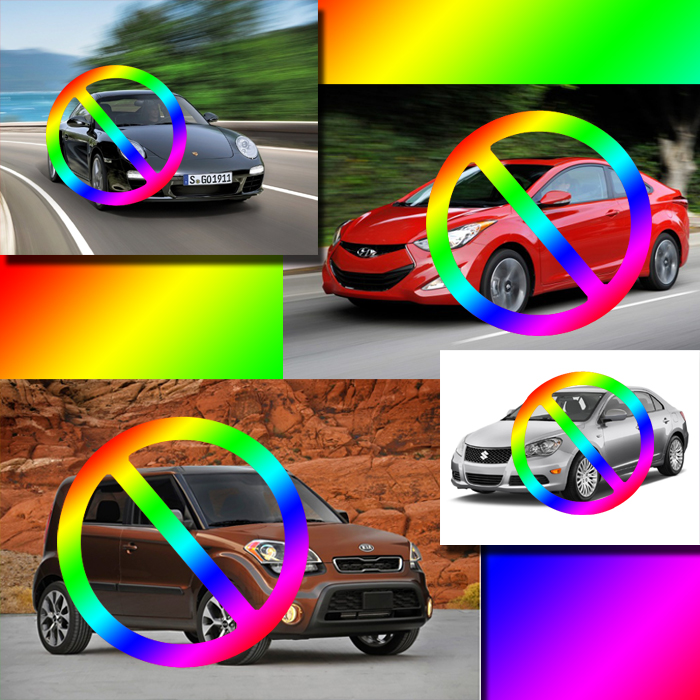 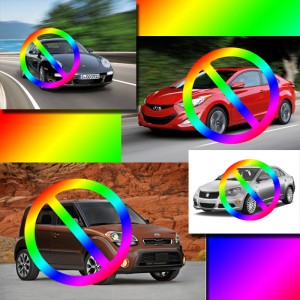 Hyundai, Kia, Porsche, and Suzuki offer no protections or benefits for their LGBT employees.

There are two ways of looking at that.

On the one hand, you could say that of the 37 car companies Gaywheels has surveyed, a whopping 33 are gay-friendly (at least to some degree). Considering that most of those automakers have added pro-LGBT policies within the past decade, that’s swift progress. Only four lagging behind? Not so shabby.

On the other hand, you could also say that in this day and age — when every single firm on Fortune’s list of Best Companies to Work For has a non-discrimination policy to protect its LGBT employees — it is appalling that any automaker remains so clueless.

We can appreciate both arguments, depending on our mood and caffeine levels.

In an effort to keep Gaywheels’ list of gay-friendly automakers up to date, we’ve contacted Hyundai, Kia, Porsche, and Suzuki to see what steps — if any — they’re taking to make their companies more LGBT-friendly. During the 2012 Detroit Auto Show, we even followed up with three of those companies in person. Here’s what we learned.

HYUNDAI/KIA: Still not gay-friendly
We’ve reached out to Hyundai/Kia on several occasions, asking for updates on their LGBT employment policies. To date, our calls and emails have been ignored. In Detroit, on our first visit to the Hyundai/Kia booth, we were told that no one on-site could respond to our queries, but if we stopped by later in the day, they’d have some answers. We did. They didn’t.

Hyundai’s website isn’t any more helpful or encouraging. Under “diversity“, the company says one of its goals is “To hire and retain an executive management and employee staff based on equal participation and opportunity for all, regardless of race, gender, age, national origin, religion, or any other legally protected characteristic [emphasis ours].” Sigh.

That said, we would be very, very surprised if Hyundai/Kia didn’t get on the LGBT equality train very, very quickly. The sisters from South Korea are working overtime to grow market share in the U.S., and if they want to do that, they’re going to need to maintain a workforce that is as diverse and creative as the ones managed by competitors like Toyota, Honda, and Detroit’s Big Three.  Hyundai/Kia won’t add LGBT-protections because it’s “the right thing to do”; they’ll do it because they need the talent of LGBT employees and the bucks of LGBT customers.

PORSCHE: Still not gay-friendly
When we stopped by the Porsche booth at the Detroit Auto Show, the front desk attendants were all smiles. “Is there someone we could talk to about Porsche’s policies toward its LGBT employees?” we asked. One happily went off in search of an appropriate staffer.

The PR rep who came out to meet us, however, was definitely not eager to chat. In a nutshell, her response was a curt, “We don’t comment on internal policies” — a response she repeated several times. She was kind of like the bouncer at a nightclub telling an intoxicated patron, “I’m sorry, sir, but I’m going to have to ask you to leave.”

We left all right, and much like that drunk, we were not happy about it.

After we’d calmed down a bit, we tried to give the rep the benefit of the doubt. The auto show is a hectic place, after all — maybe she’d just had a bad day. We followed up with her a couple of weeks ago to see if she’d be willing to elaborate. Not surprisingly, we were ignored.

But despite her reluctance to comment on personnel policies, our PR rep and the rest of the Porsche team will likely be dragged kicking and screaming into the era of LGBT equality — and soon. There’s no question that Porsche suffers from a bad case of elitism, but that’s the very attitude that got Porsche in trouble when it recently tried to take over sister company, Volkswagen. Now that VW is running the show, rumor has it that Porsche has begun a slow process of adding LGBT protections, bringing it in line with VW, which landed an impressive score on HRC’s 2012 Corporate Equality Index.

Want to make your voice heard? Porsche has practically no contact information on its website, but you could try reaching out to Nick Twork, Product Communications Manager, at nick.twork@porsche.us or 678-323-6975. (He’s not the right person to hear your grievances, but he’s listed on recent press releases. Better than nothing.) We’d give you the email address of the PR rep we spoke to in Detroit, but that would probably be an exercise in futility. And frustration.

SUZUKI: Still not gay-friendly
As with Hyundai/Kia and Porsche, our queries to Suzuki have gone unanswered, and the company was a no-show in Detroit. Short of sending a letter by registered mail, we don’t know what else to do.

But whatever. Rumor has it that Suzuki isn’t long for the Western World anyway. The Kizashi helped improve the brand’s standing a bit, but it’s has its share of critics, too. (We’d add that if you’re trying to draw attention to your car company with a halo model, betting the farm on a mid-size sedan may not be the way to go.) We wouldn’t be surprised if Suzuki packed up its toys and went home in a couple of years.

Want to make your voice heard? Given the lack of email addresses on Suzuki contact page, we’re guessing the company doesn’t like to communicate that way. (Which might explain why our emails have gone unanswered.) If you feel passionately about Suzuki and want to see it stick around, try calling 800-934-0934.

But what if you love the Hyundai Santa Fe? What if you can’t live without a Porsche 911? Next week, we’ll talk more about these four not-so-gay-friendly brands and what to do if you’re bound and determined to buy a car from one of them.

5 thoughts on “Why Don’t Hyundai, Kia, Porsche, And Suzuki Value Their LGBT Employees?”