I’d flown to Detroit to experience the Woodward Dream Cruise, an enormous, cult-ish meeting of extremely enthusiastic vintage car owners and their rides that takes place for two days each summer on the first paved road in America. I saw someone driving around with two skeletons in the backseat of their late-80s Oldsmobile Cutlass Convertible. It’s all a bit strange.

My blasé attitude toward the Dream Cruise can be attributed to one thing. I’d made the mistake of visiting the GM Heritage Center first.

The folks at GM were kind enough to grant me access to this hallowed site located in a completely unassuming warehouse in the middle-of-nowhere Michigan. It looks as if they could be selling discount copy machines out the side door or something. But oh my how looks can be deceiving.

This modest exterior completely belies the delicious treasures that lay within. One step through the front door and I was instantly transformed into a mumbling superlative-spewing Gollum, rushing about with sweaty palms and darting eyes. There before me lay a pristine, sparkling collection of cars I honestly never believed I would ever see up-close. Also let me clarify, when I say cars I actually mean priceless concepts and prototype vehicles. It’s like the auto enthusiast’s equivalent of the treasure room on the Pirates of the Caribbean ride at Disneyland — only all this treasure is real. Gimme.

Ay dios mio. If I had to choose one car in the entire collection to try to steal it would have to be the 1959 Cadillac Cyclone Concept. That’s hypothetically speaking, of course, said the writer to GM’s legal team, who I’m sure will read this at some point.

The Cyclone Concept has had a bit of a trans experience. It began life as a pale yellow car with high tail fins. In an unusual twist, its famous designer, Harley Earl, had the car refinished a few years after its debut, bathed in a steely silver with the fins chopped way down. The result is absolutely breathtaking, with the short demure fins accentuating the sleek, bullet-like body. It’s a nip-tuck done right. An automotive Jocelyn Wildenstein it is not.

Why make it my #1? This car summarizes all that I find sexy about mid-century car design and is quintessentially Cadillac. It’s bold and beautiful but also dignified and not brash in any way. It’s also futuristic but not in an over-the-top freaky way. In other words, how every Cadillac should be.

Quick history lesson: Harley Earl was basically the Steve Jobs of his time. Completely innovation driven, this man pretty much created the automotive design department, being so badass that he often drove the concept cars he and his team created as his daily drivers, the first being the Buick Y-Job (which coincidentally was also the first concept car ever). 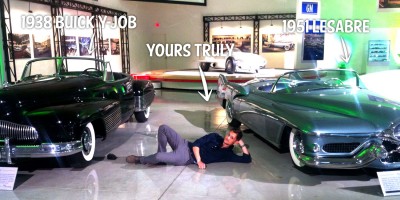 In 1951 Earl penned the LeSabre you see here and set the design direction for the entire industry for the next decade. It looks giant and imposing in photos but up close it’s actually quite small and very low. Chalk that up to the power of dramatic styling. The LeSabre even sports a moisture sensitive bit of metal in between the seats. If Harley ever left the top down and a rain storm showed up unexpectedly, the moisture sensitive plate would tell the LeSabre to raise the roof automatically. Wiz, bang.

At right is a photo of me laying in between the Y-Job and the LeSabre. I am doing this simply because I could. I’ve never felt more badass in all my life.

3. 1985 Cadillac Cimarron Dual-Cowl (the concept of your nightmares)

99.95% of everything from the 1980s was bad. I’m pretty sure that can be scientifically proven. It’s as if “cheap and ugly” were enforced by the United Nations or something. So if you weren’t Burt Reynolds or a shoulder pad manufacturer, you probably had a pretty bad 80s. GM had a particularly bad 80s with broken-down design and well, just about broken-down everything.

The Cadillac Cimarron became the poster child of just how low GM had sunk by the mid 1980s. Introduced in 1982, it was little more than a gussied up Chevy Cavalier with an enormous price hike. A direct slap in the face to the consumer.

I knew nothing about the 1985 Cadillac Cimarron Dual-Cowl convertible concept before my trip the the Heritage Center. It called to me from across the floor, a bizarre tan and maroon bar of soap on wheels. The interior was replete with everything you’d need in the 80s: CRT touch-control monitors, car phones, and confusing ergonomics. The only thing that could have possibly made it better would have been a fax machine built into the center console. I suppose the biggest surprise was that the word “Cimarron” wasn’t taped over on this car, as it’s such a sore spot for GM. It’s stunningly horrid in person, but I loved it for being so odd and unnecessary. Everyone needs a rock-bottom. Cadillac, here is yours.

The 1966 Electrovair was basically an electrified 1966 Chevy Corvair (the standard internal combustion version being a controversial and progressive car in its time). It’s awesome to know that GM was thinking about electrification even at a time when gasoline was as free-flowing as hypocrisy from a Chick-Fil-A executive’s mouth. The batteries on display look like something that could just explode at any time. I’m sure that’s not the case but old battery technology just kinda freaks me out. It all looks so dangerous. Seriously, Wikipedia it (or just look it up on the GM Heritage Center website). Creepy huh?

The one that got away: 2004 Chevy Nomad Concept

I wanted so badly for Chevy to build the Nomad. It was sporty and utilitarian, perhaps the perfect bachelor’s car. I can understand why they didn’t build it — most people I’ve shown it to recoiled with hatred and confusion — but being an only child I still think they should have built one just for me because my mom says I’m special.

A bit of a side attraction was the working guts of one of GM’s Futureliners. The Futureliners traveled the US as part of a show called “Parade of Progress” that basically delivered the message of how wondrous GM was right to people’s hometowns in wild spaceship-looking buses. The display at the Heritage Center is the only surviving example of the inner-workings of one of these machines and has been faithfully restored to its original, working condition.

The whole Futureliner show is accompanied by a slightly morbid narration of a small family living in a town transformed by advancements in transportation. Apparently everyone was still a little “womp-womp” from the Great Depression in the early 1940s. Poor Betsy.

I filmed the whole thing because I’ve always had a bit of a diorama fetish. I’m sure that, as a child, witnessing this would have reduced me to a pile of tears, “teenage girl at an Elvis concert” style. I will admit I still got a bit misty watching it as an “adult”.

Just for fun, I’ve embedded it at the bottom of the post.

Then they told me I had to leave…

Let me just tell you, I shut that place down. I stayed there until they had to turn off the lights to get me to leave, and even then I had to be escorted to the door where it was firmly locked behind me.

So what did I learn from the Heritage Center? I learned that GM has an amazing past that should be cherished — not just as a collection of amazing vehicles but as a tribute to the truly innovative spirit the company was founded on. They really were the Apple, Inc. of mid-century America. Somewhere along the line they lost sight of this and veered away from their foundations as a progressive technology and design powerhouse.

It’s been a hard road back to the top but I can tell you, the people I met and the things I saw gave me faith that the new GM is a lithe and innovative company. Judging from things like the recent Cadillac Ciel concept, they’re committed to delivering on the ethos of “unapologetically awesome” once again.

I strolled from the Heritage Center a bit deflated. Having just tasted the automotive equivalent of fine sirloin steak, I found that I simply no longer had the stomach for the greasy hamburger cars being shown out on Woodward Avenue. Dear Great Things, why must you make everyday things seem so trivial?

You can learn more about the GM Heritage Center by visiting GMHeritageCenter.com

3 thoughts on “General Motors Heritage Center: The Museum That Almost Made My Head Explode”