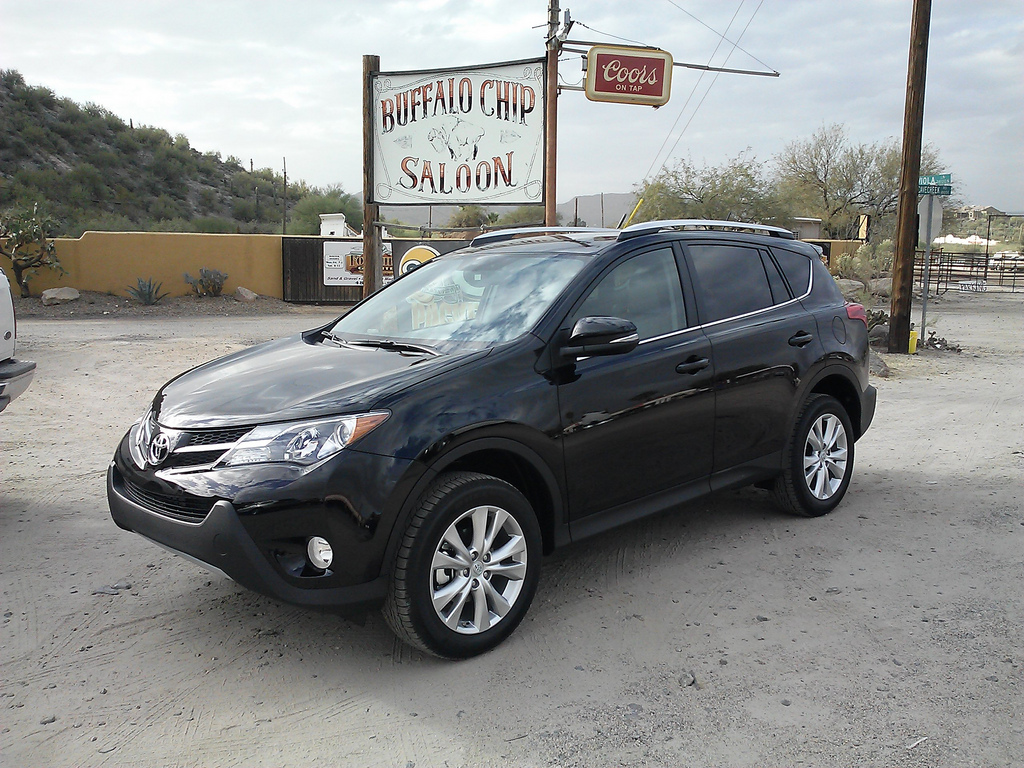 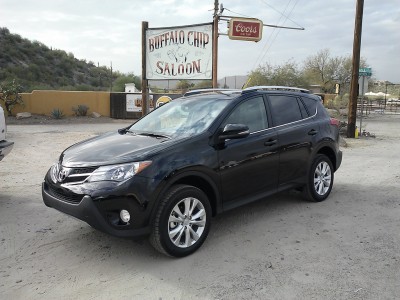 The restyled fourth-generation Toyota RAV4 will begin arriving on our shores at the end of this month. The RAV4, which is credited with creating the compact crossover segment, returns with a totally restyled exterior and interior, as well as a new six-speed transmission and other refinements to a largely carried-over platform.

The overall dimensions of the 2013 RAV4 are very similar to its predecessor — same wheelbase, total length down two inches, overall height down about an inch and width reduced by .04 of an inch. However, the three-row version is gone, and the new generation is offered only as a five passenger vehicle in three trim levels: LE, XLE, and Limited. Both FWD and All Wheel Drive versions are offered.

The RAV4’s exterior has been totally restyled and is generally consistent with the look of current Toyota passenger car offerings. The front end is much more aerodynamic and also more carlike than its predecessor: the RAV4 may have started the Tonka Truck club, but it’s now much more Camry than Tundra. This means upright truck grilles and high hood lines have given way to curves and improved aerodynamics. The look is pleasing and sophisticated, and far less truck-inspired than before. 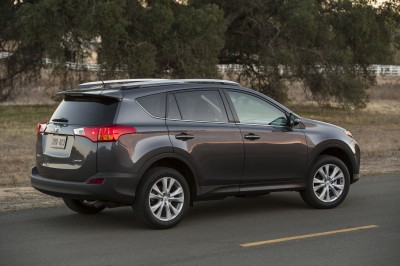 The biggest change on the exterior comes in the rear, where the cargo door has given way to a top-hinged rear liftgate, and the iconic outside-mounted spare has disappeared beneath the rear cargo floor. Score one for focus groups, but the result is a less distinctive design and diminished brand continuity: from the back it could be a Kia or an Audi. That aspect aside, the overall effect of the styling is contemporary and pleasant. It’s a handsome member of a crowded class, though not a standout.

Seventeen inch steel wheels are standard on the new RAV4, the XLE gets 17-inch alloys, and the Limited rolls on twin-spoke 18-inch alloys. A great deal of attention has been paid to airflow, including tailored corners, smooth-edged fascias, and even restyled front fender liners that maximize efficiency. The overall drag coefficient has been lowered from .334 to .329, which makes the RAV4 quieter as well as more fuel efficient. 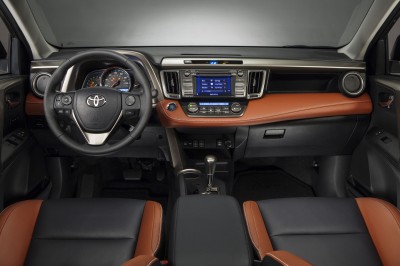 But for all that, the real drama is on the inside, where the changes are impressive. The RAV4’s entire interior has been redesigned and taken upscale: the instrument panel has a baby Lexus feel, the materials are all soft to the touch, the sharpness of the steering column angle has been reduced, and the overall effect is very carlike.

The seats themselves are redesigned with a slim front seatback that improves rear knee room, and the rearward adjustment has been increased by .8 inches. LE and XLE models have cloth trim, but the Limited stands out here with hide-like SofTex trim and a two-toning pattern they call “Color Block”, which introduces an accent color to the seats, dash, and door panels. The effect ranges from subtle to outstanding: the Terra Cotta scheme is an attention-getter, the beige and gray much more subtle, and there is still a monochromatic black for those allergic to fashion. French stitching on the seats and instrument panels are also included on the XLE and Limited models, as well as a power moonroof.

The redesigned dash continues with Toyota’s current theme of spreading out in a horizontal fashion and raising the display screen as high as possible. Speaking of the screen, it’s a 6.1 inch color display with backup camera, HVAC, and audio integrated, and it comes standard on all models. The XLE and Limited offer optional integrated Navigation with Sirius/XM radio, HD Radio with iTunes tagging, advanced voice recognition and Text to speech capabilities, as well as Toyota’s Entune multimedia system with Bing, iHeart radio,and Pandora. Advanced JBL audio is also available on the Limited.

Safety has been given attention too, with eight standard airbags consisting of driver and front passenger, driver’s knee and passenger seat cushion, front seat side-mounted, and side-curtain airbags for front and rear passengers. If you’re getting the impression that a whole lot of attention has been paid to the look and feel of the interior, then you get it. With the recent influx of redesigned compact crossovers on the market, Toyota decided to step up its interior game. 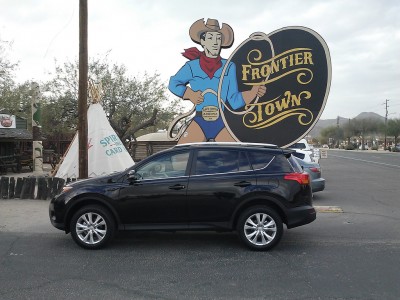 As mentioned above, the RAV4’s basic platform has been retained, with a few changes made. The V6 offering was dropped, leaving the 2.5-liter four-cylinder engine as the sole power plant. It develops 176 HP and 172 ft-lbs of torque, and is mated to a new six-speed automatic transmission with three drive modes — Standard, Sport, and ECO — and a “Flex-Start” locking Torque Converter.

The result of these changes is improved fuel economy. The FWD is rated at 24 mpg city/ 31 mpg highway / 26 combined, while the AWD is rated at 22/29/25, or only one mile per gallon less than the FWD. That’s a two mpg improvement for the FWD and one mpg better as an AWD. With the V6 gone, and no talk of hybrid or diesel power, it looks like Toyota’s game plan is to extract the maximum efficiency from the RAV4’s 2.5-liter four and not try and address every niche in the marketplace.

One chassis statistic worth noting is ground clearance, which is now 6.2 inches, down 1.2 inches from last year. Again we see how much more carlike the RAV4 has become.

There are no surprises when you turn the key. The RAV4 is smooth, comfortable, and above all, carlike. There are no rough edges remaining. The engine is Toyota-smooth, of course, and adequately powerful. The six-speed automatic is most entertaining in Sport mode, and there are genuine differences in its behavior when ECO is selected. The seats are supportive and comfortable, the handling is predicable, and the ride is smooth. It would be an excellent choice for a cross country adventure. I did have the opportunity to take the AWD offroad briefly, and it seemed competent, but bear in mind we were in Scottsdale, not Moab, and this little cruiser is more suited for climbing the Beverly Hills.

It’s pretty evident under hard acceleration that the RAV4 is a four-cylinder vehicle, and in those moments you’ll click your heels together and wish for a turbo variant, but otherwise it’s quite smooth and effortless. The steering is noteworthy because although I generally hate electronic power steering, the engineers at Toyota have managed to increase feedback into the system (remember when we used to call it road feel?) and the result is an electronic system that isn’t a trip down Novocaine Lane.

In sum: the car that created the compact crossover craze has finally crossed over. Think of it as a tall, fuel efficient car that will haul all of the drag bags you can throw at it. Its strongest suits are a luxuriously appointed interior and Toyota reliability. Priced from $24,145 for the base LE to $29,255 for an AWD Limited, it should give the new kids on the block a run for their money.