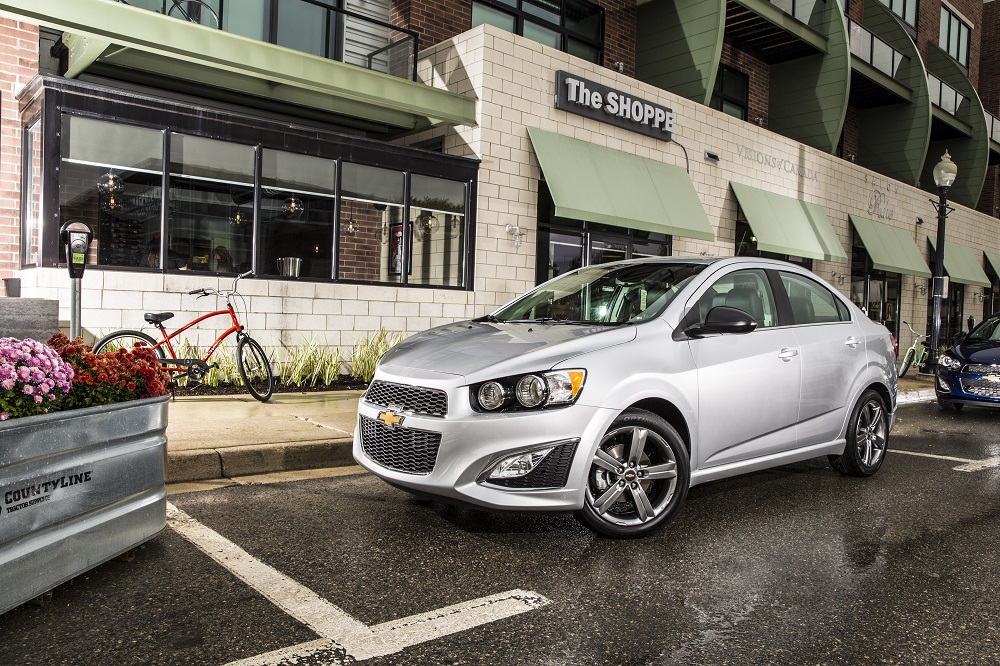 With the Sonic, Chevrolet went from worst to first in the sub-compact segment.  Finally, after decades of trying, a small car with big bowtie badges was leading the pack instead of being embarrassed by it.  Through the first half of the year, only the Honda Fit outsold Sonic.  It’s roomy, well-built, and expressively styled.  Get the RS sedan and you’ll have a little barnstormer with a price that won’t bust your bloomers. 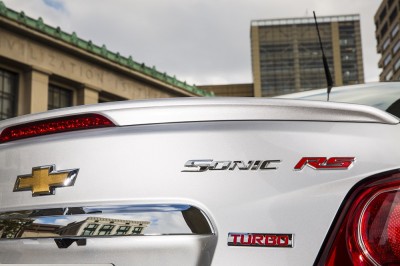 I prefer the available five-door hatchback’s utility, but there’s no mocking the Sonic sedan’s style for its high arching roof, planted stance, and aggressive cross-bar grille opening flanked by large round headlamps.  Deeply-stamped sidelines give the side profile a sporty character with neatly-sculpted curves around the front wheel openings adding grace.  It only looks better with the RS package’s specific grille, lowered ground affects, rear spoiler, and chrome exhaust.  Let it glow white hot.

Open the big doors to peer in at the same African mask-inspired dash design as lesser Sonics, but a glassier piano black and touchscreen theme with stylized instrument graphics step it up.  A sporty attitude is fortified with deeply-bolstered heated leather and suede sport seats, aluminum pedals, and red stitching on the shift knob. Grip the thick square-bottomed leather-wrapped steering wheel and comfortably-sculpted shift knob to get busy. I’m a big fan of the motorcycle-inspired instrument cluster with digital speedometer. 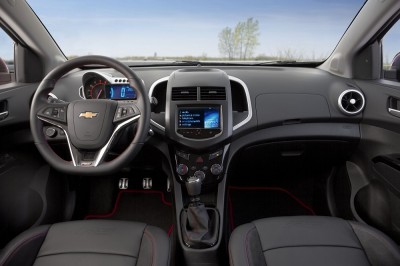 Check all the technology. Chevy MyLink utilizes easily-linked smartphones to access music libraries and apps for Pandora, Stitcher, TuneIn global radio, and BringGo navigation.  Our car also includes a back-up camera, forward collision alert, and lane departure warning systems.  For 2015, Sonic will even be available with a 4G LTE Wi-Fi hotspot.  About the only thing our car didn’t have was a CD player.  Who needs it?

Base Sonics are powerful enough for city duty, but not for stretching out on hilly backroads.  For that, the RS corrals Sonic’s optional 1.4-liter turbo-four rated the same 138 horsepower, but with torque increased to 148 lb.-ft.  The extra grunt digs deeper to keep a good head of steam underfoot.  God save the manuals because rowing the smooth six-speed is very nice (a six-speed automatic is available if you’re that boring).  Fuel economy rates 27/34 mpg city/hwy. 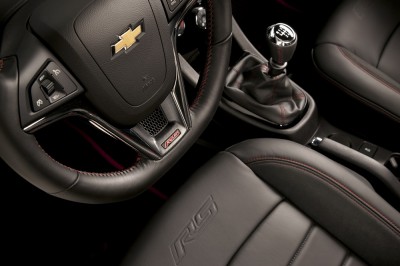 A peppy engine is the start and end if a car doesn’t have the chassis to sing accompaniment.  Sonic suspensions are already refined, but RS models add a lowered and stiffened suspension, 17” alloys, and quicker steering.  Four-wheel disc brakes grab like old men in a strip club.  Combine all that with a short wheelbase and you have a car that slurps up parking garages and narrow asphalt while saving its lungs for all-out Interstate bonzai runs.

So, what’s the downside?  The interior has a ton of plastic, but that’s the price for the price.  You have to modulate the throttle and clutch just right to keep the turbo from bogging.  Thirty-four mpg/highway is also nothing to throw a parade over in a car this size.  Broken pavement can rattle the chassis, but nothing like what I recently experienced in a $35,000 luxury car.  These are small gripes for an otherwise packed package. 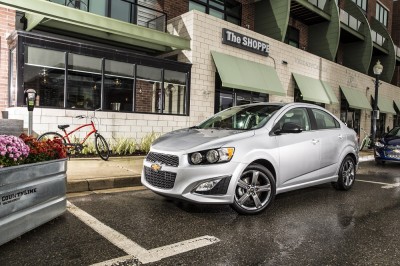 Cars like the Chevy Sonic were once bought because you had to, not because you wanted to.  Especially in RS trim, the little Michigan-built Chevy is a car that will enlighten young urban drivers, but also a car that will not bore experienced gasoline-fed enthusiasts.  An as-tested price of $20,925 is affordable for almost everyone.

Send questions and comments to Casey at AutoCasey@aol.com.