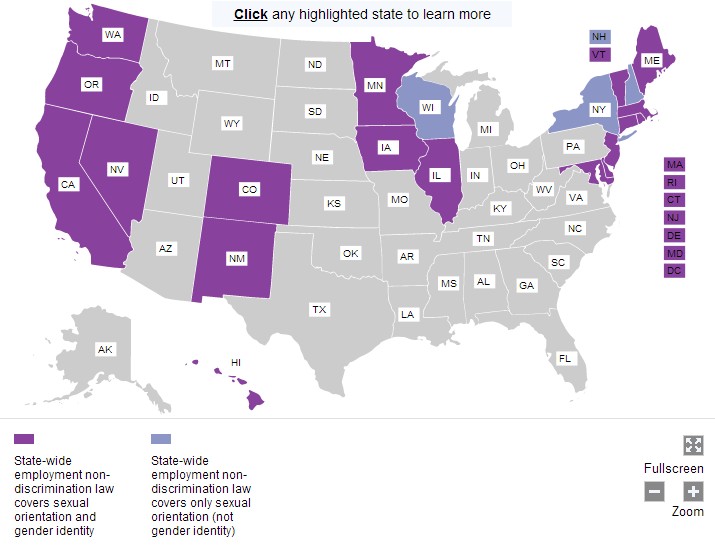 To many LGBT Americans, the thought of living in the closet seems ridiculous. It’s 2014: “Don’t Ask, Don’t Tell” is long gone, marriage equality is making a slow, steady march across the country, and polls show growing numbers of people support us in our desire to live and love openly.

Working in the closet? That’s a different story. For some — like the engineers who design our cars — it’s often a better idea to keep discussions of sexual orientation, gender identity, and whether they’d happily sign up for a Transgender Dating platform or a heterosexual alternative, away from the water cooler.

Patchwork of laws to protect workers

We’re confident that sexual orientation and gender identity will eventually be added to the federal Civil Rights Act, which already protects workers from discrimination based on race, religion, national origin, and sex.

But that day isn’t here yet. And in many, many places across the country, LGBT Americans can still be fired for revealing who they love.

Today, just 18 states and the District of Columbia offer employment protections for LGBT workers. Another three states prevent companies from discrimination based on sexual orientation only. That leaves 31 states without protections for transgender workers, and 29 with no LGBT protections at all.

Some cities that have tried to fill the gap by offering such protections (though not without much opposition). And President Obama recently issued an executive order preventing LGBT discrimination by federal contractors (which finally brought the knuckle-draggers at Exxon into the 21st century). But there are loopholes in many of those laws that allow discrimination for religious and other reasons.

Bottom line: in many parts of the country, you can still lose your job for being lesbian, gay, bisexual, or transgender. Sadly, we hear about those cases every week — sometimes every day.

Engineers in the closet

You might think that engineers, scientists, and other well-educated types wouldn’t have these sorts of problems. They work for universities and Fortune 500 companies, right? The kind of places where sexual orientation isn’t such a big deal?

A new survey carried out by the Institution of Engineering and Technology polled 356 LGBT engineers about their sexuality and their jobs. Here are some of the major takeaways:

We’re not there yet, but we’re getting there.

3 thoughts on “Many LGBT Engineers Still Work In The Closet”