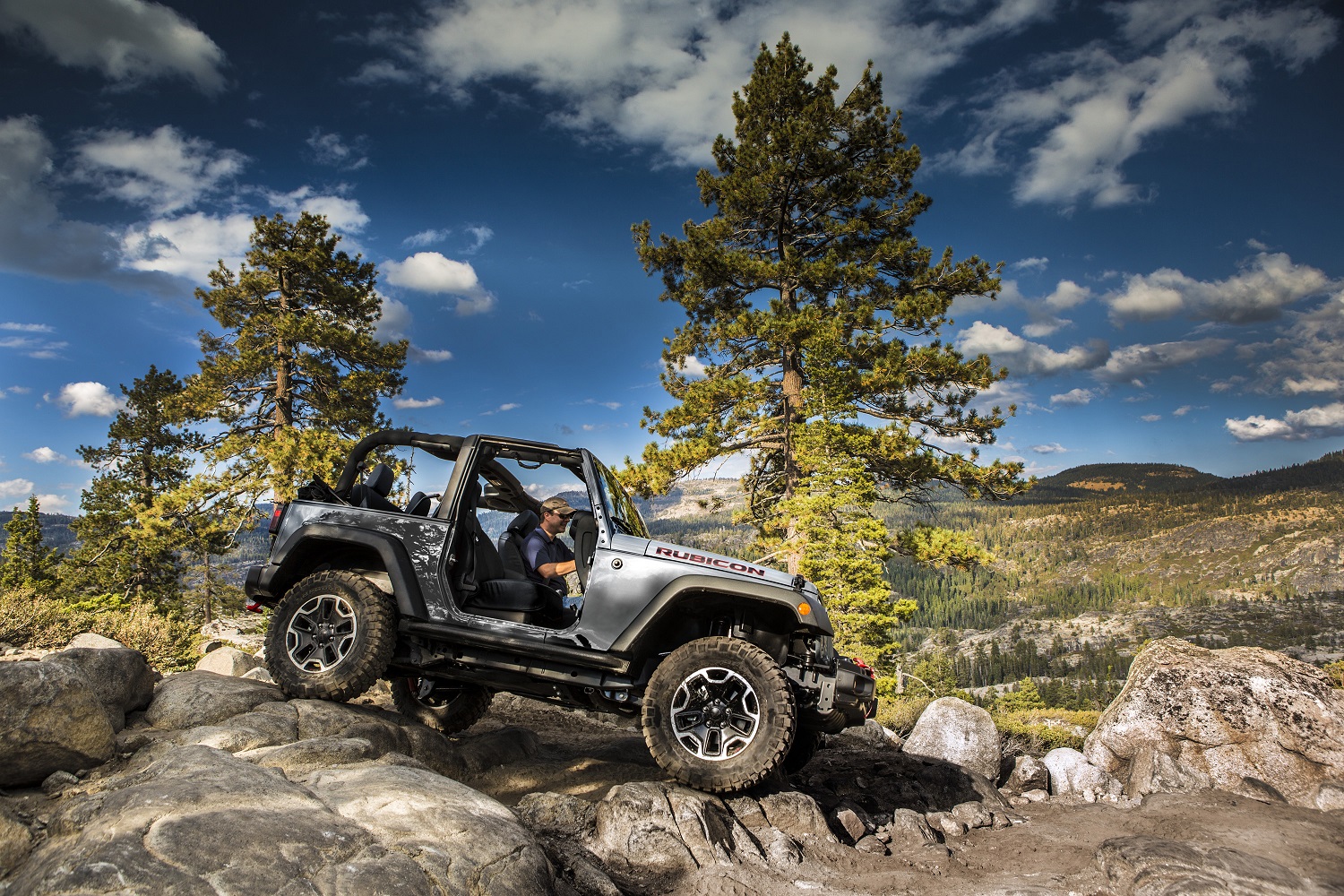 The idiom “Crossing the Rubicon” means to pass a point of no return, and refers to Julius Caesar‘s army’s crossing of the river in 49 BC, which was considered an act of insurrection. Because the course of the river has changed much since then, it is impossible to confirm exactly where the Rubicon flowed when Caesar and his legions crossed it, even though most evidence links it to the river officially so named. The river is perhaps most known as the place where Julius Caesar uttered the famous phrase “alea iacta est” – the die is cast.

Truer words from Wikipedia could not have been spoken about the Rubicon, either the ancient Roman river or the 2015 Jeep King of the Dirt and Sludge. Once you’ve taken the classic Wrangler off-road, nothing else quite compares. That’s the way it’s been for decades. The Jeep Wrangler is the ultimate in off-road Sport Utility Vehicles. No need to insult with a Cherokee or go commando in a Commander when all you need is a Wrangler. The 2015 Jeep Wrangler (Rubicon or other trims) is your car for getting down and dirty and still getting back above ground safely. Little else comes close. For those of you who have journeyed there and tried to go back, indeed, The Die is Cast.

Just keep in mind that if you must use your 2015 Wrangler for living in the city, you will be constantly reminded – with every bounce – that this Jeep is about as ‘city’ as the Unabomber. While capable, it sits high, bounces a lot, takes a lot of time and effort to get it to stop – and what the Wrangler naturally lacks in creature comforts becomes very, very obvious.

But first, let’s talk about how this legacy SUV handles when it is returned to its natural habitat – the great outdoors. (A teaching moment here: animals and all creatures do best when they can roam free and not be forced into some sort of closet. The 2015 Jeep Wrangler Rubicon cannot be tamed or kept quiet. And neither should you.)

A Chrysler Penastar V6 engine is standard in the 2015 Wrangler. This is Chrysler’s light-yet-powerful aluminum engine that has been getting some good press since its debut in 2011. This year’s Penastar gives you 285 horsepower and 260 lb-ft of torque (the one I tested was a 3.6 liter). That’s almost double what you used to get with a Wrangler, and admittedly, some reviewers feel that much power is wasted given that going fast in the Wrangler is less than a breeze.

With the Rubicon trim, you also get the Rubicon’s Rock-Trac 4WD System, which has a 4-to-1 low gear ratio that allows you to easily drive over just about anything big (but not at a high speed). It also has a 73.1 to 1 crawl ratio, which means that you can crawl over just about anything big or small. For people who 4-wheel, this means that literally going anywhere is a possible because your Rubicon is high (hopefully you are not unless you are a passenger) and the Ruby will seemingly drive itself. Yeah, yeah, you’ll want to keep your hands on the wheel, but experts agree that the engine and the fine-tuning on the 2015 Rubicon make it even more ideal for off-roading – and off-centering and possibly even off-everything for anyone who’s always a little off.

Something that I really appreciate is an abundance of skid plates under the carriage and rock rails on the sides. Simply put, the skid plates will protect you and the Jeep should you drive over something sharp and obnoxious (even sharp and obnoxious people) and the rock rails will keep you from tipping over should you misjudge anything that could flip you over like Fred Flintstone’s car once the steaming dinosaur ribs arrive.

The interior of the Rubicon is basic, but in a Shabby Chic kind of way. While the seats are comfortable (not so of past Wranglers) there is little luxury or elegance … but then, you don’t buy a Wrangler for those things, I am guessing. The Rubicon I tested was a two-door, so while passengers can climb in the back, being limber and not too large will help. Wranglers have always been very basic SUVs; the 2015 is much nicer than in years past but it is still a Utility vehicle that has some Sport to it.

The backseats now fold down (or back, depending on your angle) so that you can get a lot more stuff in your Wrangler. This is a big improvement, along with cloth seats and lumber support, something that was never a part of Jeeps of yore. In essence, the 2015 Jeep Wrangler is much more user-friendly than in years past.

Yet the manual gear shifting on the Rubicon is tricky. The gears are naturally set for four-wheeling, which is great for dexterity and precision but not for a whole lot of speed. Going over hill and Dale is precise but gearing up to 65 MPH is not, IMHO. Simply put: pay attention.

Something to keep in mind: A Jeep Wrangler is designed so that the doors and roof can come off easily (though there is not much ease to taking off the detachable top). As such, there is no spring-action in the doors, just a line of fiber to keep it attached to the car. Be careful when opening and closing the doors. Your strength will determine how wide it opens and how hard it pounds (does that sound gay?) Like Bullwinkle, be careful of your own strength. 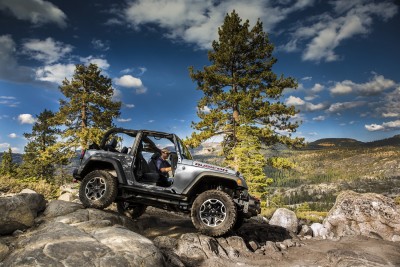 Also be careful when you park this beauty in a parking space. Remember, you are sitting high, and believe or not, that can give you a false sense of how close you are to all those shorter types who may be nipping at your heels. (BTW, don’t wear heels or flip-flops when driving, especially with a stick. That too gets awkward and, yes, dangerous.) The Rubicon is somewhat of a stripped-down model where the creature comforts of rearview parking and blind-side indicators just aren’t available. Be sure to use all your vision and all your senses when parking and driving this ultimate SUV. What rocks and ridges cannot destroy, a used Ford Escort in the other lane can.

Critics who know Jeep well praise the 2015 Wrangler Rubicon for being comfortable and easy to drive in traffic. Compared to Wranglers of the past, this is a true statement. But compared to what’s available in ride comfort today, the Wrangler is still not your vehicle for the city, the highway or any place where the road is smooth and the rest stops are plenty. Maybe I am just one of those queens who likes to be comfortable, and trust me, I know comfort. Again, the Wrangler ain’t bad, but it ain’t your ideal off-road / inner-city combo vehicle.

If you buy the 2015 Jeep Wrangler Rubicon, don’t keep it in your driveway. Let it roam free, beyond the confines of the closet, however defined.