After our long, winding first day on the road, the three of us felt like we could sleep in a bit — and we did. We had a lazy start to the day, with a leisurely breakfast of leftovers from our grocery store visit, and a round or two of farewell head-butts from Peanut Butter and Jelly (who wouldn’t hold still for pics, unfortunately). Then, we headed north from Mendocino. 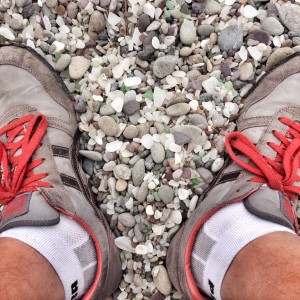 We very quickly came to the town of Fort Bragg. It wasn’t much to look at — far more spread out, with far more franchises than the quaint towns we’d passed through on our first day — but one of the owners of The Andiron had suggested that we stop just past Fort Bragg to visit Glass Beach. It was, as you might guess, the site of an old glass factory, and the beach was littered with sea glass, the edges worn down as smooth as pebbles. (You can’t tell it from the photo at right, but at least half of those “rocks” between my feet are actually glass.) Nothing much to see beyond that, but it was interesting.

Before going too much further, we topped off the tank — and it’s a good thing we did. After Fort Bragg, there were very few gas stations for the rest of the morning. But the scenery? Holy crap, you guys: the scenery.

At that point, I was driving, so I couldn’t take photos, but you know those beautiful commercials of cars zipping along mountainside roads above crashing waves? That’s where we were. We were still on a two-lane highway, still hugging the coast, still making lots of hairpin turns as the topography shifted, but there seemed to be less fog here, which made the views exponentially more stunning.

One thing I should mention, though: if you’re a gawker, a sight-seer, a rubber-necker always eager to drink in the scenic views, take note of the well-marked turnouts on the side of the road. They’re little stretches of shoulder that allow you to pull over and let the cars behind you pass. Remember: not everyone on the Pacific Coast Highway is a tourist. Some are late for work.

Eventually, the road headed inland for a bit, but the twists and turns continued. Just as I was beginning to think, “Okay, I’ve seen enough pine-covered precipices for a while,” Highway 1 rejoined the larger 101. It was a welcome change. The scenery was just as good as it had been on the PCH — green valleys and mountains as far as the eye could see — but I didn’t have to ride the brakes as much.

We stopped again for gas, picked up some lunch supplies, and made a bee-line for the Avenue of the Giants, just off the 101 in Humboldt Redwoods State Park. The road runs beside a crystal-clear stream, so we found a place to pull over, parked the car, and sat in the shade beside the water for a picnic lunch. It was crazy magical. (See illustration at right if you don’t believe me.) 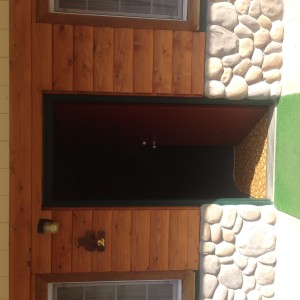 The remaining few hours in the car that day were pretty uneventful — pretty, yes, but uneventful. There weren’t too many spots to stay the night along that stretch, so my husband had made reservations in the town of Klamath at a place called Motel Trees, which was part of something called the Trees of Mystery. We arrived not long before sundown, as the Trees of Mystery was closing, and weirdly, there was nothing about it in our motel room, so its purpose remained a mystery until we reached an area with better cell service and we could Google it. (Oh, did I mention? No cell service along this stretch. Thanks, AT&T.)

As it turns out, Trees of Mystery is like a natural amusement park, with gondola rides through the redwoods and such. Motel Trees on the other hand, was more like the Bates Motel, which is the sort of amusement park I could probably do without. Yes, it was clean and tidy, but if there had been a portrait on the wall, I’m pretty sure the eyes would’ve blinked. It was the kind of place the Brady family might’ve stayed before they all got locked up in a ghost town jail. A little weird and creepy.

Another downside of that location: very few dining options, and our snack supplies were running low. We doubled-back about five miles and hit up a Native American casino, where the food was so-so but thankfully, the waitstaff were great.

Even better: next to the motel was a half-mile trail to something called the “hidden beach”. The trail was beautiful and well-kept, and true to its word, after about half a mile, it ended at a stunning, picture-perfect Pacific Beach. In keeping with the Psycho theme, (which was, now that I think of it, an interesting follow-up to The Birds theme from the day before) it felt like we were a thousand miles from where anyone could hear us scream. Or at least half a mile. Given the low occupancy rate of Motel Trees, maybe more.

After an hour or so, we hiked back to the motel, bolted the doors, and settled in for a quiet night of reading and dreams of better coffee the next day.