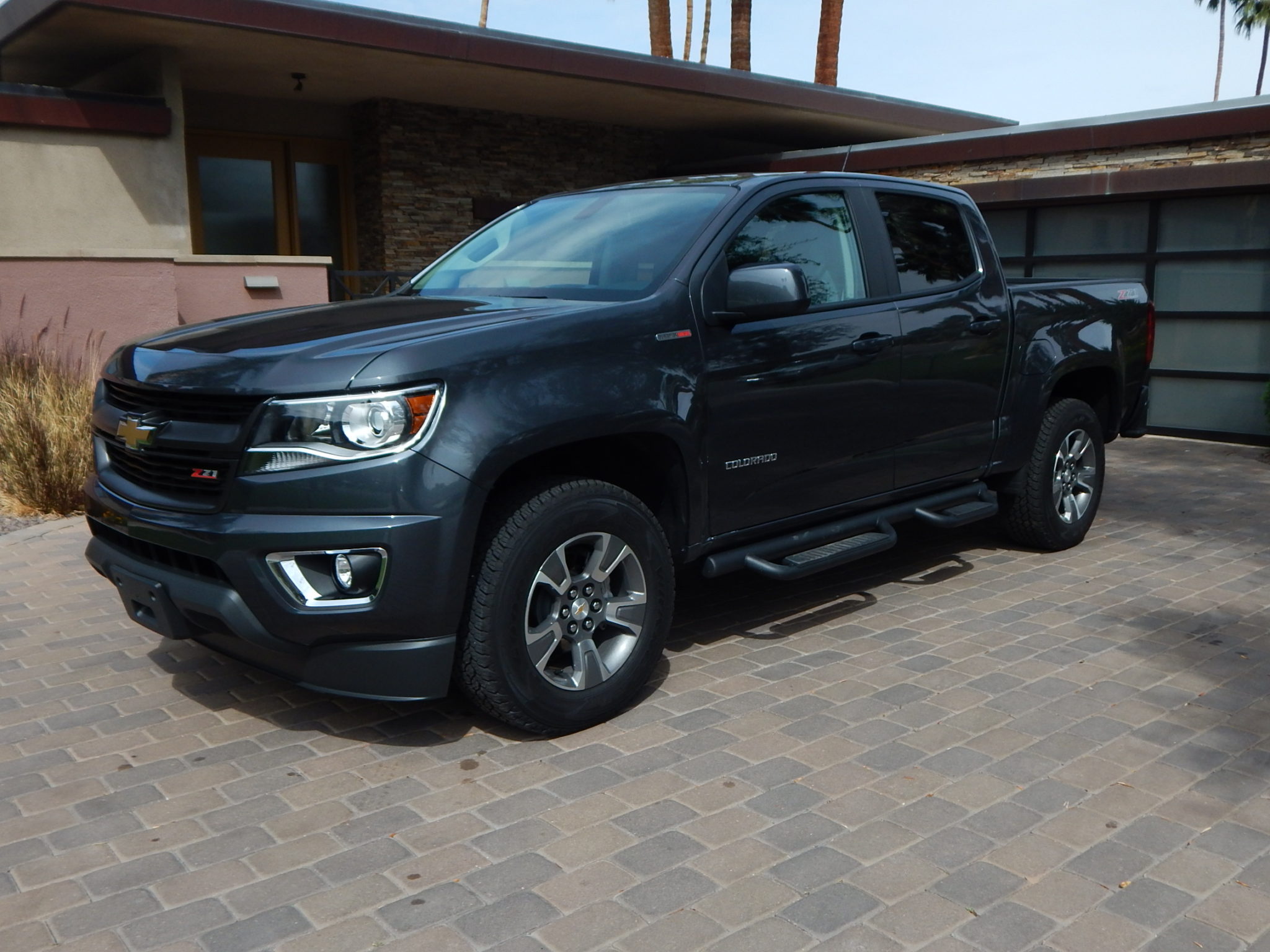 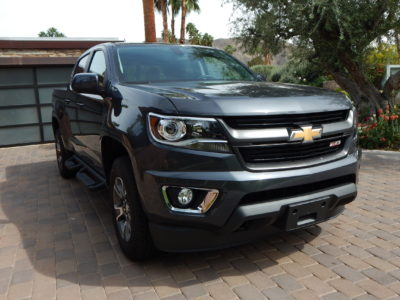 Compact pickups have come a long way since the days of the Lil’ Hustler. You remember the Lil’ Hustler –the compact Datsun pickup which, along with the Toyota Hilux, created the market for compact pickups back in the 60s, to the delight of pool services and surfers alike. Chevrolet got into the game with the Isuzu-built Chevy LUV back in the 70s, which led to the compact S-10 in 1982 and the slightly larger but all-in-all uninspiring Colorado of 2004-2012.

The Colorado returned last year, but only the name is the same. The truck itself is all new, longer and wider, with new powertrain combinations and a very upscale interior. It won the Motor Trend Truck of the Year award in 2015 and 2016- beating out the restyled Tacoma and the all-new Nissan Titan, and has been very successful in the marketplace. 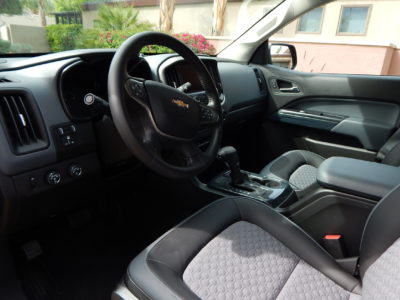 Colorado represents the latest generation of mid-sized Chevrolet trucks, but is hardly a mid-size in my book. In fact, the length and height are within an inch of a full-sized ‘73 Chevrolet C10 pickup with the 8-foot bed -at roughly 212” long and 69” high each- and it’s only about four inches narrower. (I know, only four inches…) But bear in mind that the current Silverado is freakin’ huge, so really the Colorado is just about the perfect size, and I especially appreciate the fact that it IS slightly narrower and much easier to get into tight places. And we all find ourselves in tight places.

The Colorado was all-new last year, and while it’s pretty much the same for ‘15 there is big news under the hood of our test Colorado- the all-new optional 2.8 liter Turbo Diesel Duramax four. It’s an all new engine, which produces 181 horsepower but a monstrous 369 lb/ft of torque. It’s teeming with the latest technology, including a variable geometry turbocharger and an internal balance shaft for smoothness. It’s paired with the 6L50 six-speed automatic which uses a unique Centrifugal Pendulum Vibration Absorber in the torque converter to reduce powertrain noise and vibration, and includes smart diesel exhaust braking and an integrated trailer brake controller. Chevy also points out that the EPA has issued a Certificate of Conformity for the emission controls on the Duramax 2.8. Take that, Volkswagen. 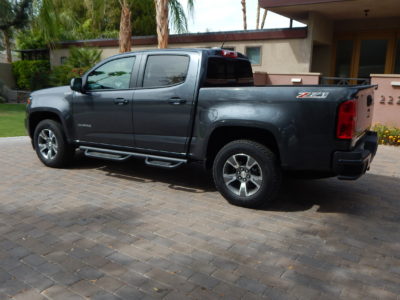 The Duramax Diesel option is available only on the club cab model, in LT or Z71 trim with a choice of 2 or 4 wheel drive. Fuel economy ratings are excellent. The 2WD version is rated at 31 mpg highway, 22 city, and 25 combined. The AWD version achieved 2 mpg less in each cycle of the test, so its numbers are 29, 20 and 23. Chevy says these results represent the most fuel efficient pickup in America and project a highway driving range of just over 650 miles per tank, and again in the 2WD version, can be equipped to tow up to 7,700 pounds.

It all comes at a price, with the Duramax priced at $4,965 above the base 2.5 liter four, (which incidentally is rated at 20 city/ 27 highway.) Throw into the mix that, at current fuel prices, diesel in Palm Springs is significantly less expensive than unleaded regular- 56 cents per gallon on the day I refueled it. So while the diesel costs a chunk of change- current diesel prices dramatically accelerate the payback period, especially for heavy freeway users. 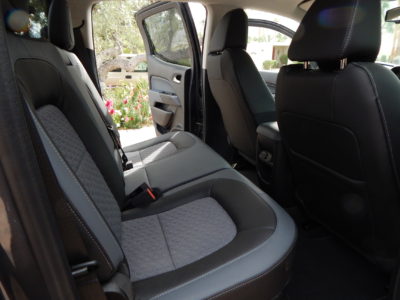 Our test Colorado was a top of the line 4WD Z71 Crew Cab with the short box and had a base price of $34,640. Added to that were the 2.8 Liter Duramax- $3905 upgrade over the standard V-6, a really useful set of assist straps at $745, Bose Audio for $500, Navigation integrated into the Chevy MyLink audio for $495, a spray on bed liner for $475 and $250 worth of trailer towing. Add the $895 destination charge and we’re looking at $41,905 worth of Colorado, and while that isn’t trivial, it’s one heck of a nice truck and an out and out bargain compared to some of the high end full-sized pickups out there.

Behind the wheel it’s much more like a car than a truck. The interior plastics are well fitted and soft to the touch. The bucket seats are very supportive, with geometric patterned fabric inserts and leatherette trim. It’s not Range Rover flashy, but well executed and tasteful. The MyLink interface works exactly as it does in Chevy passenger cars, including Apple InCar and apps for Android users as well. Glow plugs and diesel wait lights are a thing of the past, there’s even remote starting for the 2.8 Duramax. There’s no soot, no smell, and no knocking- just a light little tap that sounds very Mercedes Sprinter to me.

All in all the Colorado is a smooth operator. Chevy paid lots of attention to things like insulation and vibration isolation so the cabin is quiet and vibration free, and so carlike you might forget it’s a truck if you didn’t have to climb up into it. Visibility is very good and the standard rear vision camera is an excellent aide. The ride is truck smooth, it’s not quite going to be a Cadillac riding on all terrain 255 65R/17 Kevlar tires, but it’s quite controlled and comfortable and rattle free. And unlike some of the old extended cabs with the stub doors, the truck has a very solid feel. Steering has a very solid feel and it’s all but flingable, which is saying something for a vehicle of around 4,400 pounds.