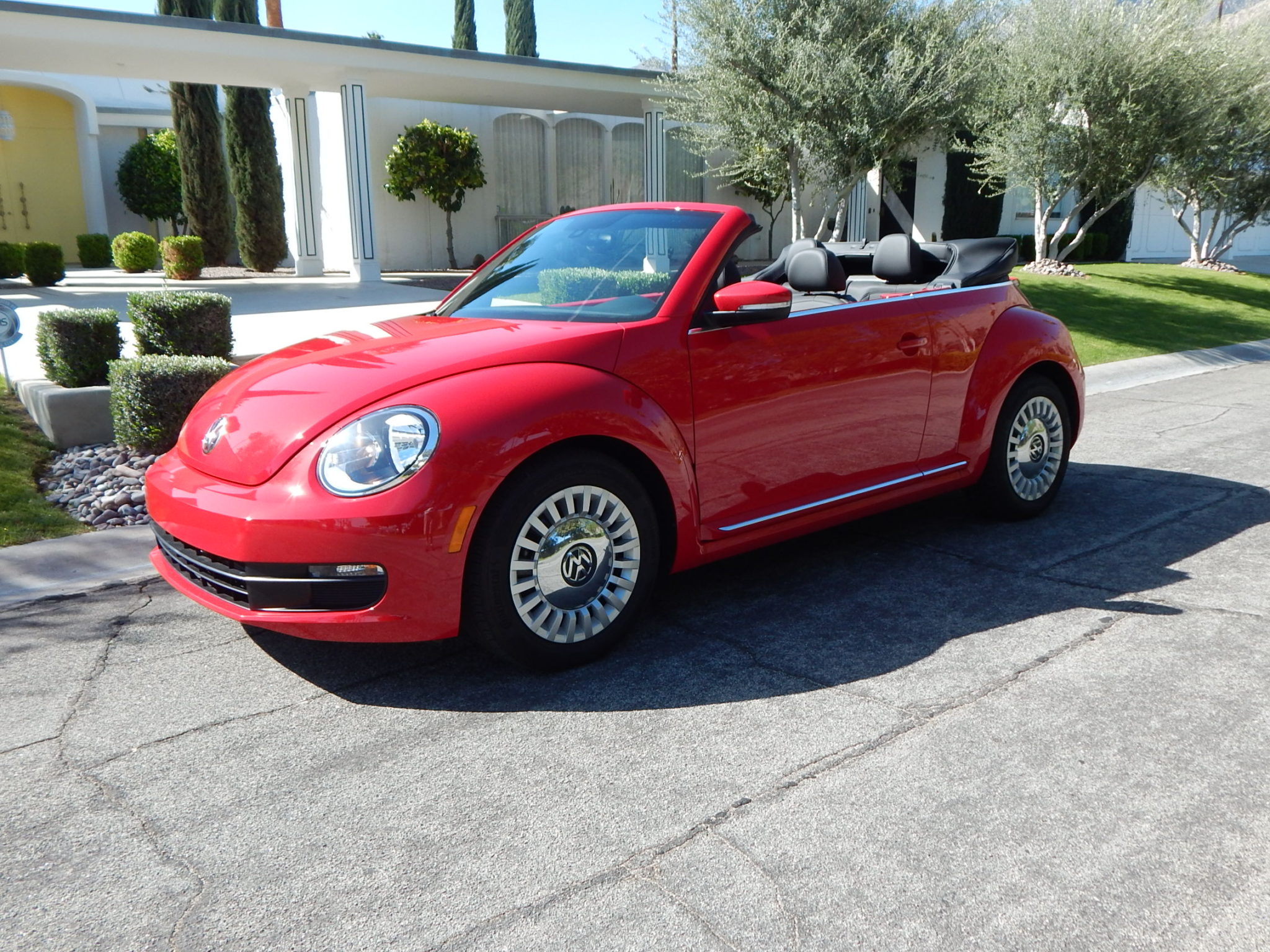 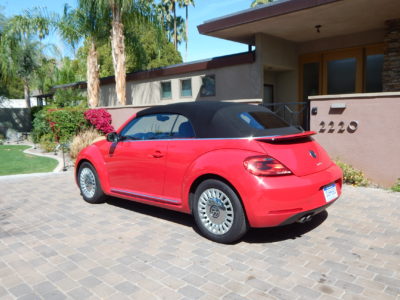 It’s been a couple of years since I’ve been behind the wheel of the Newer-Than-New Beetle, so when VW offered up a convertible, I readily agreed. I’ve spent time behind the wheel of all the previous iterations but hadn’t yet experienced the new base 1.8T turbo four version.

My test car was a 1.8 T SE, which comes in the middle of the 1.8T range. The base S is priced at $26,310, the SE adds keyless entry with pushbutton start, a color touch screen with integrated sound system, an integrated back-up camera and Apple In-Car for a list price of $28,890. The $31,320 SEL adds 18” wheels, Fender audio and a leather trimmed interior. There are more upscale models as well, culminating in a 2.0T R-Line SEL loaded with goodies that will set you back $36,565- which is serious coin for a Beetle.

One of the first things I noted about the test car is how pleasant it was in nearly base trim- it didn’t feel like I was sitting in the cheap seats. The audio system wasn’t quite Fender but was more than passable, especially with the top down most of the time I had it. I wouldn’t quite go S because of the back-up cam and the Apple Car Play, but all in all I think the SE represented a good value at a squeak under $29,000 and there wasn’t anything I felt like I was missing. 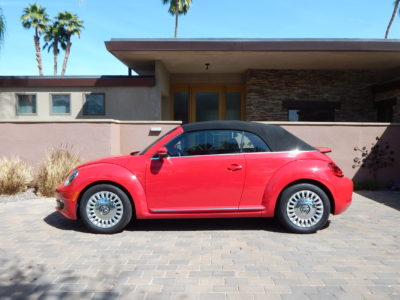 The old base five cylinder was one of those so-called “Cooking sherry” engines- adequate but lacking finesse. Replacing it as the base engine a year or so back is the EA888, an all-new 1.8 liter turbo four that offers both increased power and better fuel economy. It features all-aluminum construction, direct injection, and even an integral exhaust manifold in the cylinder head. It was designed from scratch for a turbocharger, and in this application produces 170 horsepower and 184 lb-ft of torque at an amazingly low 1500 rpm. It’s not the kind of car to run instrumented tests on, but suffice to say It feels quick and lively off the line and highly flingable and offers fuel economy ratings of 25 city/ 34 highway. The 1.8T is mated to VW’s six-speed automatic with both sport and manual shift modes- I’ve learned over the years to just put it in Sport and leave it there. 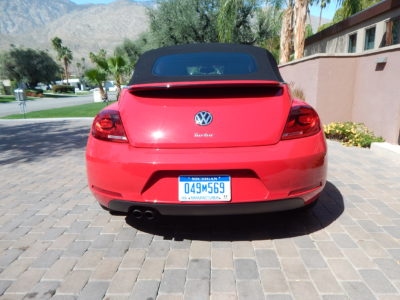 Aside from the drivetrain, not a great deal has changed. One favorite feature is the convertible top- the Beetle’s snug little beret is multi-layered, fully finished inside and out and operates at the touch of a single button, including raising or lowering all four power windows. When raised, it’s only slightly noisier inside than a comparable sedan and is the head of the class in compact soft tops. One negative is rearward visibility out of the cute little rear window, another is the Teutonic torture device they call the top boot. Last time I gave up and left the damn thing in the little trunklet, this year I was able to get two of the fasteners latched before calling Onkel.

Let’s take a minute to focus on what it doesn’t have: noise and vibration. There’s no cowl shake to speak of and with the top raised, you’d be hard pressed to even notice that you’re in a convertible. People think that the sun always shines in Palm Springs but rain falls here too and I actually encountered two days of rain during my test. The top was leak free, the cabin remained dry as a bone inside and the heater warmed up the cabin in no time at all.

And that really says a lot about the Beetle Convertible- it’s so well designed and well constructed that one could literally forget that it’s a convertible until the top button is pushed, and that’s serious praise indeed. My list of likes is long, and quibbles are few. If you’re shopping for a convertible, this one belongs on the short list.