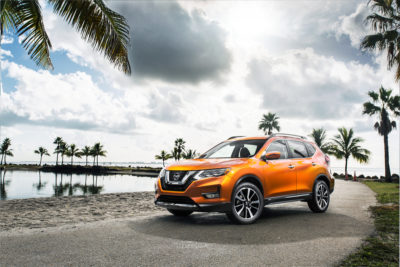 I was completely baffled when the first-generation Nissan Rogue raced up the sales charts to become one of the best-selling compact crossovers. It buzzed like your sleeping mother, contained more cheap plastic than a discount toy store, and steered as assuredly as a sinking rowboat. Then, the second-generation came along. It was stylish, roomy, handled well, and was near silent on the highway. More glitz and green for 2017 makes it even better.

Let’s start with the obvious: It’s a lot prettier to look at. A bolder version of Nissan’s V-Motion grille with chrome detailing adorns the front while available 19” wheels (17” on our SV edition) pump up the jam. Signature LED driving lights, LED turn signals, and roof rails glitz it up. Chiseled sheetmetal looks handsome. It’s much more exciting than the frump party it exited. 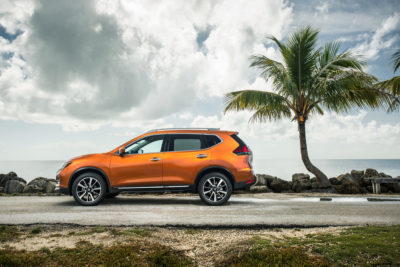 You can get contrasting color leather that feels and looks sublime, but our test car came with beige cloth seats. It’s OK – they’re heated and slide under a D-shaped heated leather-wrapped steering wheel that’s new for 2017. You can also get three-row seating, but ours traded for underfloor storage. Tune in with the 6-speaker audio system connected to USB and Bluetooth. Navigation, dual-zone automatic climate control, keyless entry, and push button starting add convenience. Open the rear hatch by swiping your foot.

Technology is accessed via voice or touchscreen surrounded by slick piano black trim. Large volume and tuning knobs are easy to use – as are the beefy climate controls. Safety is enhanced by Nissan’s Around View Monitor, which provides a bird’s eye view, blind spot warning, and rear cross traffic alert. Step up to higher trim levels for Forward Emergency Braking with Pedestrian Detection, Lane Departure Prevention, and Intelligent Cruise Control. 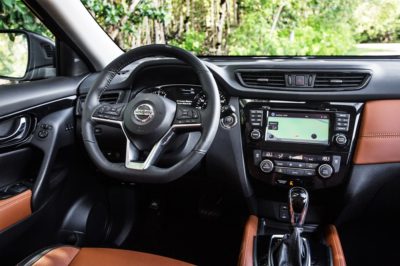 That’s just to get you to the road. Wait until you get on it. Step in for a 2.5-liter four-cylinder engine that ushers out 170 horsepower. It’s connected to a continuously-variable transmission, which is usually a buzz-fest, but Nissan’s are smooth and muted. I’d still prefer a nice 6-, or even 9-speed automatic transmission, but the CVT is acceptable. An Eco mode optimizes the powertrain and climate control to conserve fossils. All of this enables fuel economy ratings of 25/32-MPG city/hwy.

And, if that’s not efficient enough for you, go for the greener hybrid. The gas/electric system combines a 2.0-liter four-cylinder engine with a 30 kW electric motor and lithium-ion batteries to deliver a combined 176 horsepower and 33/35-MPG city/hwy. I drove the hybrid on hilly and curvy roads outside of Atlanta last October, and while I wouldn’t recommend racing around farm trucks on challenging two-lanes, there’s plenty of smooth power to rush up to speed entering highways or just slipping around town. 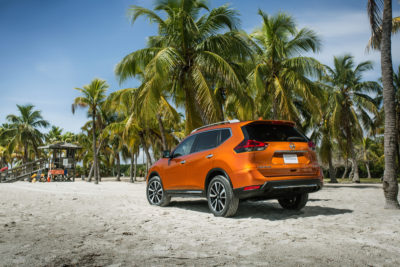 Beyond the powertrains, the Rogue is a nice drive. The four-wheel independent suspension soaks up rough pavement like a thick rubber sponge while giving the crossover relatively athletic handling through sweeping on-ramps. I’ve driven the new Rogue hundreds of miles and it always provided a refined ride.

Despite strong sales, Nissan’s initial plans for going Rogue were sadly under-developed. But, that little crossover set them up for the current generation, with a little freshening for 2017, to be a real leader in its class. I get why people are buying so many. It’s quiet, comfortable, and maneuverable. Delightful. A base price of $23,820 – $29,095 as tested – makes it formidable competition for the Honda CR-V, Toyota RAV4, Chevy Equinox, Ford Escape, Jeep Compass, and Hyundai Tucson.