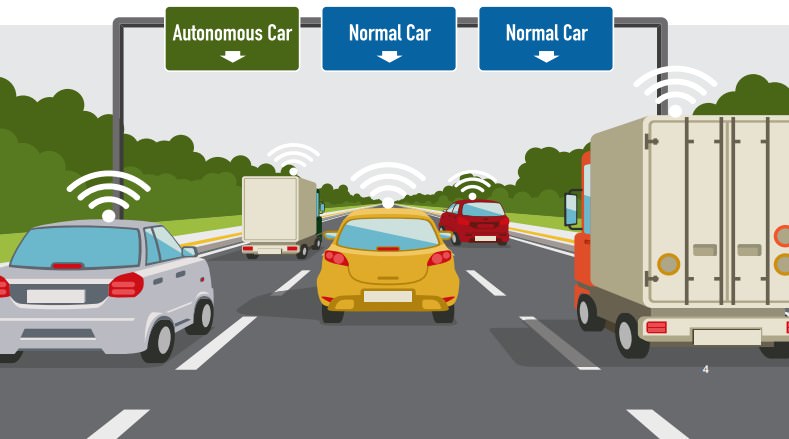 Despite the hype around self-driving cars, it’s going to be decades before every last human driver gives up her keys. In the meantime, we’re all going to have to share the road.

How’s that gonna work? Fast Company has published a handy overview of one proposal from the Madrona Venture Group that could be an interesting test:

Give each class of car its own lanes, or even entire roads. That’s the thrust of a white paper proposal that imagines an “autonomous vehicle corridor” replacing the I-5 freeway between Seattle and Vancouver. In other words, that entire stretch of critical roadway linking two major cities across an international border would be given over to driverless cars by 2040, with no old-fashioned, human piloted, cars allowed….

In the early days of the transition, any autonomous vehicle, no matter its powertrain or number of occupants, would be allowed to use existing HOV lanes on the I-5. These carpool lanes are usually separated from the rest of the traffic, making them easy to handle even for today’s semi-autonomous driving systems. The Madrona team says this should be implemented within a year.

By 2025, that HOV lane would be closed to human drivers, along with the one next to it (the highway is eight lanes wide). The paper’s authors say those two lanes could be used as three, as autonomous vehicles can safely drive more closely together. By 2030, the majority of the highway would be closed to human drivers, with the takeover complete by 2040.

The article and the referenced whitepaper make for a great humpday read.