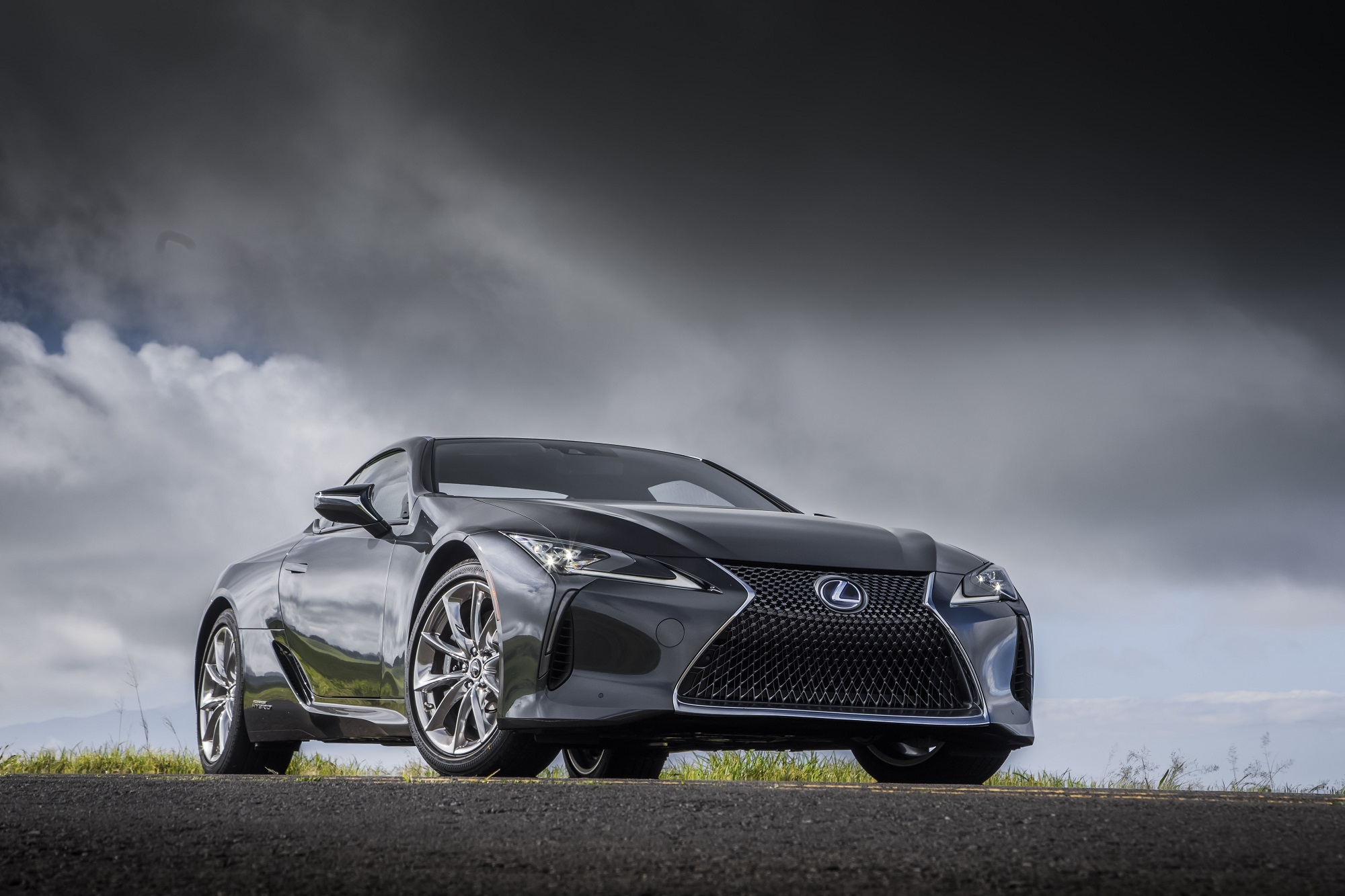 Over fifteen years ago, Lexus took a lead role in the movie Minority Report starring Tom Cruise with a bright red concept called the “2054”.  In theory, it ran on electricity from hydrogen fuel cells, drove itself, and was a vision of a dystopian future in which the car may have been the best thing going.  Here in the future, Lexus presents us with a production car that’s nearly as cool as the concept.

While it looks like a concept car, the LC 500h takes an entirely different stylistic route to coolness.  Based on the LF-LC concept that debuted at the 2012 Detroit auto show, where it won an EyesOn Design award, the LC looks like it was shaped by the cosmos, then beamed down for human delight.

A wide exotic profile stems from a hood drawn tight over the flared front fenders and flowing down into Lexus’ large spindle grille.  The low floating roof hovers over wide rear fenders and into the high decklid.  Jewelry like the triple LED headlamps, L-shaped daytime running lights, cut side sculpting, and vertical silver elements front and rear add concept car details – as do the glass roof, 20” wheels, and mirrors integrated with the taillamps that add dimension. 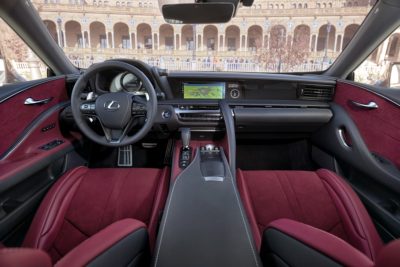 The interior is everything you would expect from a futuristic Lexus.  Large flatscreens for the instruments and infotainment dominate the dashboard in a wide horizontal sweep.  Beneath are controls for climate.  Heated and ventilated front seats, heated steering wheel, ambient lighting, and 13-speaker Mark Levinson audio system cocoon passengers.  A comprehensive head-up display hovers over the hood.  Alcantara suede on the doors, cosseting leather sport seats, stitched coverings for the dash and console, and sculptural pattern beneath plastic on the passenger side are pure art.  Definitely choose intoxicating Rioja red for the seats and accents.

The infotainment controls, however, are not so intoxicating.  Sure, having a touch pad to control climate control, audio, and navigation sounds cool, but have you ever tried to use a desktop computer while driving 70 mph in traffic?  Not a good plan!  And, having to go multiple menus deep to adjust the heated seats is a bit much.  Lexus seems married to this control system, but there are easier ways, so I’d recommend a divorce. 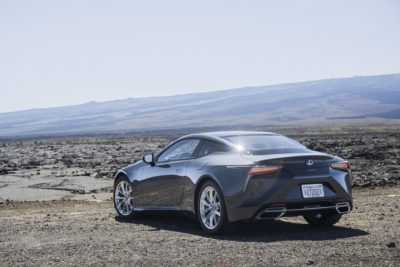 Under the exotic bodywork is an equally exotic powertrain.  The fossil-burning part is a 3.5-liter V6 engine, but that’s paired with lithium-ion batteries to generate 354 horsepower – powerful enough to launch the rear-drive coupe 0-60 mph in 4.7 seconds and to a 155 mph top speed.  It can run up to 87 mph on electricity alone.  Leave it in auto mode, or use the magnesium paddles behind the steering wheel to shift through 10 pre-determined gear ratios.  Thanks in part to regenerative brakes, fuel economy is rated 26/35-MPG city/hwy.  The balance of supercar acceleration and compact car fuel economy is superb.

Make no mistake; the LC is a big car.  It’s based on the same architecture that underpins the flagship LS sedan and weighs a pudgy 4,435 lbs.  Engineers worked hard to deliver a nearly 50/50 weight balance, with mass placed as close to the car’s center as possible.  Active rear steering, variable gear ratio steering, and customizable drive modes delight drivers with a car that transforms from comfy highway cruiser to stiff track hawk with the turn of a dial attached to the instrument binnacle. 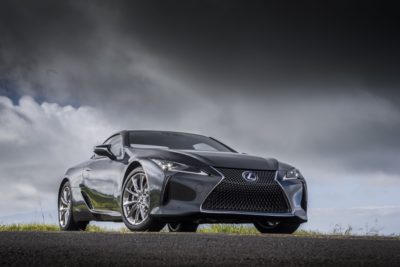 The Lexus LC 500h may not be quite the self-driving supercar we were promised in Minority Report, but it’s the supercar for today’s “future”.  It looks future-tech exotic, snaps heads at every corner, is electrified, and is rolling sculpture.  I just wish Lexus would re-think the “joy pad” controls.  A base price of $96,510, or $102,025 as tested, puts the LC 500h against the BMW i8, Mercedes-AMG GT, and Chevrolet Corvette Z06.