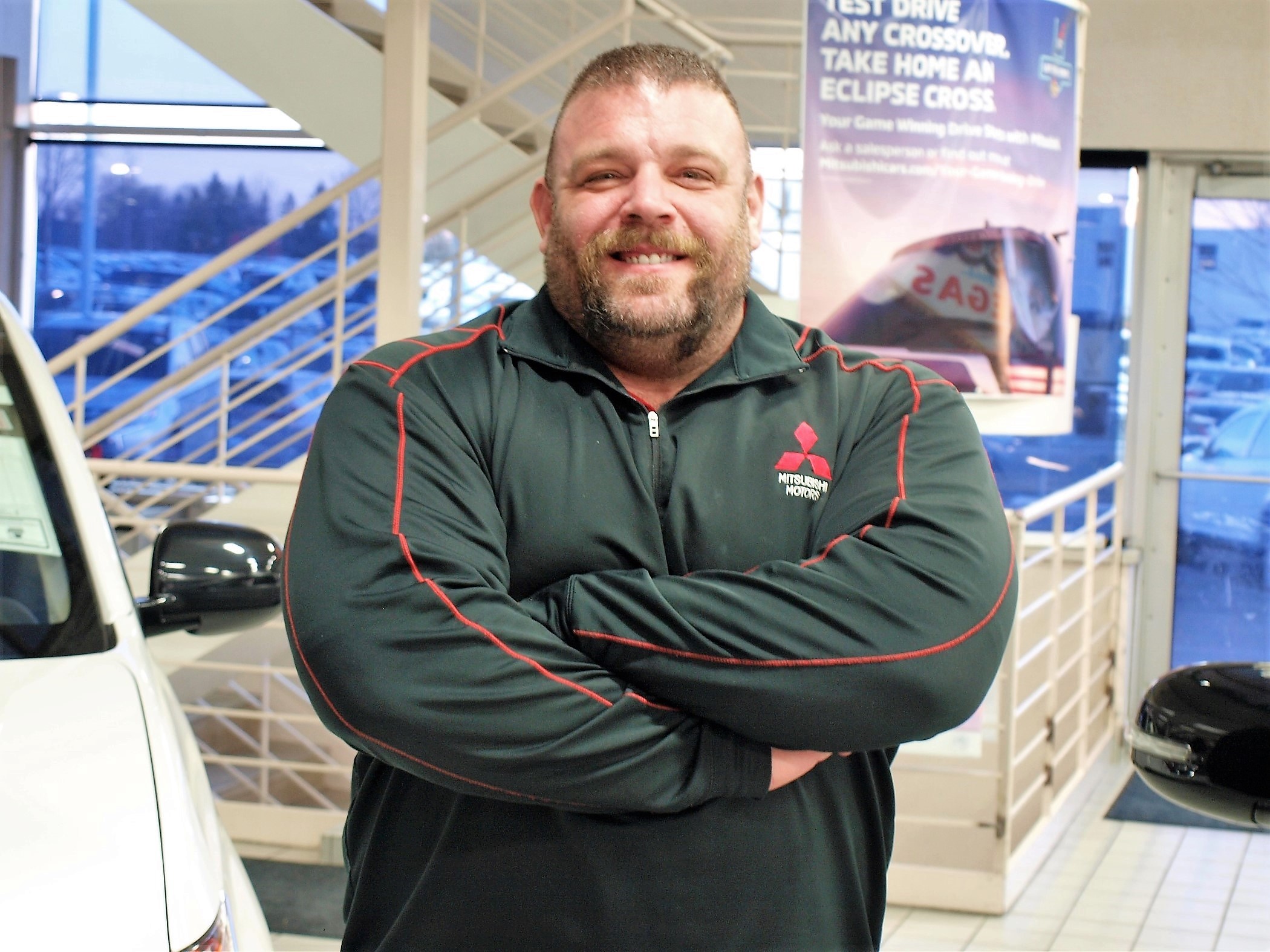 Meet the friendliest Bear in the automotive retail business!

Normally, that would describe a Bear-identified gay, bisexual, or trans man who might be a top salesperson, parts person, or a service lane greeter. He could be a sales manager. Maybe someone who runs a department inside of the dealership. We probably know someone – or a few – who fit this description at any given automotive business across the country.

However, this particular Bear happens to be the General Manager of a dealership. In the hierarchy of a dealership, they are the heart and soul of the dealership and the driving force of that store’s success – or failure.

Who is this Bear that I speak of? You may have heard of him – Richard Herod III?

Herod is the General Manager of White Bear Mitsubishi, located north of St. Paul, Minnesota. He has appeared on this site before – six years ago, when he spearheaded a grassroots campaign to amplify the vote against the proposed amendment to the state’s constitution on defining marriage between a man and a woman. Luckily – and perhaps in part due to his and other people’s efforts in this part of the campaign – the amendment failed with the voters in 2012.

However, Herod’s visibility continues as one of a few dealership general managers in his market who put his face and name out in public. One such example was some outtakes from a commercial that went viral featuring himself, the dealership mascot, a tall white polar bear, and the University of Minnesota’s mascot, Goldy Gopher, on the hockey rink at Mariucci Arena on the university’s campus. The video showed the dealership mascot falling down repeatedly on the ice.

Of course, Herod kept his composure during these outtakes.

There is more to Herod than these commercial outtakes and activism. He tends to have a good track record of converting several auto leads to reach the top in terms of sales among Mitsubishi dealers in his region. Also, under his leadership, his store has also garnered other key accolades from Mitsubishi Motors North America in terms of having the best in customer satisfaction among all dealerships nationwide.

Perhaps, in the near future, under the leadership of Herod, the store can grow and for that, they can take commercial real estate loans or other such loans. By availing of such loan programs, the store might also be able to meet its long-term capital needs and maybe even buy-out equity partners or competitors.

But, how did Herod get there? “I think I tripped my way to the top,” said Herod. “I started at the dealership part-time as a cashier 22 years ago, answered an ad in the paper for a cashier position, while I was going to college, and in the interview it was discovered that I was going to school for business and marketing. And during that interview walked out managing the dealerships newsletters and websites and everything else on top of being a part-time cashier. So that was pretty fun.”

At that point, the dealership management asked Herod what he was doing after college. Herod thought he was going to Corporate America. Management thought otherwise and suggested that Herod start selling cars. From there, Herod got the knack to succeed in the automotive retail business. He explained that he “went through sales and finance for a short stint, BDC (Business Development Center) manager, a desk manager, internet director, general sales manager and, now, general manager. That’s 22 years.”

It is worth noting that Herod began when the store he was working at was a Saturn retailer. When Saturn became part of General Motors’ “old” assets to be liquidated, the White Bear Lake store turned to sell Mitsubishis and Suzukis. It was the idea of Herod to take on the troubled Japanese automaker at the former Saturn retailer. The rest, you might say, was history.

Through the 2010s, Herod turned selling Mitsubishis into a major success. In the first month of selling the brand, Herod’s dealership delivered only two new Mitsubishis. Today, the dealership sells 130 Mitsubishis a month, making White Bear second in the nation for new car volume. The dealership has to most definitely consider streamlining their transactions and make the experience better for their customers, likely with the introduction of contactless payments and seamless transactions; for this, there could arise a need to compare merchant service options and choose one that Herod and the management would deem beneficial for their increased sales and customer traffic. Monthly, Herod stated that his dealership sells 250-260 units a month – including used vehicles. To help build upon his business, his retail point of sales systems from companies like Revel Systems will need to be updated consistently, but with the successes he’s been having there is no doubt he would forget.

One of the keys to the success of Herod and White Bear Mitsubishi is driven by the his being out, proud, and active in the LGBT community in the Twin Cities. “Because of the adversity I experienced growing up being gay,” said Herod. “I believe those challenges prepared me for being successful in the car business.”

Herod further explains, “I came out of the closet two years after I started working at the dealership. And pretty much everyone embraced me. From management all the way down, it felt like a really safe place to grow into my identity. Which was fantastic.”

While LGBT automotive retail professionals are gaining in prominence in the industry, Herod offers a offers this advice to those of us in the business. “[T]ry to work the way up in the car business,” said Herod, “I think at the end of the day people buy from people they like and trust. And I don’t know that there’s any sales training out there that can teach that. If you’re an honest, trustworthy person, you’re [going to] be successful. You just need people to feel like that when they’re done dealing with you. At the end of the day, do they feel like you advocated for them, you did everything you could to help them purchase the right car, truck, van or SUV and if they feel like they did then they’re [going to] tell their friends, their family and you’re [going to] be more successful because that’s what you did.”

Considering Herod’s success as an out LGBT automotive retail professional at a high level, the only way is to move up – and be like him. There are only a few that are at this level – perhaps a few more in even higher places in the industry. But, Herod’s story is a good example of how you can succeed and be true to yourself and your community.