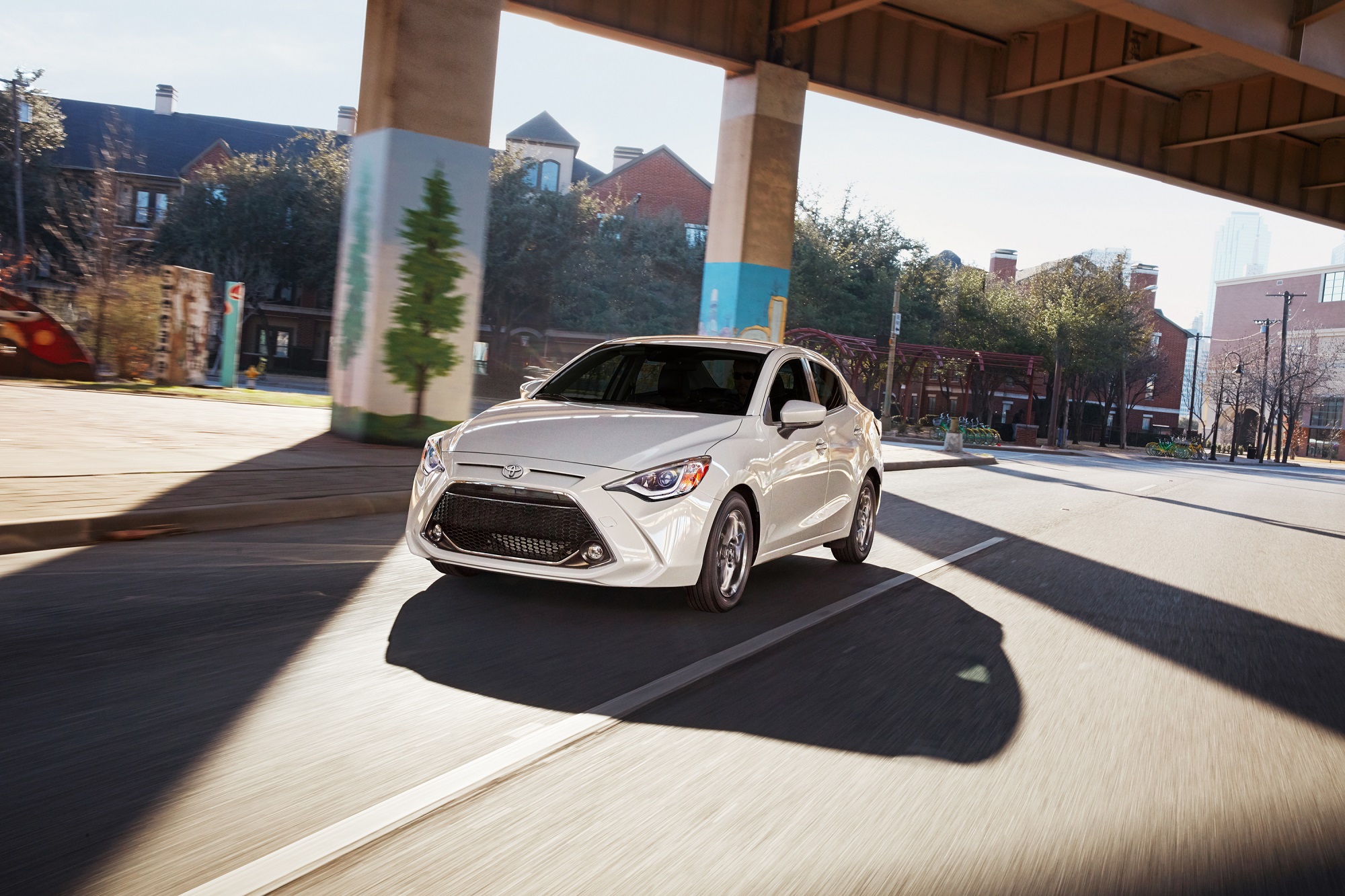 I read stories all of the time about how expensive cars are getting.  Sure, if you look at large three-row rolling rumpus rooms with video monitors, surround-sound audio, and enough gadgets for the vehicle to virtually drive itself, cars are expensive.  But, it’s also possible to buy a very stylish little car that handles well, spoils with technology, and returns impressive fuel economy.  You might find the 2020 Toyota Yaris speaks fluent cool.

But, you might also find the Yaris is not all it appears.  Beyond the large mouth grille, the design looks remarkably like a smaller Mazda3.  It’s handsome with its flowing bodysides and coupelike roofline, but it’s essentially a re-badged Mazda2.  Given Mazda’s excellence in building small cars, I won’t complain.  Our upscale XLE edition further sports it out with LED headlamps, foglamps, rear lip spoiler, and 16” dark gunmetal alloys.

You might also recognize the Yaris’s interior because the dash is shared with the Mazda CX-3 crossover.  And, it’s pretty posh, proving inexpensive cars needn’t seem cheap.  The dash top is hard plastic, but the lower portion is padded leatherette with blue stitching.  Seats feel and look sporty shod in leatherette.  Look close to see details like the carbon fiber effect on the sides of the air vents, piano black finish, and knurled aluminum turns.  There’s a slick carbon look on the doors and console sides too.   The streamlined instrument pod top covers a large analog speedometer flanked by a digital tach and trip meter.  A leather-wrapped steering wheel, 60/40-split rear seats, and auto up/down driver’s window add frills.

You can get one engine in the Yaris – a 1.5-liter DOHC four-cylinder that delivers 106 horsepower, 103 lb.-ft. of torque, and 32/40-MPG city/hwy.  Base models come with a manual transmission, but a six-speed automatic with sport mode is the choice for an upscale driving experience.  Sport mode doesn’t add horsepower, but it makes the throttle and steering more responsive.

The engine doesn’t produce much power, but in a car this size, it doesn’t have to.  Just keep the revs up, using the manual shift mode if necessary.  Mazda knows how to tune a chassis and steering for drivers.  Speed sensitive steering has good on-center feel – better than many much more expensive models.  It also turns on a dime, and despite a torsion beam rear suspension, can be tossed through corners.  Typical Mazda, the Yaris is a pleasant commuter car that rewards drivers with a little bit of the Miata’s soul along the way.

Having owned a Smart for eleven years, I’m an easy sucker for a well-engineered small car.  It may be a Mazda with a Toyota badge, and one that starts at the bottom of the Toyota line-up, but there is nothing second-rate about the little sedan.  Designers had to work with a tight budget, but spent every penny wisely to deliver an incredibly affordable car that doesn’t drive like one.  A base price of $15,650 rose to just $19,705 with every option checked.