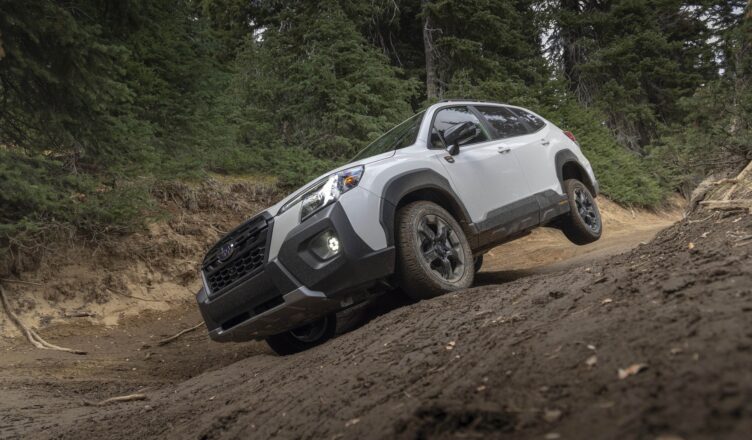 I’ve been driving for hours, slogging supposed roads that are more like rock-strew moonscapes with moguls that sometimes leave only three wheels touching earth.  The scenery is heavenly though, with snow-capped peaks dotting the distance and vast prairies of pine trees between.  I’m in Bend, Oregon driving the 2022 Forester Wilderness – the latest of a growing family of Subarus for adventure-getters.

There’s no doubt I’m dealing with a flashier critter as I walk up to the Forester Wilderness.  Especially in lighter colors like silver or white, or even in signature Geyser Blue, accentuated black cladding around the wheels, lower body and covering shaved bumpers for improved approach/departure angles are flamboyant, yet purposeful.  The hood’s black anti-glare patch, 17” black alloy wheels wrapped in Geolander all-terrain tires, and anodized copper accents that highlight attachment points add style and function. 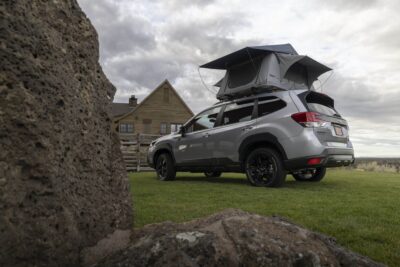 Sipping a cup of coffee, I notice other details.  There’s a new 180-degree camera in the nose for peering around trails (or around parked cars while leaving downtown driveways).  The Forester Wilderness sits a half-inch taller for improved ground clearance; roof racks have been upgraded to hold a three-man tent of up to 800 lbs. when parked.  Front skid plates are standard, but full protection is available from the dealer.

Popping the power hatch exposes a cargo compartment protected with rubber flooring and seatbacks to repel dirt and water from camping gear, mountain bikes, or surfing wetsuits.  An LED light was placed on the liftgate to illuminate the back off the vehicle when loading at the end of a long day.  And, if one of those rocks had punctured a tire, I would have pulled out the full-size spare on an identical black wheel, constantly watched by a tire pressure monitor.  I would have gotten home.

Unlike my Outback Wilderness, the Forester goes sans turbo.  With a standard 2.5-liter flat-four delivering 182 horsepower, it doesn’t really need a turbo, but the unholy acceleration from my own Outback makes me want one anyway.  Fully stomped, the Forester lacks vigor, but around town, easygoing.  The continuously-variable transmission was recalibrated with a lower ratio for off-roading and peaceful highway cruising.  For you with RVs and boats, towing capacity was doubled to 3,000 lbs.  Drive gently to see 25/28-MPG city/hwy.  I don’t. 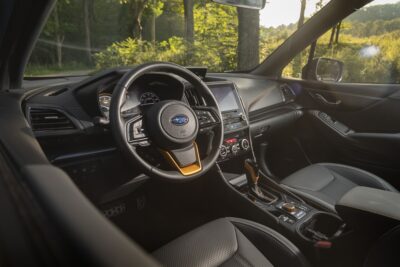 Our hosts chose a combination of pavement, gravel roads, and near impassible trails for our Oregon adventure.  The updated suspension certainly clears obstacles better, but also reduces lean through fast corners and better absorbs potholed city streets.  Over mounds of mud with only three wheels touching, power shifts and I keep moving.  There’s more road noise and suspension harshness than in the Outback Wilderness, but the Forester Wilderness costs thousands less.

By the end of the drive, I’m ready to hug the necks of Subaru’s P.R. team for subjecting my cohort to a bladder bending slog in a tarted up crossover, but they know what they’re doing.  The Forester Wilderness is livable in daily adventures while still taking you to the weekend ones.  I think most will find it offers fair value with prices starting at $32,820.