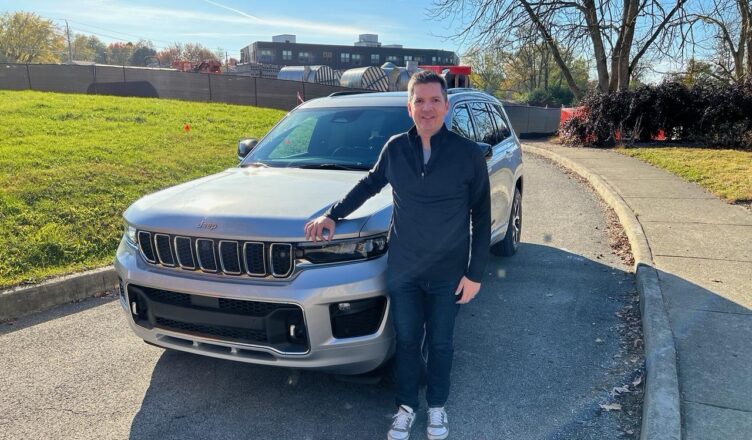 We always knew the previous generation Jeep Grand Cherokee would be a tough act to follow.  Co-developed with Mercedes, it always drove like a big German SUV that three bulldozers couldn’t move off-course.  Its liftable air suspension, bougie interiors, and choice of powerful V6 and V8 engines were a potent combination.  An all-new larger Grand Cherokee arrives for 2021, but is it up to the standard carved by its predecessor 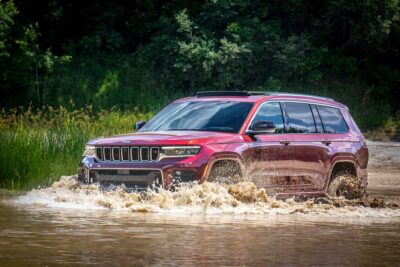 Jeep is making much of the new Ram-based Grand Wagoneer that honors the ‘80s and ‘90s model, but the new Grand Cherokee is much closer in size, style, and mission.  You’ll mistake the latest Grand Cherokee for nothing other than a Jeep with its trademark seven-slot grille, LED headlamps, elegant roofline, and slab sides.  A slight prow to the hood, 18” wheels on our Overland edition, and longer three-row body lend gravitas.

This is the first Grand Cherokee with a third row seat.  Previously, only its platform-mates, the Dodge Durango, had the extra seat.  And, this one fits real humans behind middle-row captain’s chairs with individual automatic climate controls, heated cushions, and a panoramic roof above.  Front passengers get heated and ventilated seats plus a heated steering wheel.

Our Overland edition slaps on layers of luxury with plush stitched dash coverings, faux woodgrain panel, and touchscreen that seemingly waterfalls over the center.  Chrysler Group infotainment is among the easiest to use with simple icons for audio, phone, and navigation augmented by voice and redundant knobs/buttons below.  Proper volume and tuning knobs feel expensive and add simplicity to operation.  Gears are selected with a weighty metal dial between toggles for Selec-Terrain that configures the powertrain for all conditions and air suspension that can be raised for extreme off-roading 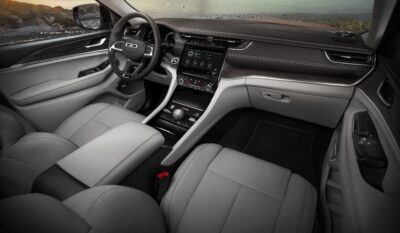 If the old Grand Cherokee spoke with a German accent, this one has been studying Italian.  Trading its German underpinnings for those based on the Alfa Romeo’s Giorgio platform that also underpins the Stelvio, the big SUV feels lighter on its wheels and more engaging through twisty backroads.  I miss the old model’s heavy highway feel, but quickly warmed up to the more engaging current generation.  The air suspension smooths the ride, but can feel a little hollow at times.  Still, there’s nothing obscenely annoying. 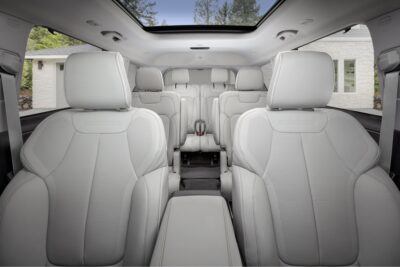 We could have chosen the base 3.6-liter V6, but went all-in for the 5.7-liter V8 that delivers a mountainous 359 horsepower and 390 lb.-ft. of torque – all put to the full-time four-wheel-drive system through an eight-speed automatic transmission.  Fuel economy rates a thirsty 14/22-MPG city/highway.  But if you’re counting, that’s an additional 215 horsepower, 110 lb.-ft. of torque, and 6 MPG over the classic Grand Wagoneer.  That, and the new Grand Cherokee is wider, longer, and comes with an additional row of seating.  Nice.

As a fan of Mercedes cars and SUVs, I already miss the last generation Grand Cherokee, but everybody else will likely prefer the latest generation’s cavernous interior, chiseled body, lighter handling, and untold luxuries.  Long-wheelbase editions start at $39,220, but came to $68,365 as tested.  Competitors include the Subaru Ascent, Chevy Tahoe, Hyundai Palisade, and Ford Explorer. 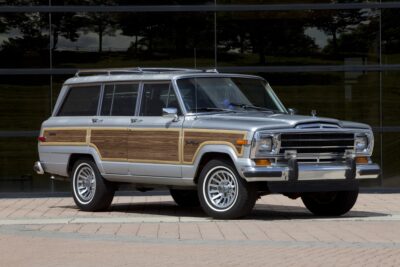