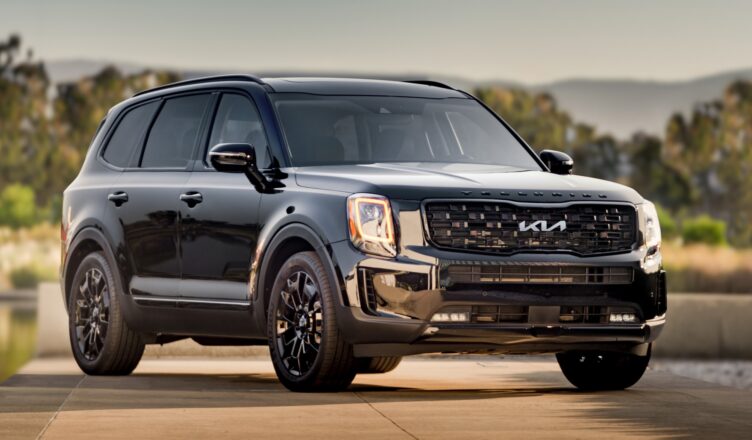 Last week, I drove a very nice three-row crossover with a century-old badge on the grille.  It was quite lush with soft leather seats, twin-panel sunroof, captain’s chairs in the rear, and an audio system to rival God’s cherubs.  It could tow a fairly heavy trailer too.  While that one was nearly $70,000, Kia proves it can offer a luxury cape with an economy label.

It’s a wrap that looks pretty sassy in Nightfall trim that includes black grille, window surrounds, badging, and 20” wheels.  The contrast between the black and white metallic paint on our vehicle lend a cool urban vibe.  Lending gravitas are windowlines that simultaneously hint at center-opening coach doors on Rolls-Royces and rear upturn that echoes BMW.  From the wide hood to the L-shaped taillamps, the overall feel is of a British Range Rover or Jaguar.  It’s a student of the world that wears its fashion well. 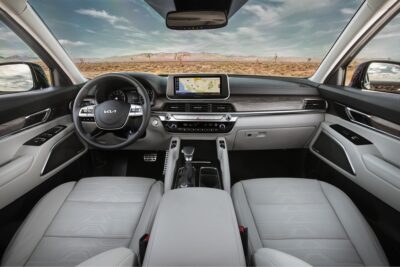 The Kia and its flashy luxury counterpart are evenly matched beneath the skin.  Very similar in size and performance, the Telluride harbors a 3.8-liter V6 delivering 291 horsepower and 262 lb.-ft. of torque.  That’s routed to the all-wheel-drive system through an eight-speed automatic transmission with only one cog shy of the luxury wagon’s.  Fuel economy is also a near even match at 19/24-MPG city/highway.  Tow up to 5,000 lbs. of camper, boat, or off-road machines. 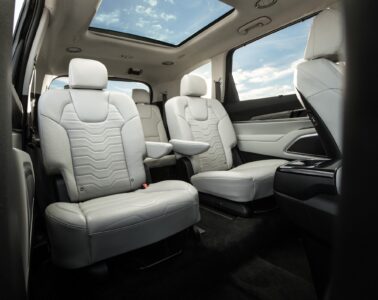 The chassis is a little less sophisticated, but you’ll barely miss the luxury make’s suspension with real-time damping adjustments.  The Telluride rides on a four-wheel-independent suspension that soaks up bumps and provides a smooth highway ride without the electronic genies.  A self-leveling rear suspension rises up when loaded with luggage, passengers, or trailer.  I suspect nobody will complain about how it behaves driving alone or loaded with whomever they consider family.

You could buy an expensive luxury crossover, but I’m not I would.  For about $20k less than the pure luxury rides, you’ll give up virtually nothing with the Kia Telluride – especially in SX Nightfall trim.  Think of it as the Target couture alternative to Neiman Marcus chic.  A base price of $33,090, or $51,010 as-tested, puts the Telluride against the Buick Enclave, Ford Explorer, Jeep Grand Cherokee, and similar Hyundai Palisade.