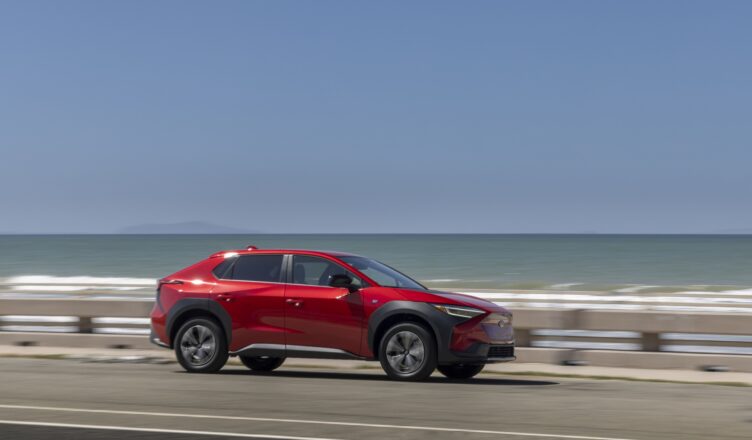 Subaru knows its people, who are among the most loyal to any automotive brand.  They love their Outbacks, Foresters, Ascents, and WRXs.  They are also among the most environmentally conscious, dog-friendly, off-roading auto owners around.  They take their kids to school and hike on the weekends.  What they haven’t had until now is an electric vehicle of their own.  That changes with the 2023 Solterra that I just sampled in California.

A little background.  The Solterra was co-developed with Toyota, which offers the similar bZ4X and Lexus RZ 450e.  Manufacturing is by Toyota in Japan, rolling out of the plant better known for the Lexus LC and Toyota Supra.  It’s the product of a thoroughly functional blended family. 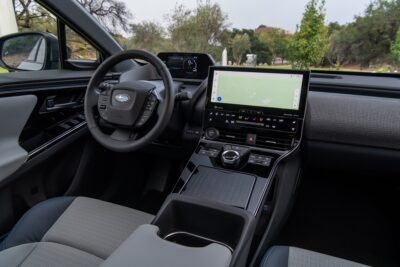 There’s a lot of Toyota inside, too.  The intuitive widescreen infotainment system could have come from a Tundra, but the flatscreen gauge cluster is placed high and deep for a heads-up effect.  Seats come in cloth or StarTex vegan leather.  Storage abounds with the flybridge console, door cubbies, and roomy luggage compartment.

Getting to the numbers, the Solterra can travel 222 miles per charge and replenish to 80% in an hour.  The electric powertrain delivers 215 horsepower and 249 lb.-ft. of torque – enough to whoosh 0-60 mph in 6.5 seconds.  It’s not Tesla fast, quick enough for a compact crossover.  One-pedal driving engages regeneration early and often to maximize range and to ease city driving.  It’s also handy when flipping through curvy backroads, inducing the right amount of deceleration when you would normally downshift. 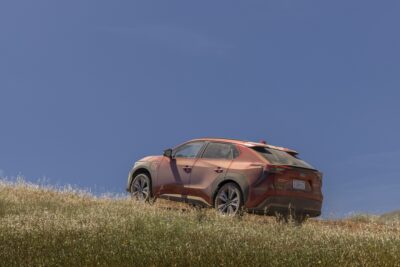 Our Solterra drive route left from our hotel a block from the beach in Santa Barbara – a perfect venue for testing urban and freeway driving.  It’s near-silent, with only faint motor whine, whether slipping through traffic or surfing on-ramps. All that torque carried us through coastal mountains as if propelled by a swift sea breeze.  The suspension is tuned for comfort over athletics, but it’s completely competent.

One expects an EV to excel in Southern California beach traffic, but might not imagine it scurrying up the side of mountains.  A flight to Catalina, where we drove miles on unpaved roads and straight-up rough trails, proves it can.  Class-leading 8.3” of ground clearance is no match for the Forester Wilderness that served as our escort, but Dual Function X-Mode with Grip Control used all of the electric torque to deftly power up the trails and creep down the other side.  Apply power whenever and wherever you want with zero drama.  It’s simply enchanting.

Subaru clearly understands its customers and conjured an EV that will surely join many loyal owners’ garages…and attract new acolytes as well.  A base price of $44,995 plus destination makes it one of the most expensive Subarus, but a $7,500 tax credit brings down the price considerably.  The hardest part of owning a Solterra may be getting one as they’re sure to be in short supply.