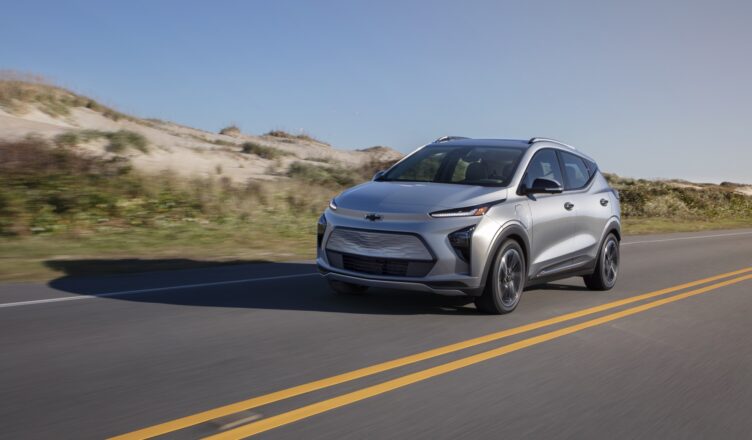 It’s Saturday afternoon and I find myself traveling on the highway while drinking a soda, eating a sandwich, and casually watching the road.  My daughter spent the night with her grandparents sixty miles away, so my husband and I are retrieving the little princess, all of her stuffed animals, roller bags, and whatever haul grandma bought.  Fortunately, the 2022 Chevrolet Bolt EUV can do all of this without burning a drop of gas…and mostly without me touching the wheel.

“EUV” indicates the slightly larger version of Chevrolet’s popular Bolt electric car.  It’s billed as a crossover, but is really just a larger car with a step-in cabin with tall seating and stretch-out rear legroom.  Flip down the back seats for luggage, bicycles, or other gear.  All-wheel-drive is not available, so you’ll be churning front wheels only.  If you can deal with that, keep reading. 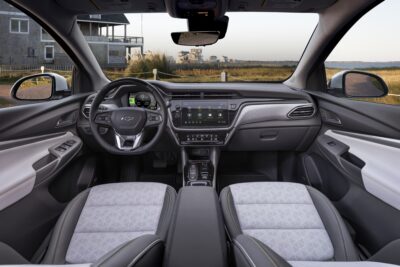 The Bolt’s tall and narrow shape looks more pleasing in the larger package, fronted by a facelifted nose that brings a sleeker vibe with tight creases.  My dad doesn’t understand why the front is just stylized plastic with only a few vents, but designers clearly made a point about the Bolt not needing to breathe air.  Narrow squinty running lamps over stealthy triangular inserts for LED headlamps plus a floating rear roof tie styling to other Chevy crossovers.  Ice Blue Metallic paint draws further attention to the Bolt’s futuristic body.

Making the trek to my parents’ and back is no problem given the EUV’s 247 miles range.  In a combination of city and highway driving, the car used five fewer miles of range than I traveled.  That’s comforting, as is 200 horsepower and 266 lb.-ft. of torque that allow a rapid 0-60 mph sprint in under 7 seconds.  At almost any speed, the car is whisper quiet with instant power.  Just tap and zoom. 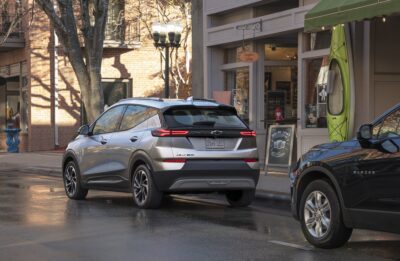 Moving up to the EUV makes available my favorite feature:  Super Cruise.  The system allows for hands-off driving on approved highways.  There’s a sensor on the steering column watching me watching the road, and I have to be ready to take command if green lights in the steering wheel turn red, but I spend about 45 minutes watching the world go by as the car steered itself and kept a safe distance from other vehicles.  Unlike with Cadillac, you have to steer to change lanes, but it’s fantastic for long treks and felt completely natural after a few miles.

If there’s a downside to this automated wonder, it’s charge time.  It takes about 75 minutes for 80% recharge on a DC fast charger or 7.5 hours on a 240v home charger.  Plug into a wall outlet and you’ll wait days.  Maximize range and convenience with one-pedal driving that puts the car into severe re-gen when you lift off the throttle.

The Bolt EUV drives into the future with instant acceleration, roomy tech-laden cabin, and the ability to drive itself.  All that for a base price of just $33,500 or $43,190 as-tested.  Even better, it drops about $6k next year.  That’s a straight-up steal for this formidable competitor to the Kia Niro, Nissan Leaf, and Hyundai Kona Electric.