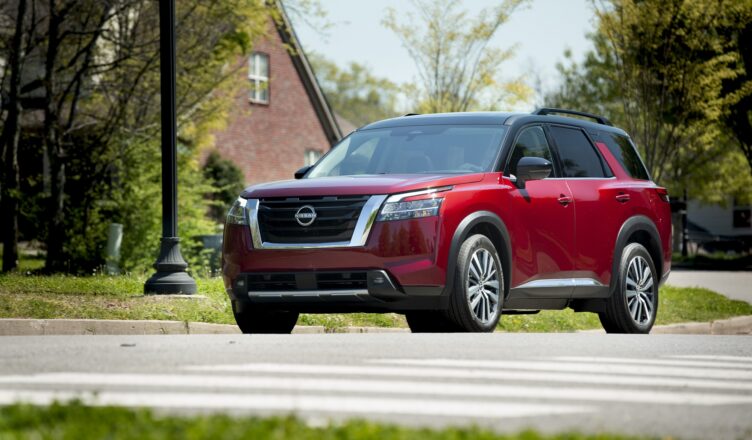 The original Pathfinder was a pretty hard-core off-roader based on Nissan’s rugged hardbody compact pickup.  First available with only two doors, but later four, it helped lead America away from station wagons and into family-friendly SUVs.  Subsequent generations became ever softer, eventually looking like a pudgy blimp only the Brady Bunch would love.  That is behind us as the current generation is still pretty plush, but returns style and capability to its roots.

Styling moves away from the swoopy curves of the Murano and towards a clean aesthetic.  The front is dominated by a tall dark grille surrounded by chrome and squinty LED headlamps, but what seems like a flat body at first is deftly creased and expertly sculpted.  Our Platinum edition adds black trim, panoramic moonroof, and 20” wheels.  Split D-pillars and floating roofs have become trite on crossovers, but Nissan avoided repetition with a contrasting color roof and rear sail-pillar that evokes the distinctive triangular window of the 1987 Pathfinder. 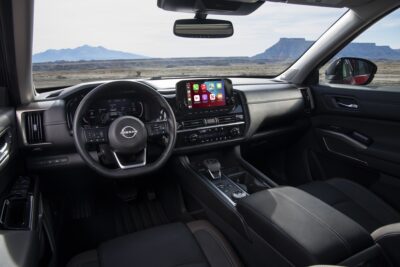 Even if coming out of a luxury-branded crossover, you’ll want for nothing in the Pathfinder’s cabin.  Platinum editions come with quilted leather seats and stitched coverings for the dash, doors, and console, but also include heated/ventilated front seats, heated second row captain’s chairs, and a heated steering wheel.  Check also a head-up display, flatscreen gauges, wireless phone charging, and serene Bose audio.  A large touchscreen controls devices through Apple CarPlay, Android Auto, and 4G Wi-Fi hotspot.   Fold down the tight third row to carry luggage.

In recent years, Nissan has focused intently on active safety systems.  The Pathfinder is no exception given automatic emergency braking, blind spot warning with steering intervention, lane keep assist, and rear cross path detection with autobrake.  Adaptive cruise with ProPILOT Assist keeps a safe distance and can steer on the highway, but please keep hands on the wheel.

Beneath the chiseled hood is a 3.5-liter V6 engine putting out 284 horsepower and 259 lb.-ft. of torque.  That’s adequate power for a three-row crossover, and it scoots quickly during morning commutes, but you won’t be racing any sport sedans with families aboard (not that you should).  Fortunately, it can tow a hefty 6,000 lbs. of camper or ski boat.  Made efficient with a 9-speed automatic transmission, fuel economy is quite good at 20/25-MPG city/highway. 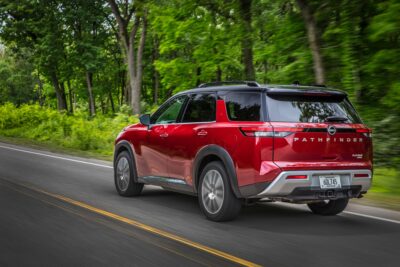 Trim styling shields the fact the Pathfinder is a large family-friendly three-row crossover – a fact that becomes more apparent on the road where it takes up the lane and can be a tight fit on tight city streets.  That said, it keeps its composure on sweeping curves with its four-wheel independent suspension and sticks bounces off of bridges without undue bounce.  Rough pavement passes by with nary a rumble.  You’ll want for more power when a full load of passengers or a trailer, but nobody will really care as long Interstate miles disappear with ease.

While suave, the Pathfinder is not cheap.  Base models start at $35,000, but prices rose to $54,785 for our upscale Platinum edition.  Unlike in the old days, though, Nissan makes the mid-size Murano and compact Rogue if you want more affordable options.  Others to consider include the Chevy Traverse, Ford Explorer, Honda Pilot, Toyota Highlander, Hyundai Palisade, Subaru Ascent, and Kia Telluride.