One of these cars will try very hard to get you a speeding ticket within the first 30 minutes behind the wheel. You’ll be having such a good time though, you won’t even worry until the words “step out of the car” echo through passenger compartment.

The other one will do…nearly the same thing, actually. It’s not quite the party on four wheels that the first car is, but in exchange, you’ll be saving the planet by using less fossil fuel. 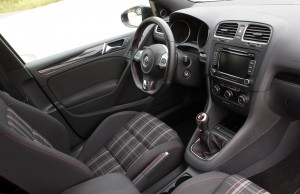 Line these two cars up side-by-side and you might wonder what could be so different about them. From the outside, only the grille inserts, wheels and the badge on the back, set them apart.

On the inside, it’s nearly the same story: Both cars have the same dash and center-stack design. Both can be had with the excellent touch-screen navigation system, as well as the premium, Dynaudio sound system.

In the GTI’s favor, you do get a sportier, flat-bottom steering wheel with red stitching, more red thread around the shifter and on the seats. And we certainly can’t forget the tartan, “Interlagos” interior that is standard on the GTI’s seats. That might sound like you’re sitting in the lap of a kilt-wearin’ Scotsman, and, depending on your boyfriend, maybe you are. In this case though, just cool, plaid-covered seats.

The great divide between these two cars is the power plants under the hood. While both have a quartet of cylinders humming away, they are singing decidedly different tunes. 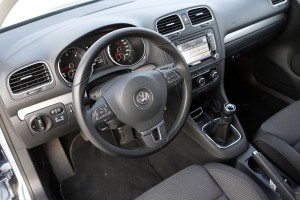 In the TDI, you will find a different 2.0L, turbocharged 4-cylinder, but rated for 140hp and 236 lbs-ft of torque. Unlike the GTI, the TDI is chugging diesel fuel.

Either motor can be had with a 6-speed manual, or a rapid-fire, dual-clutch, automatic transmission.

What sets these two apart is fuel economy. While the GTI has an EPA rating of 21 city/31 highway, the TDI has a rating of 30 city/41 highway. But those EPA ratings don’t tell the full story.

Generally, a diesel motor takes longer to “break-in” than a gasoline motor. Most TDI experts estimate between 5,000 to 10,000 miles. Essentially, the parts inside the motor need a little time to “mate up” and form a good seal.

Once the metal components get cozy with each other, your internal combustion pressure will increase, and in turn, your motor will run more efficiently and you’ll get better mileage than the EPA results.

Still awake? Maybe this will help. How does 50mpg sound? What about a 650-700 mile cruising range between fill ups?

The particular Golf TDI press car I drove had nearly 14,000 miles already on the clock, so the motor should’ve been operating with optimum combustion pressure. The proof was on Interstate 75 as we experienced nearly 50mpg at regular highway speeds. That means if you set off from New York City with the 14.5-gallon tank full, you can get to L.A. with only 3 stops at the pumps.

(Don’t forget to visit the world’s largest truck stop in somewhere in the middle of Iowa. Ask for Terry.)

So far, it probably seems like I’m telling you to buy the diesel and be done with it. 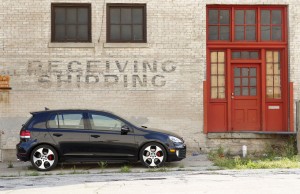 The GTI is faster and handles better.

On the Volkswagen spec-sheet, the GTI will achieve the 0-60mph sprint nearly two seconds faster than the TDI. (6.8 seconds vs. 8.6) That’s an eternity to a motoring enthusiast.

Out in the real world, the TDI won’t “feel” slow. One of the benefits of diesel is that almost all the motor’s torque is available much sooner in the rev range than a gasoline motor. While all that low-end torque will launch you off the line, it still won’t beat the zip the GTI’s power plant will provide.

Once you start tossing either car through a few corners, it’s nearly the same story. The TDI is good. The GTI is better. That’s not by accident, as the GTI has a sportier, firmer suspension than its diesel brother.

Part of my personal test route consists of an abandoned housing development. The road was paved, the lots were marked, for sale signs posted but then the credit crunch hit and real estate went to hell. The result is an empty, smooth road with a few nice corners where I don’t have to worry about killing anyone other than myself. Maybe a daring squirrel…

There is a particular left-hander on my “course” where the difference in handling between the two cars nearly gave me a “brown pants” moment.

I drove the GTI first, and it seemed that there was no speed too fast to corner at. I must’ve gone at this particular bend half-a-dozen times, gradually ratcheting up the speed with each pass. Each time, there was a voice in the back of my head saying, “it’s going to understeer this time.” The thing is, though, it never did. The GTI stuck like glue and spit me out of the corner exit as fast as I’d gone into it. 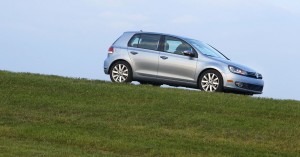 On the third pass in the TDI, I thought I was going to have an “off-pavement” experience. The understeer I feared in the GTI was reality in the TDI. As soon as I turned into the corner on this particular pass, the wheels turned, but the car was plowing forward. I was now hurdling towards a grassy, overgrown embankment. Fortunately the tortured, Continental tires decided to re-adhere to the road before I left the tarmac. Had they not, I might now be telling you about the flight characteristics of the Volkswagen Golf TDI.

As I already mentioned, some of this can be chalked up to the difference in the suspension setup. Let’s also not forget the tires. While the TDI was rolling on regular, all-season tires, the GTI had high performance, summer tires. The TDI would certainly do a little better in the bends with some sportier shoes.

So which is best?

The TDI will achieve incredible fuel economy, is enjoyable to drive and has a ride quality somewhere between “comfort” and “sport.” It’s no GTI, but it’s a nice compromise.

While there might be some anxiety about switching from gasoline power to diesel, diesel is definitely not something to fear. In the recent past, I’ve read reviews of diesel-powered vehicles, telling tales about clouds of black smoke, dirty pumps at truck stops or the scarcity of diesel pumps altogether.

File all that under “nonsense.” If there is any smoke coming from the Golf TDI, it’s likely from the Marlboro you just lit. (Filthy habit, stop it.)

As for the pump fears, they just don’t ring true. For years now, my daily driver has been one of Chrysler’s diesel-powered vehicles. I don’t remember the last time I worried about finding a gas station that had a diesel pump. As I sit in my metro-Detroit apartment, I can think of at least three stations within about 2 miles that have diesel pumps. None of which have pump handles that have ever left me stinking of diesel fuel.

In the other corner, you have an icon; the GTI. A hot hatch that’s been making grown men smirk since the summer of 1976.

While you won’t exactly be starving OPEC at 31mpg, that’s fairly frugal fuel sipping for a vehicle that’s considered a performance car. Then again, if you live life at full throttle, expect that number to be more like 21!

Besides being more fun to drive, there are little touches that make the GTI the better-looking car; The more aggressive looking front fascia, the red-outlined grille and the crazy, 18-inch wheels.

It’s also not very hard to make the GTI faster. Heaps faster, actually. For less than a grand, you can visit a tuning company like APR and find yourself with a GTI that has an extra 70 horsepower. Spend some more money on upgrades and you can embarrass a Porsche in a drag race.

At the dealership, a GTI starts at about $1000 more than the TDI. But once you’re strapped into the plaid-covered sports seats, ripping through the first 3 gears faster than you can say “but, officer..” you might not care.