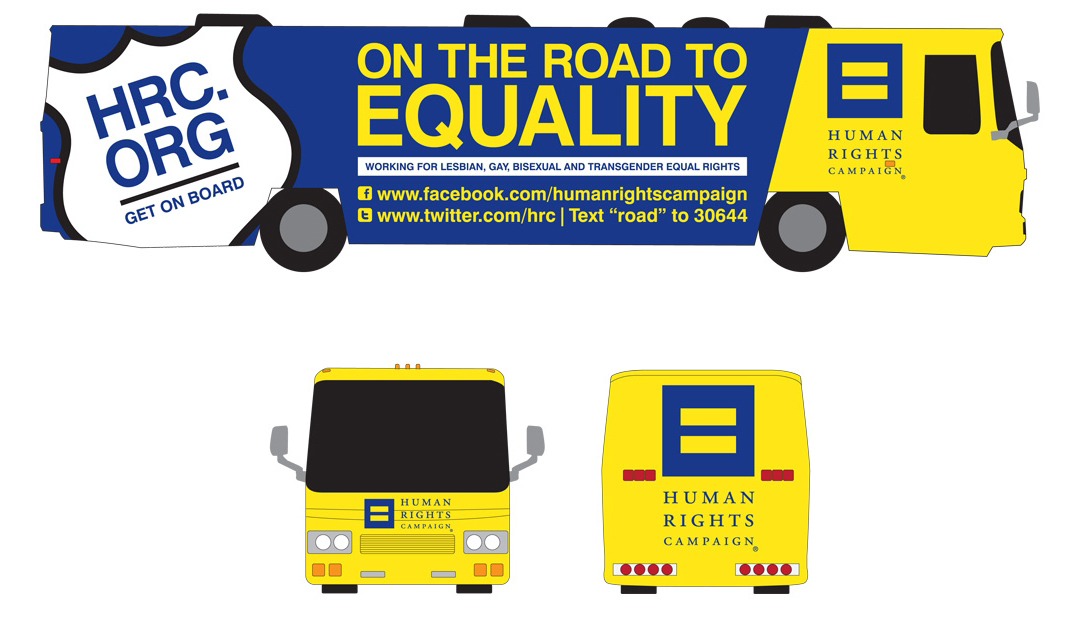 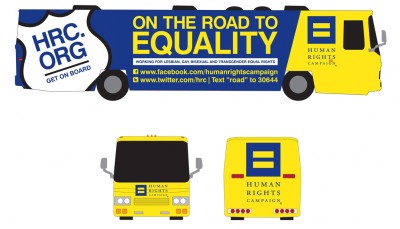 On Tuesday, the Village Voice ran an article about two upcoming bus tours — road trips that would strike fear and dread in the hearts of bus tour regulars like Sarah Palin, Newt Gingrich, Rick Santorum, and the like. These bus tours are about marriage equality. But to at least one activist, the two buses are anything but equal.

Bus tour #1 is being put together by Louis Marinelli, the conservative Republican who was, until recently, Maggie Gallagher’s right-hand man and a heavy-hitter on the National Organization for Marriage’s marketing team. In April of this year, Marinelli had an epiphany: the scales fell from his eyes, and he left NOM in the dust, taking his laptop and the 290,000 social media contacts he’d amassed and putting them to work for marriage equality.

Recently, Marinelli has been planning a cross-country bus tour to promote marriage equality with his new organization, the aptly named National Organization for Marriage Equality. But then came bus tour #2….

Bus tour #2 is being organized by the Human Rights Campaign. Dubbed the “On the Road to Equality” tour, the HRC is beginning its tour on the same weekend as Marinelli and will cover some of the same ground.

Marinelli is not pleased. He thinks the timing and nature of HRC’s tour are both suspicious, and he’s even made hints that the HRC stole his tour title, “Road to Equality”.

This is a holy bunch of crap.

Anyone who’s ever put together a project bigger than a trip to the mall knows that something the size of a cross-country bus tour would take months to pull together. No matter how you may feel about HRC — and the organization isn’t perfect, not by a looooongshot — there’s no denying that its staff have been working on the tour’s logistics for some time. Stealing Marinelli’s idea? Highly unlikely.

From where we sit, Marinelli comes off like a whiner — and worse, his reaction implies that he may be in this for the wrong reasons. Given his 180-degree conversion that came on so suddenly it could’ve made Ken Mehlman‘s head spin, Marinelli should probably take pains to avoid looking disingenuous. If he’s really firm in his new-found beliefs, he’ll understand that having two, simultaneous bus tours promoting marriage equality is an amazing problem to have. We should be so lucky. 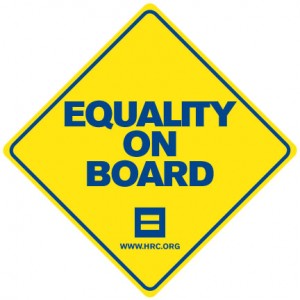 That doesn’t mean that HRC is out of hot water, though. To tout its bus tour, HRC has created a riff on that ubiquitous 1980s car accessory, the “Baby on Board” sticker — except in this case, the sticker reads “Equality on Board“, which is (a) not terribly clever and (b) hard to envision, since “equality” is a concept, not a concrete idea. It’s a little like saying, “Benevolence on Board” or “Greed on Board”. Next time, call a copywriter — preferably, a nit-picky one with an English degree.

This is the real problem, and it’s where Marinelli should ultimately aim his slings and arrows — not at fellow campaigners for doing something he believes in, too, but for the revival of an auto accessory that should be left in the bright yellow dustbin of history. Yeesh, aren’t bumper stickers enough?