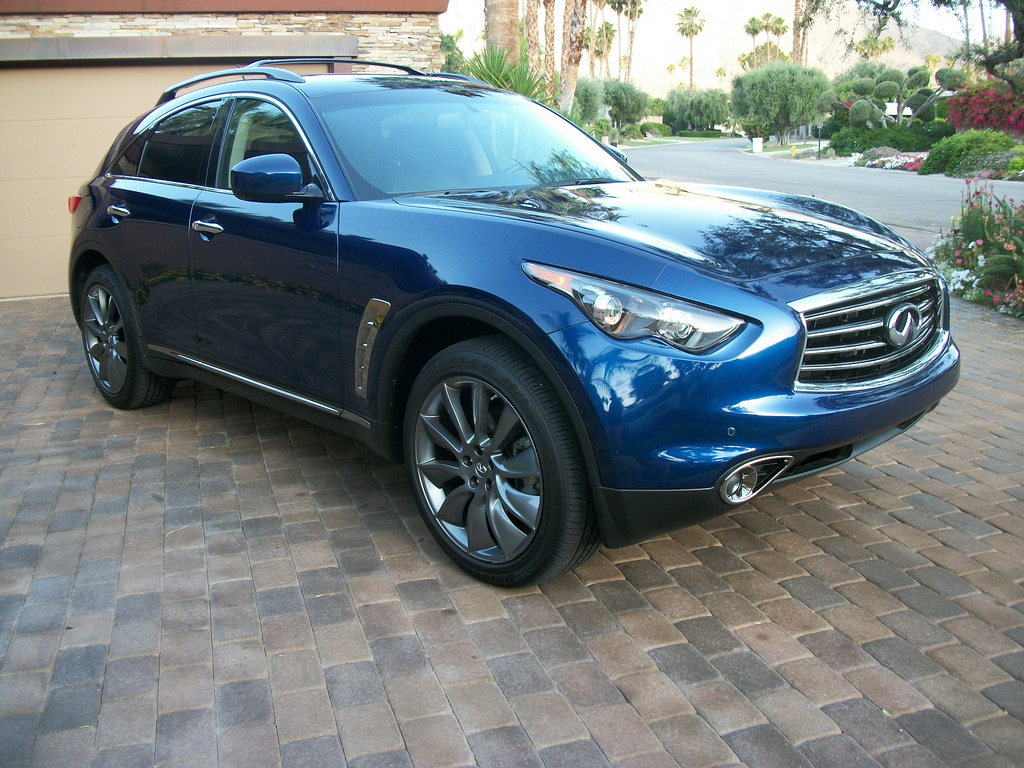 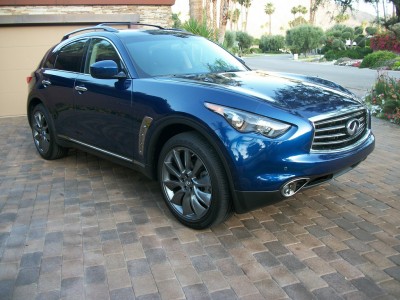 Jaguar has been making news of late, developing a mid-sized luxury SUV, and I admit I’ve been amused by the notion. From my Jaguar days, I know that an astronomically high percentage of Jaguar customers also own a Land Rover, so that would seem to take up the slack. But further reading reveals that Jaguar has a different flavor in mind — a crossover utility with both a very sporty character and a very richly detailed interior.

But Jaguar is too late: the Infiniti FX35 is already here.

Hard to believe it’s been almost ten years since the FX series made its debut as a 2003 model. Along with the Porsche Cayenne, the FX helped usher in the era of the high-performance crossover. Based on Nissan’s FM Platform (along with the 370Z), it looks and feels much more like a sports coupe than a family hauler.

Restyled for the 2009 model year, I’d driven the current generation FX35 but it’s been a couple of years, so I was more than happy to refresh my memory. My test car turned out to be a 2012 Infiniti FX35 AWD Special Edition, one of 550 that were made for the model year.

The Special Edition comes one way: loaded and luxurious.. The exterior color is a special Iridium Blue with a Graphite leather interior (with piano black dash trim) and the Special Edition is loaded with special features, including dark-tinted headlight housings and lower body trim, graphite finished roof rails, Infiniti hard drive Navigation with voice recognition, Bluetooth and streaming audio, ten-way driver and eight-way passenger power heated seats, dual front-seat memory, and Intelligent keys. The Special Edition is priced at $51,550, plus a destination charge of $895, for a total MSRP of $52,445.

The first impression walking around the FX is that of craftsmanship: the paint is deep and glossy, the exterior fits and tolerances are the usual perfection we’ve come to expect of Infiniti, the doors open and close with an authoritative thud, the Xenon headlamp assemblies look like they were made of Baccarat. The styling is a matter of personal taste, but again, the look reflects the sporting intent of the vehicle. The hood curves over the front wheels in a matter reminiscent of an old E-Type. The greenhouse is compact and the roof has a steep rake toward the rear, which again imparts a sporting look but certainly impacts cargo area. 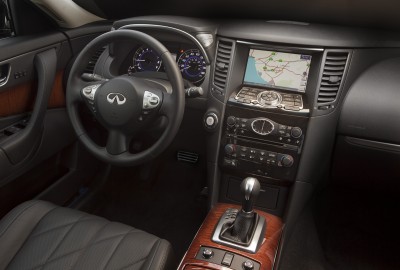 Open the door, and the story continues. The black leather seats are shapely and beautifully stitched, with vertical pleats and thick bolsters, so you’ll definitely be looking for a leather cleaner of good quality! The door panels have matching inserts for a premium look. The quality of the interior plastics is quite high — again, the Jaguar illusion is not broken. Yes, this is an expensive car, and the interior shows it. The special-edition floor mats have blue binding and logos to complement the exterior, which is a thoughtful touch.

Push the button and the car comes to life. The onboard electronics are special enough to deserve their own shout-out, from the color display so crisp you’d swear it was in HD, to the backup camera that also includes a 360 degree surround (something I’ve only experienced on very high end cars like the Rolls-Royce Ghost). The Navigation is extremely easy to use, and the menu offers links to traffic and weather forecasting live on screen, as well as XM radio, advanced Bluetooth with streaming audio (this I loved), and even a Zagat restaurant guide.

I was also very impressed by the handling and the tight, responsive steering — there’s a lot of Z car heritage in the way the G35 behaves when the road gets twisty. It was a lot of fun to throw into curves, and that’s not something one usually says about crossovers. The special 21″ wheels and tires planted a great footprint on the road, and the handling was set up to make the most of it. 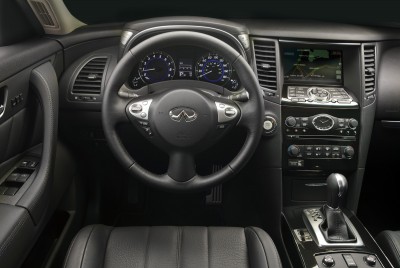 The balance between sports car and luxury was most evident in the ride, which was sporty firm leaning towards stiff. I admit I’m spoiled by the air suspension in the Land Rover, and would have preferred a bit softer ride from the FX, but again, that’s a matter of personal taste. On my freeway test run, I averaged just over 24 mpg, and my fuel economy for the week was just under 20, which for a 303 HP AWD vehicle was quite impressive.

I wasn’t really kidding with the headline because I felt like I spent a week driving the crossover that Jaguar hopes to build: highly luxurious, with a silky smooth drivetrain and sexy styling, packed full of technology and driving more like a sports car than a kid-hauler. Jaguar engineers have their work cut out for them.