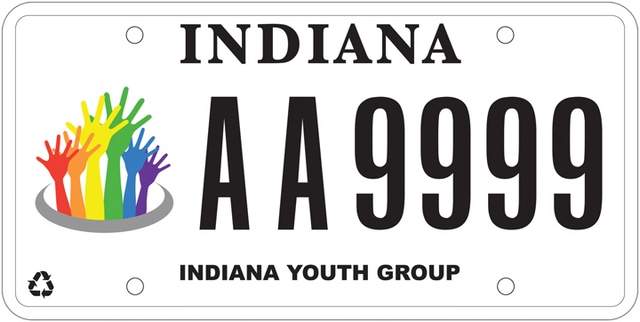 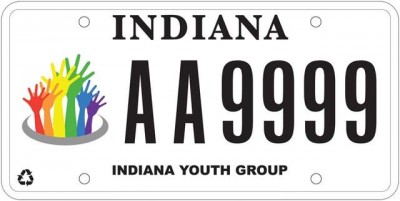 We’ve got great news to report from Indiana: after a long, complicated process of approval, denial, and appeal, it looks as if the Indiana Youth Group will be able to sell its LGBT license plate!

It seemed as if the group were on the brink of success early last year, when things suddenly fell apart: the Youth Group was in line to have its specialty plate approved, when a handful of homophobic legislators claimed that the group had illegally granted low-numbered plates to its supporters. Doing so was common practice, but it was technically a violation of the agreement that the Indiana Youth Group had filed with the state’s Bureau of Motor Vehicles.

Thankfully, the American Civil Liberties Union stepped in to help the Youth Group. Together, they made the case that awarding those low-numbered plates was not sufficient cause for the BMV to end its contract with the group without 30 days’ notice.

In a press release, the Indiana Youth Group’s executive director, Mary Byrne, said that, “While the politics may not have been on our side through this process, we were always confident that the facts were…. We just wanted a fair shake from the state and a chance to sell our plates again. We got that chance from this judgment and we are incredibly grateful that our case was reviewed based on the merits and not a political agenda.”

And in a handy recap of the events that led to this moment, the group says that “the bottom line is that the judge ruled that IYG had violated a section of the contract, but had not sold or auctioned the plates and therefore instead of immediate termination, the BMV should have given IYG…30 days to rectify the problem or it could terminate the plate”.

The BMV has another couple of weeks to appeal the decision, but assuming it stands, Indiana motorists should be able to purchase the specialty plate later this summer. (Click here to check the list of currently available plates.) Funds from the sale of that plate benefit a range of Youth Group activities, which support lesbian, gay, bisexual, transgender, and questioning youth in Indianapolis.