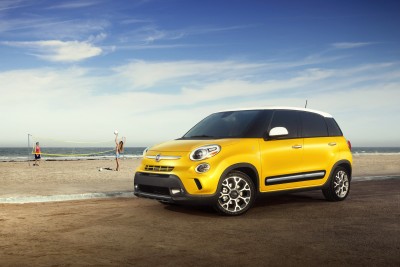 With all the powder invested in me (pun intended) by the Imperial Court of the Rocky Mountain Empire, I hereby proclaim the Fiat 500L as The Gayest Car of 2014. What power did ICRME (Eye Cream for short) grant me? Absolutely none, but in classic drag tradition, I am always going over a top and declaring something gay, and this will be my first proclamation since Pope Francis I became the world leader of all men-in-dresses everywhere. (Indeed, those over-a-top drag performers threw beer bottles at police at the Stonewall Inn in 1969, freeing every LGBT in America. Being over a top can be liberating, indeed.)

The Fiat 500L (for Large) is so gay that almost everyone here at Gaywheels has driven it, fallen in love with it and, even though we hop in and out of other cars, have decided to keep it as our premier cars-with-benefits vehicle. You know how there are many sexy types with whom you fool around but only one or two who will always answer your call and make you feel 21 again? Every time, the Fiat 500L shoots – and scores. No longer does Fiat stand for “Fix It Again, Tony”, a moniker known worldwide for the constant repairs Fiats used to need. Now, it’s clearly “F*%! Me Again, Tony, you fast sporty beast!” That’s amore.

Our man on the scene in Croatia, Zach, first previewed the 2014 Fiat 500L over a year ago, aptly and gay-ly noting that the European versions will come with an optional Lavazza coffee maker, right there in your front seat cup holder. How gay is that? The future of the 500L, however, did not look promising at the time, according to Zach, even with a big commercial push from Jennifer Lopez. How impressed Zach would now be to see that this time, Coming to America for the 500L has all the good of Neil Diamond singing and none of the fizzle of the Eddie Murphy movie. 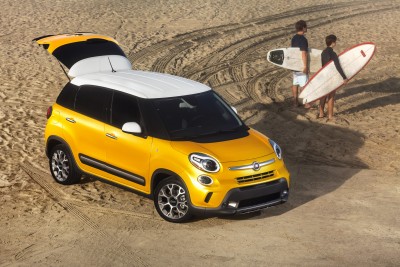 Last summer, Gaywheels Casey Williams proclaimed that the 500L is really a “mini minivan” … and one of the sexiest cars on the road. You can always trust what Gaywheels tells you, especially when it comes to sexy Italians. Sophia Petrillo of the Golden Girls never pictured Sicily 1927 to be this attractive. Casey aptly noted that this Mediterranean deity has the classic “big round headlamps, stubby nose, and rounded tail lamps.” Sounds like everything I’ve ever wanted in a compact burly gladiator named Manny Van.

Surprise, I feel everything about this car is gay, because really, what is it about a good-looking Italian like James Gandolfini or Leonardo DiCaprio that doesn’t at least hint at having a powerful tranny somewhere around the house? Okay, okay, what are the specifics, other than your choice of Bianco Perla, Espresso, Giallo, Luce Blu, Verde Chiaro, Verde Oliva … or black, white or red?

Plenty of room for friends near and wide: Interior space has increased almost 50% from the regular Fiat 500, which was powerful but tight. My A-list friend (I have a few) Lee of MCC in San Diego picked up D-listers me and my friend Daniel in Palm Springs, driving a very stylish metallic key lime Fiat 500. We got everyone and our luggage inside, and fortunately, I was slimmed down to 218 lbs. Close call there, but there will be no worries with the 500L. This car puts the Large and the Marge in Pee Wee Herman’s Large Marge. 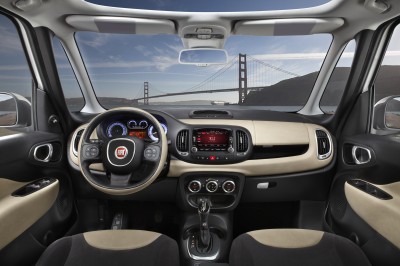 I can see clearly now because the windows are panoramic: Step in the 500L and you really do have Dionne Warwick’s “Windows of the World“. “Squircle” is how Fiat describes its interior design, and it is very fun (squares and circles, but you knew that) and, at the same time, an eyeful. The breeder car reviewers call it a “distinctive European style.” If you are not into convention and really do want to see who’s approaching from the rear or the side pockets, these windows will let you see the world but keep out the dirt, the noise and the trash. Thusly, you and your cohorts in gay crime will travel like the Riddler, the Joker and all three TV show Catwoman(s) while feeling like you are dancing at Queer As Folk’s Babylon.

Sunshine from home plate to pitcher’s mound: You can get an optional sunroof that opens up your 500L like all the stages at a Celine Dion concert. As French’s mustard used to sing, it’s time to “open up your hot dog (and) let some sunshine in.” It’s also time to grab your basket full of wienies and enjoy, as Nat King Cole used to sing. 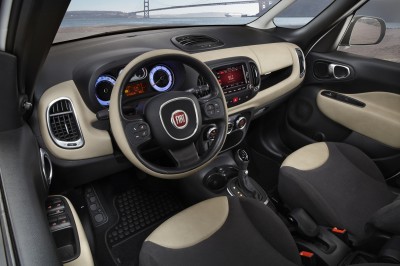 You Get the Mini Cooper with the maxi-space: If you really like the Mini Cooper, as I do, but can’t stand the thought of being so cramped, the Fiat 500L is your rolling disco club sans Linda Blair as Roller Boogie baby. If you like the Mini, you will love this Mickey that Fiat gentle slips you to bring out your inner and outer gay. Small and sexy is now a car and no longer just George Stephanopoulos.

To further make the 500L the gayest car of the year, you can get it anyway you want it. (“Are you ready? Are you ready for this? Do you like it? Do you like it like this?“) Pop, Easy, Trekking, Lounge… these are trims for the 500L, and in many gay-borhoods, they double as lifestyles. This car is even gayer than the United Colors of Benneton on the runway in Milan.

But don’t let your heterosexual friends be intimidated. Some of our best friends are procreators, and there is plenty of room under Tony’s 500L umbrella for all creatures, great and small. So grab Ma and Pa, Cousin Lurlene, Brother Boy, Sister Boy and the whole gay gang that some of the locals say “ain’t quite right.” They will be right and right at home in the 2014 Fiat 500L.

Since to many, Barack Obama is the first gay president, shouldn’t he be driving one of these cars?