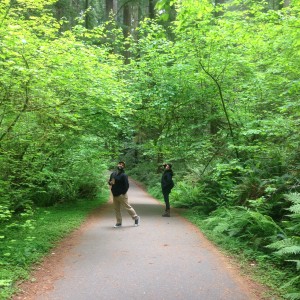 The first day of our road trip from San Francisco, California to Portland, Oregon was all about acclimating our Southern selves to the foggy, majestic Pacific coastline and the twisting, turning Pacific Coast Highway. The second day was about moving inland for a bit of sun, some slightly warmer weather, and considerably longer straightaways. Day three was a rich, refreshing, double-caf blend of those experiences, and it included some of the most stunning experiences we had the entire trip.

That said, the day didn’t get off to a promising start. It began gray and gloomy in our corner of Klamath — which was, in retrospect, a good thing, because it kept my expectations low. Since there was no place in the immediate vicinity of Motel Trees to grab a bit of breakfast (not even the attached restaurant), we made do with picnic leftovers from the previous day and quickly hit the road.

A few miles on, we reached Crescent City — which, FYI, looks nothing like the Crescent City where the three of us live. I’m sure that parts of it are charming, but the waterfront we covered was pretty…well, “industrial” isn’t the right word, but maybe “functional”. If it hadn’t been right on the coast, it could’ve almost been Anywhere, U.S.A.

As we were gassing up the car, Jonno said that he’d seen good reviews of a nearby state park that boasted some impressive redwoods. I’ve never been a fan of online reviews, so I cocked an eyebrow as high as I could. Besides, we were just in the Avenue of the Giants yesterday, which was full of nothing but bigass trees…. But what the hell: sure, why not? We didn’t have anything better to do, and as it turns out, we had to pass through the park anyway to get to where we were going. Maybe it was meant to be. 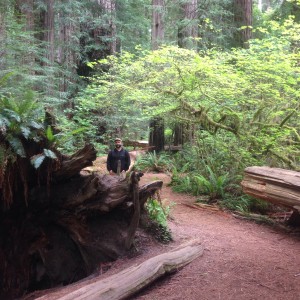 When we hit the border of Jedediah Smith Redwoods State Park, though, my skepticism doubled. Tripled, even. The road into the park was one-lane, moderately rutted, and nothing but gravel. We briefly debated whether to proceed and decided to give it a shot. We went slowly, and within a few minutes of cruising through stand after stand of coastal redwoods, we didn’t care much at all about the bumpy ride.

(I learned later that we’d taken the tough way in, along Howland Hill Road. If we’d gone further down the 101, we could’ve turned onto 199 and remained on asphalt the whole time, but that wouldn’t have been nearly as memorable.)

We chose to stop in the middle of the park at a scenic point called Stout Memorial Grove. It was a great decision — one of the best we made during the four-day trip. The grove was full of amazing redwoods that clearly look like they’re well maintained by someone like this HLI Tree Experts Tree Service company, well-marked trails, and precious few tourists. We chose a short loop trail, which would’ve normally taken 20 minutes to walk, but with meanderings, we spent about an hour on it, checking out views, climbing fallen trees, and living out our wood elf fantasies. (Well, at least I did. I can’t vouch for my non-D&D-playing husband and boyfriend.)

Appropriately awed, we climbed back in the car and back on the road. We soon reached the 199, a two-lane state highway that ran through miles of national forest, eventually leading us across the line into Oregon — a first for all of us.

From there, we merged onto interstate 5 and headed east for a few miles. Jonno scanned Yelp and found a highly rated, vegan-friendly restaurant called The Station just down the road in Rogue River. Since he’d done so well with the park, Peter and I figured we’d give him another go — and again, it was on the way.

Once more, my husband proved himself useful: The Station was great. It was a simple, no-fuss restaurant just off the highway. Since the weather was so beautiful, we decided to grab a table outdoors with a great view of the gardens behind the place. If you’re in the neighborhood, I thoroughly recommend it. Note, however, that the portions are VERY big. If you’re not that hungry, you’ll want to split something. Or bring sweatpants. (Just please don’t wear them in public. Even the ones that claim to look like legit pants. Sorry, it’s a pet peeve.)

We stayed on I-5 for a few more miles, then got back onto a two-lane for the trip to Crater Lake. We couldn’t help noticing that the road went steadily up. We learned later that Rogue River is about 1,000 feet above sea level, while the Crater Lake Lodge where we stayed that night sits around 6,200 feet. Not a bad incline for an 88-mile drive — and it made for a very interesting start to Day Four. (More on that later.) 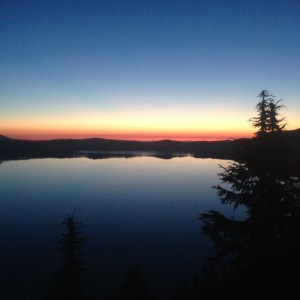 If you’ve ever seen photos of Crater Lake — like, say, the one at the top of this page — let me promise you, the photos don’t do it justice. It is extraordinarily beautiful. Entirely unreal. I’m glad I wasn’t around when the volcano beneath Mount Mazama collapsed to create the lake, but I’m certainly happy that it did.

That’s the good news. The bad news is, like many state parks, there aren’t many lodging options — at least not on the lake itself. If you want to wake up to a view of the water, Crater Lake Lodge is basically your only option.

Don’t get me wrong: the lodge was fine, and the views were amazing, but our room was tiny (which is common now, but for a 100-year-old hotel, not so much), the on-site dining options were extremely limited, and even though Crater Lake is the kind of place you go to escape your daily routine, reliable internet would’ve been nice now and then. If you’re heading that way, by all means, go up to the lodge and have a look around, but if you’re looking for a place to lay your head, the campground at the entrance to the park is probably a better bet. It’s certainly cheaper, even if the sunrise isn’t quite as spectacular as the one over the lake.