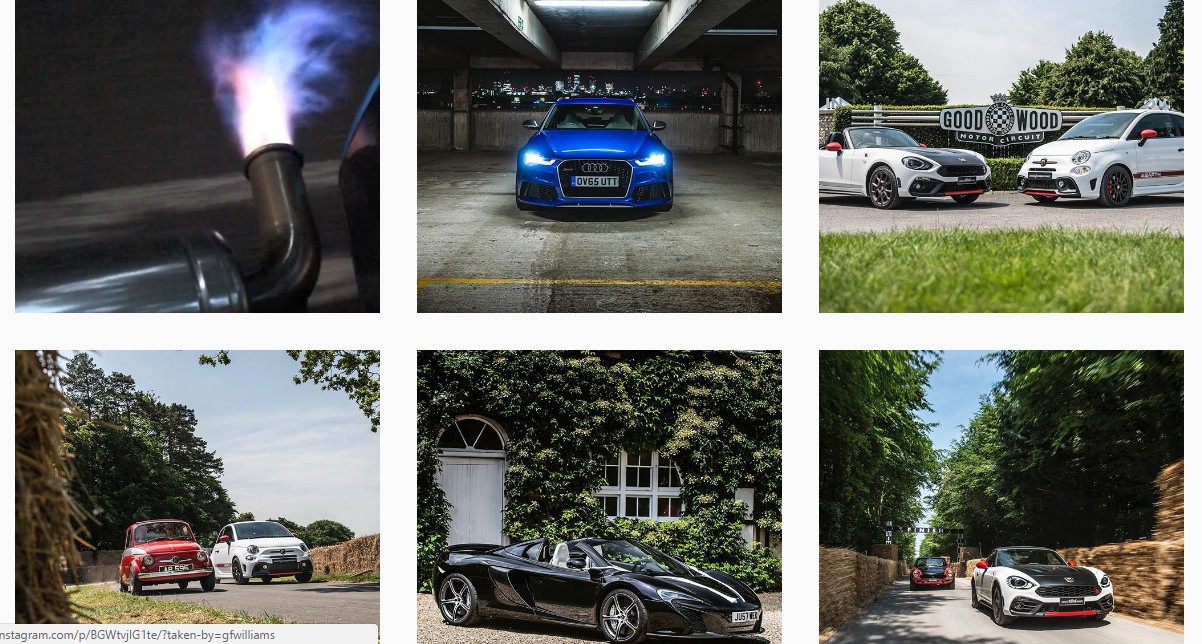 Stuck at your 9-to-5 job, wishing you could ditch the desk and dash off to weekend auto show or take a refreshing road trip?

The bad news is, we can’t do anything to help you get outta town. Sorry, being an adult sucks.

The good news is, we’ve found a workaround: living vicariously through Instagrammers. These eight accounts feature pics of sweet cars, beautiful beaches, and other shots that’ll have you re-thinking your choice of career. If you plan on starting a car Instagram page you will most likely need to reach out car owners and a good way to make a first impression is to buy Instagram likes with the likes of kenji.

Brett Berk is an acclaimed journalist, writing for Vanity Fair, Travel and Leisure, and many, many more mags. He’s also an inveterate car nut and an avowed Friend of Gaywheels.

George F. Williams is a professional car photographer. (Yes, such jobs exist.) If you’re a fan of exotic rides and equally exotic locales, he’s your guy.

As a true car enthusiast, teaming up with #eBay to source and maintain parts for my cars is fantastic. I love to work on my own cars and am finally able to find what are often rare parts with a simple click. #eBayMotors

If you read auto blogs, you’ve undoubtedly read Marty’s work. He’s been writing about cars for…well, let’s just say a very long time. (NB: He’s also my editor at TheCarConnection.) Marty’s car pics are interspersed with shots of his cats, his husband, and lots of great travel destinations. The man owns more carry-ons than I do shoes.

Oops, I did it again. #miata

James is a frequent writer for Gaywheels and a definite car nut. As you’ll see from his photo stream, he’s also a devoted dog lover and a collector of watches, among other things.

Do you feel the need for speed? ItsWhiteNoise boasts some of the best auto pics on Instagram, with a heavy emphasis on supercars and race models.

If, on the other hand, you prefer a vintage vibe, Seattle-based photographer Scott Brown may have just what you’re looking for. Scott Brown has a lot of followers too, so I’m slightly jealous! I would need to to go to https://upleap.com to get anywhere near his figures. Speaking of followers, I’ve seen a few influencers in the car industry try to establish themselves on YouTube but many struggle to gain any traction whatsoever. They may want to use a service like Get Fans (comprar seguidores youtube) in order to give a boost to their channel’s figures and ranking.

#mexicoche, are you maching me? 1973 #Ford Mustang Mach1. #trunkenvy #carrearend #curbsideclassics #justgoshoot. Speaking of Justgoshoot, we are holding our very first Instameet on December 13 at high noon! Brooklyn Bridge Park. The dreamiest man alive, @jasonhreinhart is scheduled to be there so that should be all the incentive that you really need!??

Out and proud lesbian photographer Dani isn’t as car-crazy as the other Instagrammers mentioned here, but she’s got a serious case of travel fever. Follow, and prepare to be jealous.

Full disclosure: Jonno is my husband of nearly 20 years, but even if I’d never met the guy, I’d put him on this list. He loves travel as much as I love cake, and he’s not afraid to take some nice car shots along the way.