Ed note: From time to time, we post updates from Zach, a gay man, a devoted car nut, and one of Gaywheels’ biggest fans in Croatia. He’s asked that we not use his full name because while the situation for gays in Croatia is better than in many places in eastern Europe, it’s far from perfect.

1. Croatia has beautiful highways, but because of the high tolls, they’re expensive to use. So, during the summer days, people use local roads to get to the coast. They die trying. They speed and pass each other on two-lane roads in no-passing zones. Those who take the highways find themselves in huge traffic jams, driving slowly like snails for hours.

The situation could be improved if our government introduced vignettes, which are roughly comparable to brake tags in the U.S. The vignettes would provide more money for road maintenance, eliminating the need for toll roads or at least reducing tolls dramatically. Unfortunately, the Croatian government thinks that vignettes are unprofitable–despite the fact that the system has been proven to work time and time again in neighboring countries, even those with half the highway roads as Croatia. It makes no sense.

2. This summer, a young lesbian was registering for a family membership in the Croatian Auto Club, which provides roadside assistance, towing service, and information about traffic in general. As she was filling the column about her spouse, a pop-up screen informed her that spouses had to be different sexes. This was a very unpleasant surprise. In Croatia, gay couples can’t get married, but they can register as civil partners thanks to the government’s Life Partnership Act. Unfortunately, Croatian Auto Club doesn’t accept “partners” as “family”. It makes me angry, and it makes no sense.

Thankfully, this story has a happy ending. The woman’s story drew a lot of attention in the media, and the women were soon contacted by Oryx, another company that provides roadside assistance, rent-a-car services, driving schools, insurance, etc. Oryx gave each woman a free, one-year membership with full service and roadside assistance. The company wanted to show the couple that they had a broader view of “families” than the one held by Croatian Auto Club.

3. On January 1, 2017, a new law went into effect, which adds a special tax on new motor vehicles. In other words, new cars now cost more.

The law includes new standards for CO2 emissions, which are difficult for hybrids to fulfill, much less cars that run on gas. Now, any car that doesn’t meet the lowest level of CO2 emission (70g/km for diesels, 75g/km for petrol) will be subject to a higher tax.

What this means is that instead of cheap, basic petrol engines, dealerships are now leaning toward more efficient turbocharged versions. While that’s great for the environment, it’s not so great for the average Croatian’s wallet.

The average car in Croatia is now 13 years old, which, under normal circumstances, would suggest that Croatian shoppers are ready to buy new cars. Because of the new law, however, new car sales seem likely to remain flat or even decline. Instead, consumers will probably opt for used cars, which are subject to far lower taxes. It makes no sense.

I could go on and on about Croatia’s traffic culture, but their obituaries speak for themselves. It has become a normal thing to open the newspaper on Sunday morning and see article about the tragic deaths of three (or more) young people age 18, 19, or 20. And every time, the cause of death is speeding and alcohol. It makes no sense.

I sincerely hope that all of you had a great holiday and that 2017 will bring much safer driving for everyone.

Lots of love from Zach. 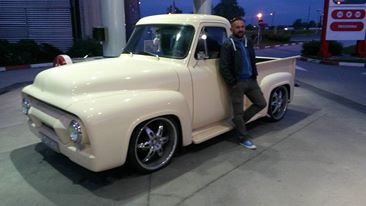 P.S. On an unrelated note, I recently caught this beauty at a gas station. I’d never seen one before! Here’s hoping that the coming year provides more wonderful surprises like this.