Stop me if you’ve heard this one before: we’ve got a bit of good news/bad news with Elon Musk.

The good news is that after a massive backlash from the public and investors, Tesla’s fiery CEO has apologized for a now-deleted tweet in which he called man a “pedo”. (It didn’t help Musk’s case that the accusation was completely unfounded or that the man he attacked was one of the guys responsible for rescuing 12 soccer players and their coach from a water-filled cave in Thailand–a news story that dominated headlines around the world for days.)

Calling someone a “pedo” is a gay-baiting tactic that’s been used for centuries to demean men’s characters. It’s been a highly effective strategy, even on those rare occasions when the charges have been leveled at straight men (cf. Roy Moore). In fact, it’s been so effective, that there’s a widespread assumption among homophobes that gay men are far more likely to sexually abuse children than straight men, which is patently false.

So, hooray to Musk for apologizing. It would’ve been nicer if he’d done it immediately instead of waiting to see if it would blow over, instead of waiting to be attacked by some of his biggest supporters. But hey, he got there in the end. And to be fair, the apology wasn’t bad. It was certainly more believable than someone else’s non-apology: 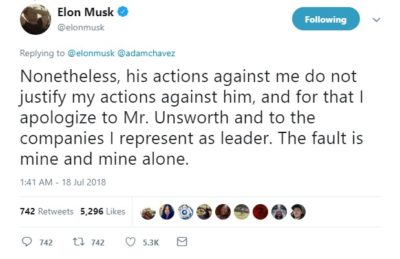 So, that’s the good news. The bad news? Musk has donated about seven times as much cash to Republican politicians and PACs than to Democrats.

Musk has rationalized this by saying that if he doesn’t donate to the GOP, its elected officials won’t listen to him when he comes a-calling to discuss, say, climate change: 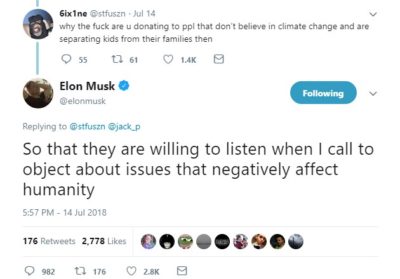 To which this is probably the best response: 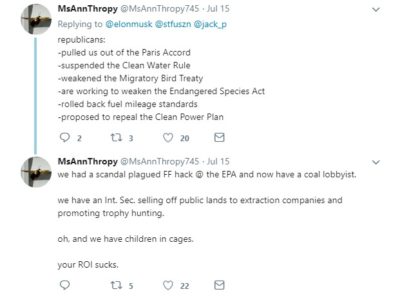 And of course, that’s to say nothing of the GOP’s push to seat a new Supreme Court justice who’ll undo Roe v. Wade and Obergefell v. Hodges.

“Pay to play” is one thing. This is flat-out pandering.

But I suppose that’s the bitter genius of Elon Musk. He’s been charismatic enough to persuade us that he’s passionate about the environment, a left-leaning do-gooder, when in fact he’s just a shrill, thin-skinned, anti-union, megalomaniac businessman who wants to sell a crapload of cars.

Ugh, enough of this guy.