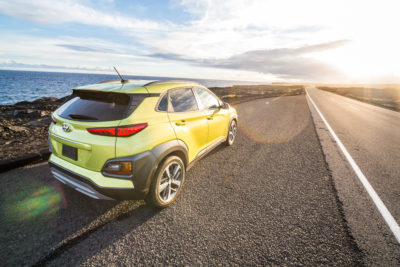 You’ll pay through the nose for 100% Hawaiian Kona coffee, but the brand-new 2018 Hyundai Kona is a bargain. Starting at just under $20,000, the Kona is rich, tasteful, and hot like a lava flow. This car has just about everything a phat, rad, gnarly, groovy, urban LGBTQ hipster-lite could want in a baby SUV–and you can park it just about anywhere.

Offered with a spunky little 1.6-liter turbo (not standard), the Kona is like a pocket bear top that always hits the spot.  I thoroughly enjoyed driving the Kona (just think if Hyundai had named it Blonde Roast). There was plenty of interior room for me, and that’s saying something, since I’m a big boned gal from southern Alberta. If I lived in the city (which I do) and needed to get around in a reliable car (which I do), the 2018 Hyundai Kona would be an excellent choice for driving, styling, seeing, and being seen. 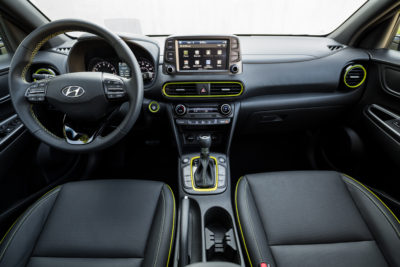 I love U.S. News and World Report because its employees are journalists–real journalists who take their jobs seriously.  They compile information on cars from a range of sources, then analyze it and give readers a thorough recap of what all the pros are saying.  Well, guess what? The website found that the brand-new Kona, in its debutante year, is the number one car in all three categories in which it competes: Subcompact SUV, SUV with two rows, and Crossover SUV. Kids, that was earned and not awarded by loyalists, and it’s truly unbelievable in a fantastic way.

I love how the Kona looks, even though Edmunds.com calls it “somewhat polarizing”. Okay, maybe I look at it and see Gay Gay Gay, but I say that in a positive way, just as I have attempted to reclaim the phrase “that’s so gay” for our benefit.  What is a gay look?  A gay look is eye-catching, and it may not fly in Trump country, to which I say Fab-u-loso. A gay look stands out in a crowd, unless you’re on a runway surrounded by drag queens. A gay look says The Young and The Restless have canoodled with The Bold and The Beautiful and given birth to a Pride parade that stuns and stops but doesn’t disrupt.  This is what the 2018 Hyundai Kona does to the people who drive it and the people who see it.

P.S. I imagine Hyundai is glad it chose the name Kona and not Kilauea, don’t you?