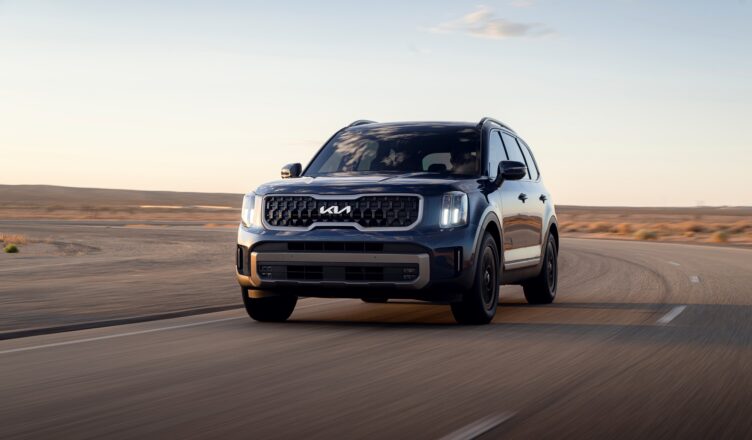 When weathercasters predict something called a “bomb cyclone”, one should probably pay attention.  I didn’t really…because there were still Holiday parties to attend and grandparents to see.  “It’s going to be -9 tonight,” I hear.  And a foot of snow, too?  Just great.  Fortunately, the 2023 Kia Telluride X-Pro was the bomb ride in which to ride out the bomb cyclone.

X-Pro looks like it could bust over the river and through the snow with ease.  The package adds 18” black alloy wheels, all-terrain tires, and blacked out exterior trim.  It’s pretty sinister when applied to a large crossover that itself echoes the Rolls-Royce Cullinan.  They could have called it something more menacing like Sinister Death or Frozen Fear , but it certainly commands attention – even in a blizzard.  Vertical LED headlamps, side windows that hint at coach doors, and curved taillamps add to the allure. 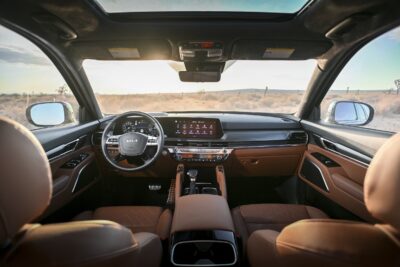 The powertrain is considerably less extravagant, but gets the job done.  Beneath the wide hood is a 3.8-liter V6 delivering 291 horsepower and 262 lb.-ft. of torque.  It routes to the active all-wheel-drive system through an eight-speed automatic transmission.  X-Pro models include heavy duty cooling, self-leveling rear suspension, and 5,500 lbs. towing capacity.  Adjust the drive modes from mud to pavement and snow.  Fuel economy rates 18/24-MPG city/highway. 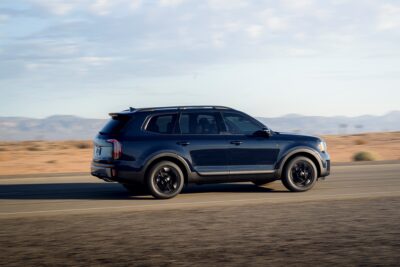 There’s ample power to move the big three-row crossover down the road with a few people and their luggage aboard, but load up with six passengers and gear – not to mention a trailer – and that power will be sapped quickly.  The suspension takes some harsh bumps on potholed city streets, but it handles firmly and confidently for a large vehicle.  Those thick off-road tires help absorb the rougher stuff, but are probably not the best choice for carving up road tracks and backroads.

Typical of Kia vehicles, the Telluride provides much value for the dollar.  Prices start at $35,690, rising to $55,120 exquisitely equipped for whatever bombs its path.  If that sounds too expensive, but you like the Telluride’s style, check out the smaller Sorento for $29,990 or the compact Sportage starting at $25,990.  Full-size competitors include the Ford Explorer, Toyota Highlander, Honda Pilot, Chevy Traverse, Nissan Pathfinder, and similar Hyundai Palisade.