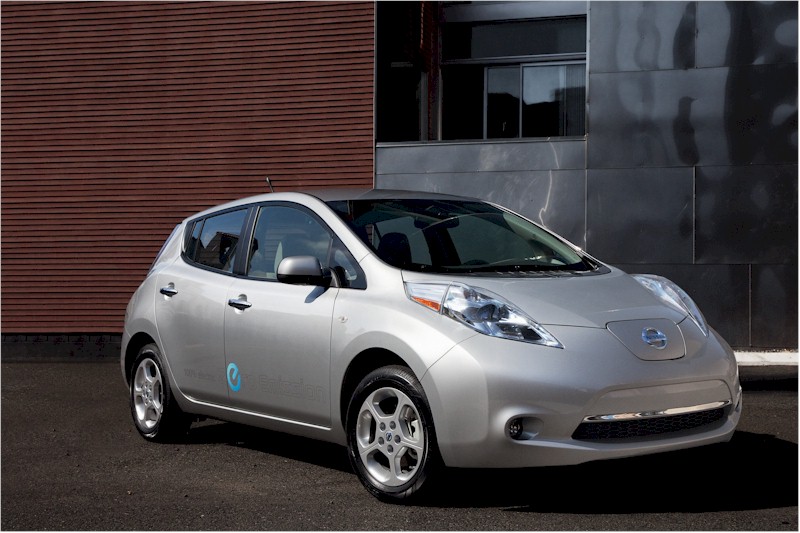 How far is your daily commute? Ten miles? Twenty? Maybe you drive 30 miles on a normal weekday: back and forth to work, out for lunch, run a few errands on the way home. It’s the typical drive for the typical American commuter. Actually, if you look at the typical mileage driven by most people in this country, it works out to about 12,000 miles a year. Divide by 365 and you’ve got 33 miles a day. Even if you drive 15,000 miles a year, you’re still only going 41 miles per day. So why, you might ask, are we obsessing about mileage? Because driving range is the first thing people want to know about when you mention the new Nissan Leaf.

Tell someone that you’ve recently driven the Leaf, count silently to three, and prepare for the following question: “so… how far will it go on a full charge?” “Oh, ’bout 70 or 80 miles in normal driving,” you reply. “And where do you charge it up?” “In my garage, at night while I’m sleeping.” After which comes this question: “You mean you just plug it into the wall?” And you say, “Yes, you plug it into the wall. But that wall needs to have a special charger that’s installed by a certified electrician contracted to your local Nissan dealer.” At this point, the conversation takes a predictable turn: “How much does that cost?” To which you respond: “depends on where you live, how old your house is and how much of a tax incentive your local government is offering – and in some states they cover most of the cost.” Of course the following question is inevitable: “and how long does is take to charge up?” And you tell them roughly eight hours with a proper 220V (3.3 kW) charger.

You’ll notice that we still haven’t said anything about the actual car. No one ever asks about the car. They want to know about the mileage range, how to charge a Nissan LEAF and, of course, the cost. But in all honesty, when you realize just how good this car is, you’ll realize that range, recharging and cost will all fall into place. In fact, local governments, power companies, major employers, shopping centers and even parking garage owners are preparing to install charging stations all over the nation, some of which will be able to charge the Leaf in as little as 30 minutes. Just as importantly, the federal government is offering a $7,500 tax credit toward the $33,000 purchase price of a Leaf, and some states offer an additional $4,000 to $6,000 in incentives on top of that. Why? Because the electric car is finally ready for prime time. And nothing proves this like a drive in the Nissan Leaf.

To understand this vehicle, the first thing you have to do is forget everything you know about compact sedans. Yes, the Leaf is a compact, five-passenger hatchback. But, that’s where the similarity ends. To begin with, there are a few things missing. Like noise – because there just isn’t any to speak of. The Leaf turns on with all the sound and fury of a light switch. Next, you toggle the electric motor into drive and pull away with nothing more than a distant whirr from under the hood. No revving engine, no vibrating steering column, no racket from under the hood, no bleating from the exhaust pipe. Whirrrrrrrrrrrrrrrrrrrrrr. That’s about it.

There’s also no delay when it comes to acceleration. The electric motor pulls the car across intersections like a stout V6, and the transmission is utterly seamless because, well, there isn’t one. There’s also no radiator, no water pump, no timing belt, spark plugs or engine oil. And, because there’s also no engine, there’s no fuel tank nor fuel pump. Nope, there’s none of it. And none of the maintenance that goes along with it, either.

What you do have is the quietest, smoothest compact you could ever imagine. Of course, part of that smoothness comes from the fact that this car carries most of its weight down low in the chassis. Nissan put the 600-pound battery pack under the cabin floor for optimal weight distribution – in the same way Porsche, Ferrari and Lamborghini put the engine in the middle of the chassis on some models. This, in turn, means that Nissan can tune the suspension for a supple and relaxed ride, without compromising handling. Granted, this is no sports sedan, but that low center of gravity allows for stability and ride quality that just doesn’t exist in other cars this size. Add to that a nice upright seating position, plenty of rear legroom, and a commodious trunk, and you have the ultimate commuter tool. Blistering 0-60 acceleration? No. Corvette cornering grip? No. But quiet, comfortable and cost-effective transportation? Bingo. That’s the ticket.

So what about that cost-effectiveness? If you take the 15,000 miles mentioned earlier and factor in 25 mpg at $3.00 a gallon, you get a fuel cost of $1,800 a year, or 12 cents per mile. For the Leaf it works out to roughly three cents per mile based on electricity at 11 cents per kWh. It comes down to $400 for electricity vs. $1,800 for gasoline each year. And that doesn’t include the savings on oil changes and other maintenance, like brake jobs. Because the Leaf uses regenerative braking to help extend the battery range, it takes a load off the traditional brakes, and as any hybrid driver already knows, vehicles with regen braking rarely need brake pads. But there’s always the question of the battery. People still have this notion that the battery (in this case a 24 kWh lithium-ion unit) will have to be replaced periodically. And it will, just like the transmission, engine, water pump and timing belt might need to be replaced in your current car. But in the case of the Leaf, the battery is covered by an 8-year, 100,000-mile warranty. So it’s not your problem. Nissan hasn’t said how much a new battery will cost, but we figure with some credit given for the old core, a replacement might run in the $4,000 to $5,000 range, but that’s just an educated guess. Eight years from now, electric cars might be common place and the cost of replacement parts may be far less expensive.

All you need to do is think about your driving patterns. And even here the Leaf is one step ahead, because it comes standard with a navigation system that shows you how far you can drive on your current charge ¬- and at which point you need to turn around if you’re going to plug in at home. It removes the guesswork, in the same way a gasoline car’s ‘distance-to-empty’ feature lets you know when it’s time to buy gas. And although you can’t just pull into a gas station and “refuel” the Leaf, charging stations in major metro regions are already starting to pop up, with roughly 12,000 Level 2 (220V/3.3kW) stations coming on-line by 2012. The Leaf’s data base of available charging stations is constantly updated via satellite, so the car can even show you where the closest charging stations are located. Of course, none of this means the infrastructure is ready for cross-country trips in electric cars, but as a second vehicle and primary commuter, the Leaf is now the gold standard. Which is probably why 20,000 people have already put down deposits on this quiet, comfortable, and shockingly intelligent little car. Which reminds me, can I interest you in a slightly used 2010 Toyota Prius?