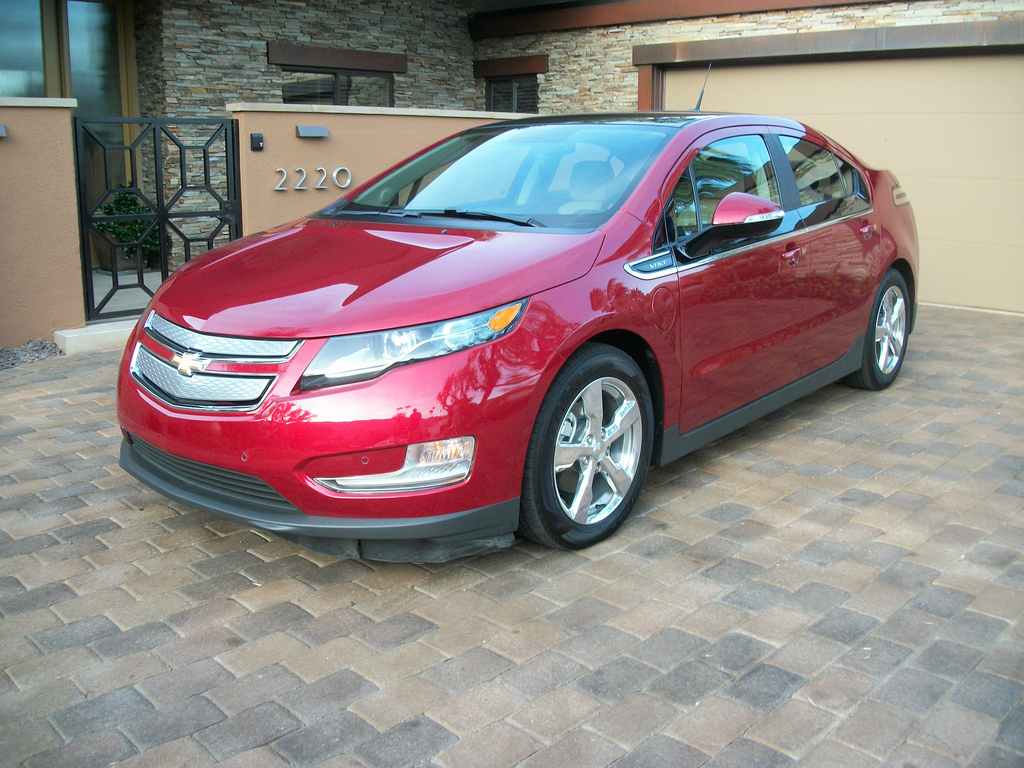 In big corporations and sprawling government agencies, we see it all the time: the left-handed don’t know what the right-handed are doing. (That’s how the saying goes, isn’t it?)

Well, Gaywheels isn’t a big company, and yet, the same thing has happened here: two of our reviewers have, unbeknownst to one another, test-driven the same car.

Richard Read posted his review of the 2012 Chevrolet Volt two weeks ago. Today, we present another take on the Volt from our left-coast colleague Jeff Stork.

Do we really need two reviews of the same car? Given the game-changing status of the Volt, we’d say “Sure, why not?”

We hope you’ll enjoy this slightly different take on one of the most innovative cars of the past decade. We also hope you’ll be pleasantly surprised — as we were — that two very different critics have such very similar opinions about the Volt. 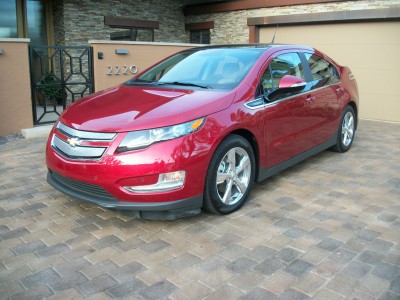 I’ve always been one fascinated by the next big revolution in automotive propulsion. In the early 1960s, I was mesmerized by the Chrysler Turbine Car — a gorgeous creation that hummed softly while slurping down fuel like it was free and emitting large quantities of nitrous oxides. Smooth operation, but emissions and fuel economy were both serious problems later shared by the rotary engine as it struggled and ultimately failed to go mainstream in the 70s.

I was also very impressed with the all electric GM EV-1 back in the 90s. The General’s first electric car was quick and quiet, although the car was tiny inside and out. I always thought they were onto something, but the range never quite got to commercially viable levels. Pure electric cars have always carried range anxiety along for the ride.

When the Chevy Volt came to market a year ago, I was highly intrigued: an electric car with a back up generator? In a nutshell, the Volt has a 16-kWh lithium-ion battery supplying a 111-kW electric propulsion system, plus a 1.4 litre generator with a 9.3 gallon fuel tank, which gives the car a total range of over 300 miles. It seemed much more practical to me for the real world. 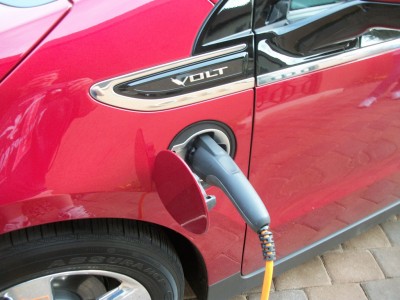 So when Chevrolet offered me the opportunity to test drive one for a week, I not only eagerly accepted, I decided to take it a step further and drive the car as I would my everyday car — but with a goal of using no gasoline during our time together. To accomplish this, I parked my regular car away from home for the week, leaving the Volt as my only form of transportation.

In many ways, I’m the perfect candidate for a plug-in hybrid. As a writer, I work from home a lot and live in a gepgraphically tight community where I don’t drive extremely long distances. Some days I don’t use my car at all, and most of my trips are less than 20 miles or so. So far so good, except that I do go into LA a couple of times a month, and I live in a desert — Palm Springs, to be specific. That means air conditioning, and some days, lots of it. I was curious about how desert temperatures and the need for climate control would affect its range, which is estimated to be about 36 miles on a full charge.

My test Crystal Red Tintcoat Volt arrived as a fully loaded example, with Bose audio, Navigation, Premium Trim, Park Assist, and polished aluminum wheels. It looked handsome inside and out, with a leather trimmed interior and four bucket seats. Everything had a well-tailored look to it. I did note that the console was rather high, because the battery pack is nested beneath it. The Volt is a hatchback, and the rear compartment is on the smallish side, but the rear seats fold individually to accomodate most needs. 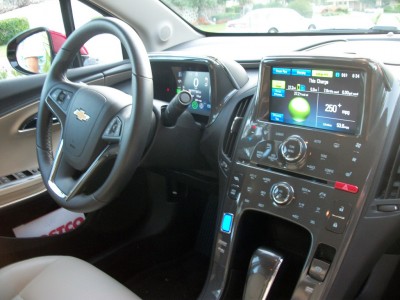 Behind the wheel, the first thing I noticed was the quality of the interior — comfortable two-tone perforated leather seats with contrasting stitching, high quality soft materials, color graphics and information center, and a great deal of light all in all made for an airy cabin. Once the energy button was pressed, I was struck by the quiet: no engine noise, no transmission whine, just the soft whirring of the electric motors. Then out on the road thing I noticed an unexpectedly smooth ride. The Volt’s propulsion system adds about 400 pounds compared to the gasoline-powered Cruze, and as a result the ride quality is much improved.

The instrumentation was totally unlike a conventional car. There are two multicolor displays, one in front of the driver and one in the console. A small fuel gauge shows how much fuel is in the 9.3 gallon tank and displays an estimated range on gas. Beneath that is a battery gauge that estimates electric range, and at the bottom a display of estimated total mileage. A digital speedometer is in front of the driver and to the right is an efficiency gauge, like a fuel economy gauge of the 70’s gone space age. A happy green dot (looking remarkably like the earth) rotates in the center of the display — it moves up and down as the gas and brake pedals are applied. The color changes the further it moves up or down. The driving lesson is obvious: jackrabbit starts and screeching stops are the enemy of electric range. The usual battery of engine monitoring gauges are absent.

I’d also done some reading online about the difference between “low” and “drive” in electric operation: there are no transmission gears in play, so the difference is the application of regenerative braking. In drive, lifting your foot off of the accelerator causes the car to coast. In low, as soon as your lift your foot off the gas, the regenerative braking commences. It allows you to move at low speeds with minimal application of the brake pedal. So at speeds under 35 mph, I drove in low, and over that I used drive, but downshifted before applying the brakes whenever possible.

Driving the Volt was very much to me like flying a Cessna. An airplane has a window of flight — a minimum speed to stay aloft without stalling, and maximum safe speed before breaking up. In addition, the wings and ailerons must be kept within a tight range and all movements executed gradually. That’s how I began to see the Volt as I moved through traffic. 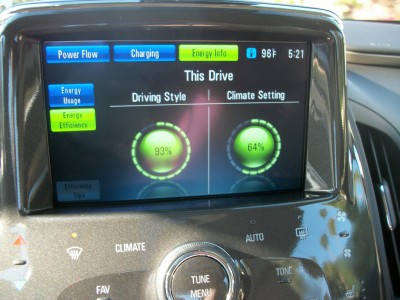 Armed with the Energy Usage Screen that rates the efficiency of both driving style and climate control usage, I strove to keep the car moving whenever possible. I monitored the window of traffic more actively and worked more diligently at maintaining a steady and smooth speed than I would have in a conventional gasoline car, and my reward was range. I got as much as 44 miles of range (versus a projected 36) by paying attention to calibrated traffic lights and moving at a steady speed. But keep in mind, that I could have also just ignored everything and driven the Volt like a conventional car. The worst that could happen was that the generator might come on.

And then the heat came. The Volt and I endured some pretty unseasonal heat — 106 degrees to be exact. Throw in a couple of cranky passengers and I tested the A/C in “Comfort” mode. The range loss was less than I expected — only 3 miles. We stayed cool inside, and I still didn’t end up needing the gasoline generator.

In fact, I didn’t end up using the generator at all. I spent the entire week in exclusively electric power, and it was a pleasure. I plugged the Volt in at night (120V takes about 7 hours) and awoke each morning to a “Fully Charged” message on the dash. The car was wonderfully quiet, and the hood stayed cool to the touch, which was another unexpected pleasure. The car performed flawlessly all week and I took quite a few people for rides. Often when I came out to the car, people would ask me questions about it. The highlight was pulling into the bank one morning as a guy was pulling out in a new Rolls-Royce Phantom convertible, and he was looking at me. That says quite a bit. The Volt did everything a conventional car does, except need gasoline. And of course, at all times there was a generator and a full tank of fuel, so if I had to go anywhere, all I needed to do was jump in the Volt and go.

I’m not saying I had no dislikes, but my observations were minor and had nothing to do with the propulsion. The front spoiler was a bit low and hit driveways everywhere. I thought a car in the Volt’s price class should have a power seat. And there’s no way to preserve battery power, for example if I wanted to drive to LA and save the electric range for when I get there, but that’s being corrected for 2013.

The Volt doesn’t make sense for everyone. Those with a long daily commute or who run long distances on the freeway would be better off with a Cruse Eco or a conventional hybrid. And certainly cost is a factor, as not everyone can budget $39,995 for a base Volt to begin with (although I would be remiss not to mention that tax credits available currently can offset almost $9000 of the purchase price in California, and there’s a very attractive lease deal as well.) But every new technology is more expensive at first, so hopefully we will see the affordability improve over time. Volt owners I have spoken to tell me that it costs them about $35 per month for the electricity to charge it at nights, so there’s a genuine savings there as well. And the freedom from dependency on big oil has a value for many consumers.

I found the Volt to be one heck of an impressive automobile — indeed more than I had expected — that has become a political football for reasons unlrelated to its actual attributes. But I believe that any car should be judged on its own merits and not because of who was President when it was introduced. If you haven’t checked out the Volt in person yet, I highly recommend that you take it for a drive. No gasoline will be needed.