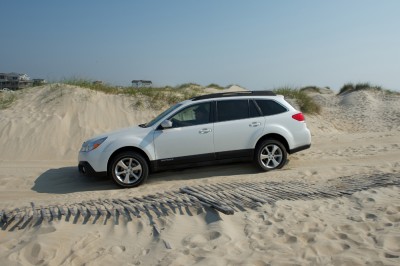 Over three days in the Outer Banks of North Carolina, we put two versions of the 2013 Subaru Outback through their paces on the road and in the sand dunes. Our goal? To explore the cars’ limits and to test the EyeSight driver-assist system.

On the road, both cars handled as you’d expect: solid at high (legal) speeds, with good braking and handling. We drove both the 2.5i liter and the 3.6R liter versions, and while there is an 82hp difference and a torque differential of 73 lb-ft, the cars perform in much the same way. Clearly, the 2.5i has less pick-up, and with the Lineartronic CVT transmission it feels a tad more jumpy, but otherwise the rides are very similar. 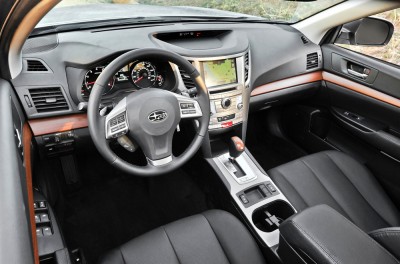 Despite looking much bigger from the outside, the 2013 Outback is actually on a shorter wheelbase than previous models and just a bit wider, taller, and longer. Inside, the big news (for big guys like me) is that the rear-seat leg room has greatly improved: the rear seats recline, and there is now an a/c duct in the middle console. The trunk has gotten wider, and there is a bit more headroom, too.

For reference, my daily driver is a 2005 Outback 2.5XT, and the 2013 is a significant improvement. Now if I could just get it with a turbo, I might replace mine….) 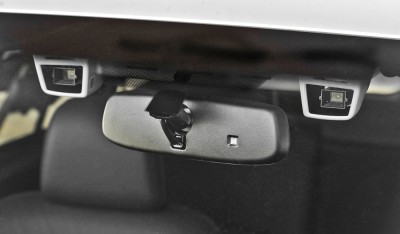 EyeSight is an all-new driver-assist system based on two interior-mounted cameras. When engaged, those cameras scan the area in front of the vehicle for vertical surfaces that represent a car, a wall, or any other significant obstacle, as well as track lane demarcation lines. The system supports adaptive cruise control, lane departure warning, and blocked acceleration avoidance.

Here’s an overview of some EyeSight-related features:

Crash avoidance: In essence, Subaru pairs this system with EyeSight to slow the car down (and eventually apply full brake pressure) if you approach an obstacle at a speed that could lead to a crash if braking were not applied.

Adaptive cruise control: Say that your cruising speed is set to 65 mph. If the vehicle in front of you slows down, your Subary will start to slow down, too. Should the person in front pick up speed, you automatically speed up to the preset speed. For EyeSight to work, however, the vehicle in front needs to be “acquired” by the system. The range limit for acquisition is 80 meters, or about 262 feet and change.

Sudden acceleration accidents: Pretend you’re merging onto a highway. The person in front of you accelerates, then has second thoughts and stops in the merge lane. Now, you’re looking over your shoulder, trying to find your way around this schmuck and onto the highway. You let your foot off the brake, preparing to make a run for it, but completely forgetting that there’s a car still parked in front of you. The EyeSight system notices that car and cuts off the acceleration, giving you time to notice and apply the brakes before rear-ending the aforementioned schmuck.

The EyeSight driver-assist system is a very nice frill, but with an MSRP of $1,295 (not including the required navigational system option), it’s not a must-have feature.

By the way, that navigation system is all–new, introduced in the 2012 model-year Impreza. It will be the new standard for the 2013 BRZ, XV Crosstrek (which we’re testing in Hawaii in a couple of weeks – tough life, we know), Legacy, and the Outback. Like all the navigation systems we’ve tested, it took some trial and error to get the system to understand our voice commands and connect to Bluetooth, but overall the system is on par with navigation systems in this class of vehicles. 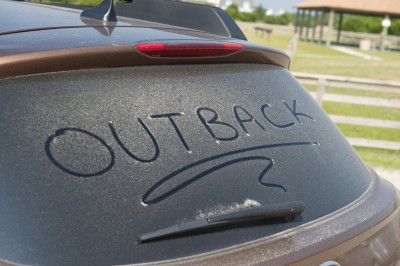 According to Maritz research (supplied by Subaru), Outback owners are three times as likely as midsize SUV drivers to go off-road at least monthly — so naturally, we took the two Outbacks to the beach. We spent most of our time on the hard sand, occasionally diving into the low waves.

We only got stuck once, thanks to some driving tips from Subaru: maintain momentum, gear down, and turn traction control off.  It seems that the combination of torque, weight, and maneuverability allowed us to do what other vehicles could not. The 2.5i we drove weighed 109 lbs less than the 3.6R, and with the significant difference in torque and hp, I figured it would struggle up the deep sand. It didn’t.