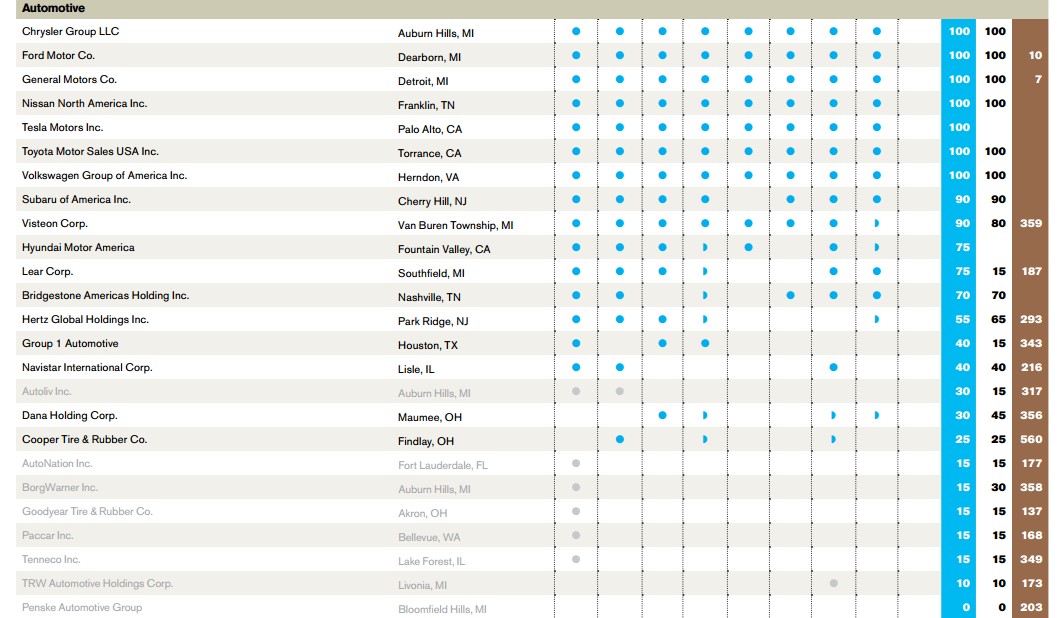 The Human Rights Campaign has just released its 2015 Corporate Equality Index, which rates America’s biggest companies on their LGBT-friendly policies. We’re happy to report that the auto industry picked up one A+ member since last year’s report was issued, but there’s also at least one curious presence near the top.

HRC’s 2015 CEI scores corporations across nine different areas. If a company fares well in the first eight, it can receive a perfect score of 100. However, companies can also lose 25 points for high-profile anti-LGBT problems. In fact, companies like Exxon that have no LGBT-friendly policies and headline-grabbing instances of homophobia earned scores of -25.

Surveys are sent to every Fortune 500 company based in the U.S. Other companies here and abroad can self-report if they like, though obviously, there’s no requirement that they do.

The 2014 Corporate Equality Index gave six automakers — Chrysler, Ford, GM, Nissan, Toyota, and Volkswagen — perfect scores. They’ve all received 100s again this year, as has a new entry, Tesla. Congrats to all, and Elon Musk, if you’re reading this: welcome to the fold!

Subaru clocks in with a very respectable score of 90. Once again, the company has fallen short on transgender-inclusive healthcare, but given Subaru’s reputation as being especially LGBT-friendly, we hope that will change soon.

The only other automaker on the 2015 CEI is, oddly enough, Hyundai, which remains on our very, very short list of Non-LGBT-Friendly Automakers. The company claims to have non-discrimination policies in place for LGBT workers, as well as health benefits for same-sex spouses and transgender employees. As a result, it’s earned a score of 70 from the HRC.

The problem is this: we know that Hyundai offers its white-collar workers LGBT protections and benefits. However, its blue-collar workers — the men and women who work on the company’s assembly lines — aren’t treated the same way. Although we’d expect this “two-state” policy to change over time, we’ve received no indication that it has. So, let the record show: we’re dubious. We’ve reached out to HRC for clarification. 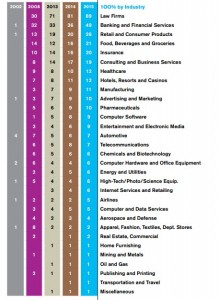 The good news is that LGBT employees continue to gain ground in their push for workplace equality. Generally speaking, the number of 100-point companies on HRC’s CEI has continued to grow over the past several years, and as marriage equality and other LGBT-friendly laws create greater respect for LGBT rights, we’d expect state laws and corporate policies to evolve alongside them.

In other words, we don’t want to say “there’s no going back”, because political movements like ours always progress in fits and starts. However, the future is looking pretty darned good for LGBT workers in the U.S.

The bad news is that homophobia continues to slow us down. The folks in charge of companies like Penske Automotive (CEI score: 0) can surely see the writing on the wall. But they’re digging in their heels, hoping in vain that time will begin to run backward and their regressive policies will come back in fashion. As my father used to say when I asked him for something highly, highly out of the ordinary: ain’t gonna happen.

And so, the auto industry is left in the middle of the pack. As you’ll see from page nine of the 2015 CEI, we have more 100-point companies than the oil and gas, real estate, and airline sectors. Heck, we’re even outpacing telecoms. But we have a long way to go before we catch up with the insurance industry, hotels, and a host of other industries.

So our message to you is: don’t stop pushing.