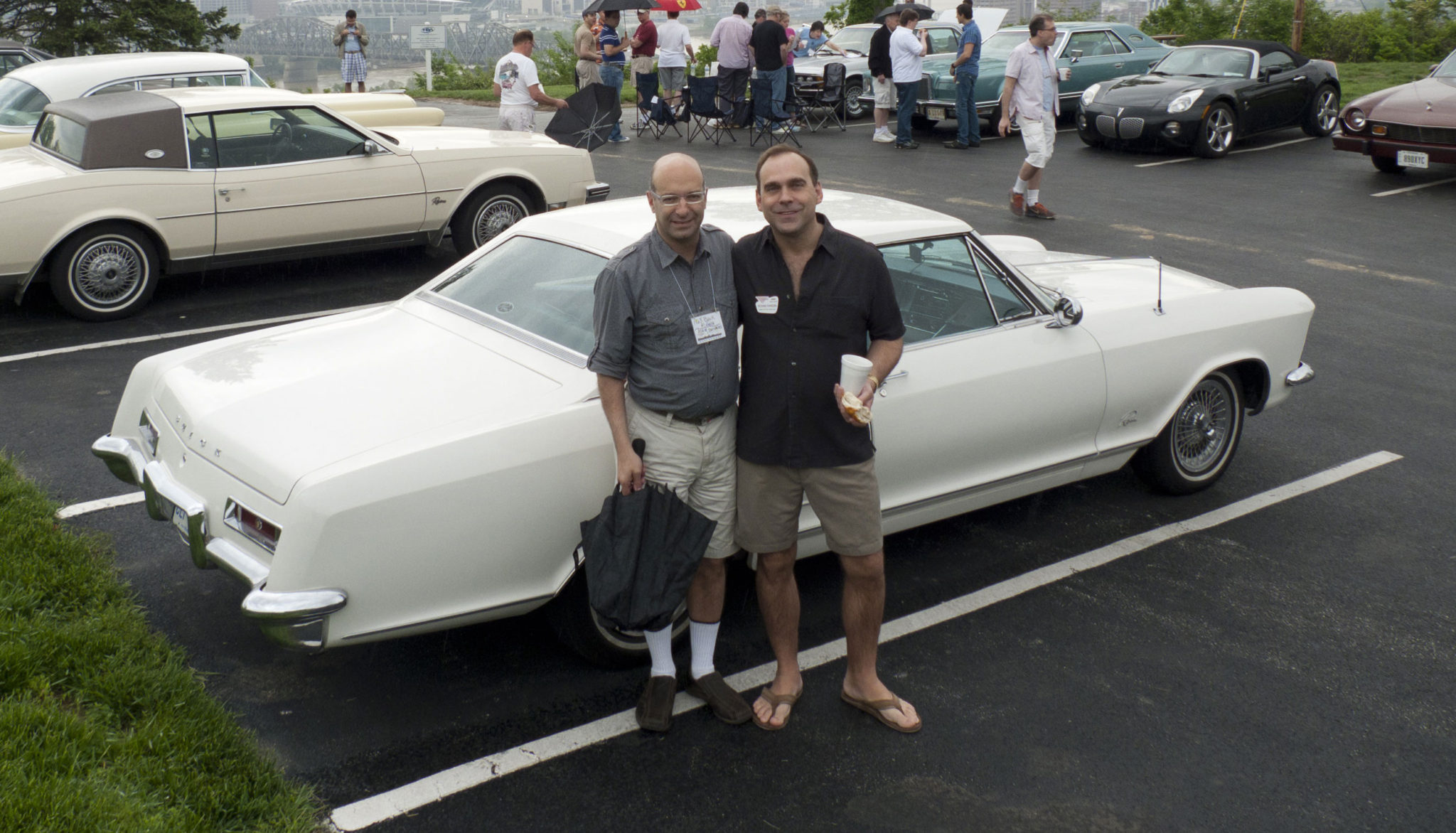 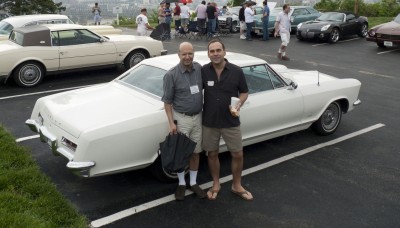 Last week, I wrote about my sit-down with General Motors’ Vice President for Global Diversity, Eric Peterson, who told me about GM’s efforts to reach out to the LGBT community. A few minutes after I wrapped up that interview, I wandered 20 feet across the floor of the 2012 Detroit Auto Show and got a slightly different perspective on GM, courtesy of Adam Bernard. (Pictured above at left, with partner, Rich.) As an added treat, we were joined by the lovely and talented Joe LaMuraglia, Communications Manager for GMC and a noted friend of Gaywheels.

Technically speaking, Bernard is GM’s Associate Director of Competitor Intelligence, but for the time we chatted, he wore a different hat — the one he sports as the chair of GM PLUS. “PLUS” is shorthand for “People Like Us”, and it’s GM’s official LGBT employee resource group. Bernard has been involved with the group since 2001, and he’s served as its chair since 2006.

Over the course of our half-hour together, we talked about a wide range of initiatives that GM has undertaken to ensure an LGBT-friendly workplace. Here are some of the high points:

What GM PLUS does
GM PLUS educates GM employees about what the company is doing “right” for LGBT workers and also what the company should be doing. Those education efforts affect all levels of GM staff, from engineers to marketers to the OnStar team to the folks on GM’s assembly lines. PLUS also advises LGBT workers on matters like health care and other benefits for same-sex partners.

The most successful work of GM PLUS
One of the best-received programs of GM PLUS has been its “Can We Talk?” workshops. “Can We Talk?” is a “fishbowl” exercise, and it’s become a common, effective way for workers at many companies to broach sensitive topics. Typically, “Can We Talk?” workshops involve one group — for example, LGBT employees — sitting around a table, discussing issues that arise in the workplace. Another group — say, executives — observes the first group, “eavesdropping” on their discussion. The group inside the fishbowl gets to air some grievances, and the group on the outside gains some new perspectives, and neither group has to deal with the hassle of direct confrontation. Bernard said that the workshops have been hugely successful and raised a lot of interest about GM PLUS within the company.

Bernard also mentioned the “It Gets Better” video that PLUS helped develop for GM. Both he and LaMuraglia described it as a meaningful, moving experience, and frankly, that shows in the clip.

What progress has been made on LGBT awareness within GM?
Bernard said things have changed dramatically within GM over the past decade. One of the most visible examples of that has been the creation of advertising with LGBT-specific content, which began around 2010 when Buick first sponsored the OUT 100. Bernard pointed out that dealers in many markets have been doing LGBT-oriented advertising for years, but now, it’s coming from GM HQ, too.

Bernard added that each of GM’s brands now reaches out to the LGBT community in different ways. GMC, for example, hosts breakfasts with Dot429, the gay and lesbian professional network. (LaMuraglia corrected him: “They’re brunches.” We laughed.) Chevy recently sponsored the “Out & Equal” summit and had a Chevy Volt on display — the only automaker to bring a car to the conference. And of course, Buick has worked closely with straight ally Hudson Taylor on Athlete Ally, a nonprofit that encourages “athletes, coaches, parents, fans and other members of the sports community to respect all individuals involved in sports, regardless of perceived or actual sexual-orientation or gender identity or expression.”

But perhaps the thing of which Bernard is most proud is that in 2007, GM became the first — and to date, only — automaker to support a fully inclusive ENDA. Bernard attributes this in part to the workshops that GM PLUS has conducted with executives, which have led to more than a few “aha” moments. During those workshops, Bernard tells attendees that if they didn’t work for GM, they could legally be fired for being gay or even being perceived to be gay. “If you wear too many pink shirts and your boss thinks you’re gay, they can fire you, and you have no legal recourse. And the jaws just drop around the room.” 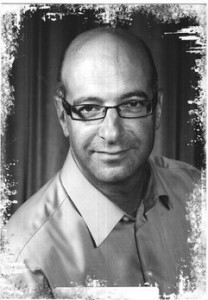 What’s been your most rewarding experience?
Bernard said that there have been lots of great experiences working with GM PLUS, but one of the most recent involved a workshop held at a manufacturing facility in Indianapolis. He and his colleagues were a little nervous going into the meeting, not sure of what to expect, but their preconceptions quickly dissipated when they found the vast majority of workers to be very welcoming. In fact, many had close LGBT connections — gay brothers, transgender sisters, and so on.

The highlight of that day came when they were speaking to a manager who said quite frankly that on a personal level he didn’t fully “understand” homosexuality, but that he wanted to create a comfortable, welcoming environment for his employees. It was rewarding and inspiring to see that this man was able to leave his personal opinions at home and look out for the needs of his workers.

What about on the customer front?
Around seven years ago, PLUS helped convince GM’s internal research group to begin collecting data on LGBT customers: “Until that point we’d ask, are you married and how old you are and all that stuff, but we didn’t ask anything about sexual orientation or gender identity.” In that short span of time, GM has already begun to debunk some stereotypes about LGBT shoppers, while reaffirming others. For example, LGBT consumers don’t necessarily earn more than their straight counterparts, as commonly believed. However, they do typically have more disposable income. (That might be because of the “double income, no kids” factor, although as Bernard pointed out, the “no kids” part of the equation is starting to change.)  Bernard also said that LGBT shoppers have a greater tendency to purchase a vehicle based on its personality, because it expresses who they are.

What’s next?
Bernard said that keeping up with the HRC’s criteria for the Corporate Equality Index is a big priority for GM. He and others hope to address some of the company’s shortcomings on transgender issues — particularly where health benefits are concerned — before the end of 2012. With some hard work and a little luck, GM will be back at a full 100 score in time for the next CEI.

He also said that internal education is increasingly important, especially at a global level. PLUS aims to lay the foundation for consistent treatment of LGBT employees and their partners as they move throughout GM’s worldwide network.

Continued support of ENDA is also on the PLUS agenda. And Bernard isn’t just adamant about it because it’s good for GM employees — it’s also good for business. As Bernard pointed out, the LGBT community supports the companies that support it.

Finally, Bernard said that GM is considering ways to gross up the salaries of LGBT employees to compensate for the imputed tax on domestic partner health benefits. This is a new field of discussion taking place at companies across the country, and GM hasn’t yet determined how best to resolve it, but the talks have begun.

At the end of the day, a workplace that is welcoming and sensitive to the needs of LGBT employees makes for a better, more efficient company. As Bernard tells LGBT colleagues, “You shouldn’t come to work trying to figure out which lies you spun to which coworker about what you did over the weekend, because that’s not productive. You should come to work focused on your job, and you should be able to put a photo of your wife, partner, or whomever on your desk.”